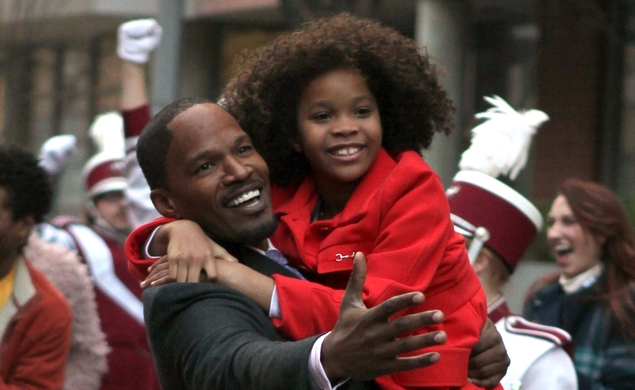 December! A busy time at the box office, and one that manages to fold in a wide variety of offerings, from family-friendly fare (Annie) to mostly pleasing romantic comedies that don’t understand how actual journalists do their jobs (Top Five) to whatever Exodus: Gods And Kings was about (gods? kings? both?). If you were busy around the middle of last December—or, alternately, if you were just loading up on Oscar contenders when it came time to spend your movie-going dollars—you might have missed a slew of wide releases that, conveniently enough, are all hitting home video this very week. Although Annie might have proven more powerful than the original (and beloved) feature film of the same name, it does boast one thing its predecessor couldn’t even dream of including: Jamie Foxx singing in a helicopter. (I’m not joking, this is actually a huge selling point of the film.) Chris Rock’s Top Five didn’t feature any helicopter-set singing, but it is a raucous chronicle of fame gone totally awry. Exodus: Gods And Kings is…available in 3-D?

If you’re looking to round out your “childhood favorites” collection, Sony is also releasing both My Girl (the bees, the bees) and Troop Beverly Hills on Blu-ray this week. Also on Blu-ray? Aguirre, The Wrath Of God, which could certainly be a part of someone’s own childhood favorites pack, if said person was raised on a steady diet of Werner Herzog and screaming in the Amazonian jungles. Hey, parenting is hard. Robert Greene’s very well-regarded Actress is available on DVD this week, while the underseen Aussie crime thriller Son Of A Gun hits Blu-ray and DVD, along with the Academy Award-nominated animated adventure Song Of The Sea.