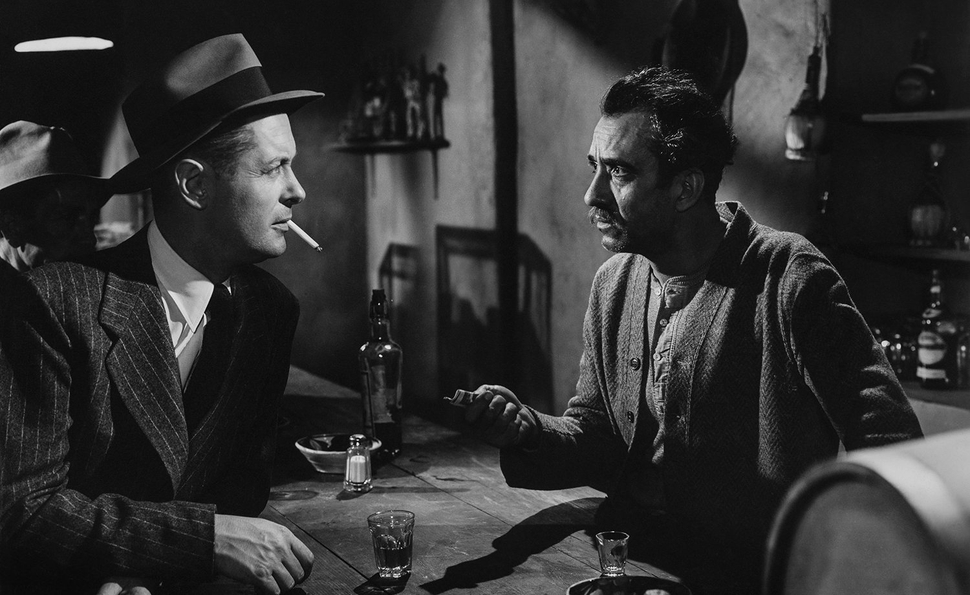 In 1947, actor Robert Montgomery received his first directing credit on Lady In The Lake, an experimental film noir that attempts to capture the first-person perspective of one of Raymond Chandler’s Philip Marlowe novels by shooting the entire movie with a subjective POV camera. Lady In The Lake wasn’t a lark for Montgomery. He helmed three more movies before he shifted his talents to television and politics in the 1950s, and then one more in 1960 before he effectively retired from show business. Montgomery had nearly two decades in Hollywood under his belt before he stepped behind the camera, but judging by the few films he directed, he had the chops to be one of his generation’s greats.

The same year Montgomery made Lady In The Lake, he directed and starred in Ride The Pink Horse, a noir which in many ways is even odder, though not as formally daring. Screenwriters Ben Hecht and Charles Lederer adapt a novel by In A Lonely Place author Dorothy B. Hughes. The film follows a vengeful drifter named Lucky Gagin who plans to blackmail fugitive war profiteer Frank Hugo (Fred Clark) in the small New Mexico town of San Pablo. Over the course of the days leading up to, and just after, San Pablo’s annual fiesta, Gagin skulks around town, accepting the hospitality of gregarious carousel operator Pancho (Thomas Gomez, who was nominated for an Oscar for this role) and motormouthed teenage Native American Pila (Wanda Hendrix), while trying to avoid Hugo’s scheming female accomplice Marjorie (Andrea King) and the persistent federal agent Retz (Art Smith).

Ride The Pink Horse is a curious film, light on the action and mystery that usually drives noir. The focus here is more on local color, as eccentric characters gather in a place that doesn’t exactly feel like America. Montgomery appears to be in no hurry to get to any of the story’s violent confrontations. Instead, he and Hecht/Lederer include a lengthy scene of Gagin trying and failing to order a whiskey in a cantina that only serves beer, wine, and tequila—Gagin drinks one shot of the tequila, but declines a second, saying, “I don’t want to burn a hole in my neck”—and a scene where Gagin orders lunch for Pila, and explains to her what a fruit cocktail is. At times, it seems like Ride The Pink Horse’s plot is just a thin excuse for funky little lines of dialogue, like Retz telling Gagin, “I like to eat with my hands… gets me closer to the food,” or Pancho comforting a stabbed Gagin by saying, “When you’re young, everyone sticks knife in you.”

Hughes’ story also gives Montgomery and cinematographer Russell Metty some chances to play. Ride The Pink Horse doesn’t have one big visual gimmick like Lady In The Lake does, but it does feature several stunningly realized setpieces. The film opens with one long, wordless take of Gagin arriving at a San Pablo Greyhound station, where he stashes the evidence he has against Hugo; later, Montgomery and Metty stick a camera on Pancho’s carousel, so that every few seconds, it comes back around to Pancho being beaten up in the background. Throughout the film, Montgomery makes some striking blocking choices, like putting a rear-shot of Gagin in the extreme foreground of the frame while keeping the villains at a distance. And he and editor Ralph Dawson have some fun with match-cuts and dissolves, including one honey where a grotesque giant puppet—Zozobra, the god of bad luck—gives way to Hugo’s slack, sinister face.

Ride The Pink Horse is rarely talked about as a noir classic—and it shouldn’t be. It’s slackly paced and low on drama, and while Montgomery makes a gutsy choice in playing Gagin as somewhat dim and abrasive, that also makes the hero hard to take, especially during a climactic sequence where he’s so concussed, he can barely form a coherent sentence. But if a director’s job is to come up with creative ways to convey who characters are and the deeper meaning of their circumstances, Montgomery earns a gold star for Ride The Pink Horse. In nearly every scene, he introduces a shot, a prop, a set, or a person that helps explain the world where Gagin finds himself. This is a disorienting shadow-verse where even the “whiskey” doesn’t taste right.

In addition to a radio adaptation of Ride The Pink Horse (featuring the voices of Montgomery, Hendrix, and Gomez), Criterion’s new Blu-ray contains a fact-filled commentary track by noir experts Alain Silver and James Ursini, and an interview with In Lonely Places: Film Noir Beyond The City author Imogen Sara Smith, who explains how the film fits into the small subset of noir that take place in exotic locations, where none of the usual social rules apply.