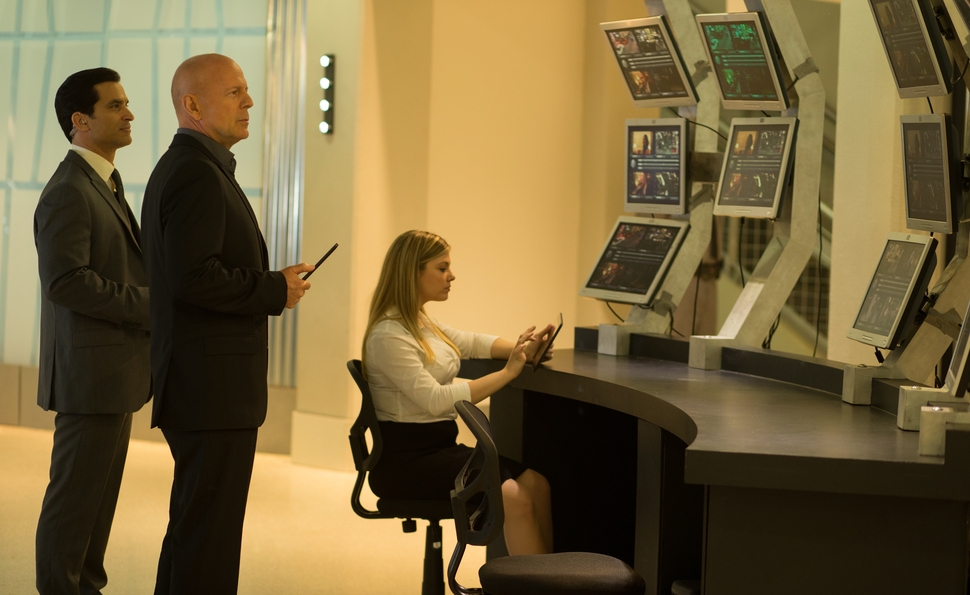 Bruce Willis doesn’t get enough credit for being a prolific fixture in terrible films, unlike his peers John Travolta and Nicolas Cage. That’s probably because his countless terrible films are so forgettable that they beg to be ignored in the same moment they’re being indifferently consumed, presumably on late-night cable or home video. Though he has a few cult classics like Color Of Night and Hudson Hawk on his résumé, most of Willis’ crimes against cinema are like the dour new science-fiction feature Vice, which is so sleepy and indistinct that it’s easy to forget he’s in it, even though he’s the lead.

Vice stars Willis as Julian, the impresario behind a virtual palace of sordid wonders where for the right price, libertines can live out their most debauched and illegal fantasies, because their crime victims are human-like androids. One day after being brutally murdered by one of the sickos who inhabits Julian’s Vice resort, a beautiful robo-person named Kelly (Ambyr Childers) wakes up like a sex-toy Pinocchio, discovers she’s something like a real human, and flees her cyber-prison. That’s fortuitous for the film’s budget, because extensively mapping out the nature of Vice might cost money and require some ingenuity in depicting all those fantasies and pleasure-bots. But once Kelly goes rogue, the film dedicates itself to the much more cost-effective world of people chasing each other through dimly lit, largely unpopulated blue-white buildings.

Kelly joins forces with the lovestruck engineer (Bryan Greenberg) who created her in the image of his beloved dead wife, and she’s targeted by Roy (Thomas Jane), a renegade cop of an older school. Roy doesn’t much cotton to perverts going to sleazy cyber-pleasure resorts for sex with androids, instead of good old-fashioned flesh-and-blood hookers.

Willis seems to have shot his entire part as the God/designer of this consequence-free, sinful world of sex and murder in a day or two. The entire film is a warmed-over rehash of Westworld, combined with the shakiest of Philip K. Dick adaptations, the ones that seem to be the product of people who know Dick only as a purveyor of vaguely freaky shit that can be turned into hooky science-fiction thrillers. There are so many genuine adaptations of Dick’s work, running the gamut from brilliant to dreadful. Why on earth would anyone waste time on a film that merely feels like it was based on one of his short stories? Perversely low-budget and oddly devoid of imagination, Vice seems less like a proper film than a bargain-basement SyFy pilot, shot on the cheap and drafting off Willis and Jane’s star power. It’s about androids aching to be real, but it doesn’t have an ounce of genuine humanity in its tin heart.