The glorious lightness of North By Northwest 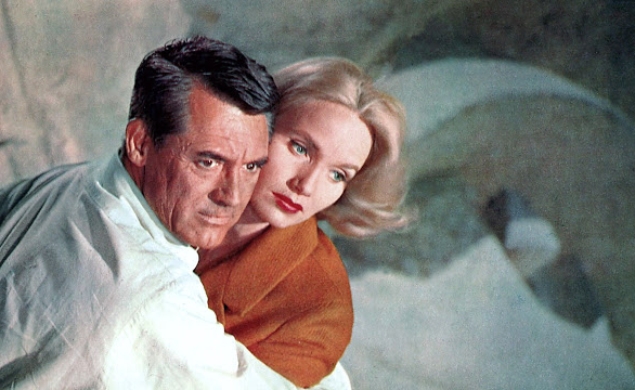 As pretty much the ultimate auteur, Alfred Hitchcock generally gets the lion’s share of credit for the films he made. Yet North By Northwest is a truly collaborative endeavor. While Hitchcock deserves much of the credit for the film’s elegant construction, spellbinding storytelling, and incongruously breezy tone, I would argue that equal credit belongs to screenwriter Ernest Lehman’s endlessly clever, quotable, and perfectly formed script, as well as Cary Grant’s charming performance.

Grant was among the most ironic of the great actors of Golden Age Hollywood. There was almost invariably a wink and a sly nod in his signature performances that let audiences know that he was in on the joke, that no matter what was happening to him onscreen, he never took it too seriously. So even though Grant’s advertising agent Roger Thornhill spends North By Northwest literally running for his life across a series of picturesque tableaus, most notably Mount Rushmore, he never really seems to be in much danger. He’s never so terrified that he can’t drop the perfect bon mot or flirt outrageously with Eva Marie Saint’s Eve Kendall. The whole “running for your life” thing even seems to strike him as a bit of a laugh, a way to liven up an otherwise dull stretch of living.

In that respect, Grant would have made a perfect James Bond, at least in the breezier early installments of the series. He cuts a distinctly Bond-like figure here, a suave and debonair exemplar of manly courage who’s also quick with a quip or a joke. Sure, he’s an ad man, but he’s accidentally pushed into the role of amateur spy after he’s mistaken for a decoy and framed for murder at the United Nations. In time-honored cinematic tradition, every newspaper in the country has his unmistakable face on its front cover, but he doesn’t seem too concerned about exposure. In fact, all it takes is the slightest alteration to his appearance to get the bad guys off his trail.

On the run from the police, spies, and various other baddies, Roger finds himself on a train with Eve, the girlfriend of head bad guy Phillip Vandamm (James Mason, all oily European menace), a tricky double agent whose sympathies often seem to be in flux. On the train, she seems to fall instantly for Roger as they fall easily into risqué flirtation, which feels less like a plot contrivance than a natural response to being confronted by a man who looks like Cary Grant in his dashing prime. Vandamm and his main henchman Leonard (Martin Landau, one of the creepiest secondary villains in film history) pursue Roger relentlessly, but he prefers to hide in plain sight, most notably at a public auction where he makes a point of making a terrible nuisance of himself.

Re-watching North By Northwest for this project, what impressed me most about it was its ebullient lightness. Hitchcock’s films are often dark and tormented, shadowy and filled with psychosexual menace. It’s worth noting that this glorious trifle of an adventure film starring the world’d most charming man fell between two of Hitchcock’s heaviest and most tormented films: 1958’s Vertigo and 1960’s Psycho. After Vertigo, it must have felt like a vacation making a film that is so fundamentally about so little, one that’s ultimately just a mad goose chase for a MacGuffin livened up by a crackerjack script, the explosive sexual chemistry of Grant and Saint, and two of the most famous setpieces in film history, one where Roger must outrun a crop duster in an open field, and one where Roger and Eve tumble down Mount Rushmore to get away from the sinister clutches of Vandamm and Leonard.

North By Northwest shares some of the same giddy lightness as Some Like It Hot. Every element is in perfect unison, from the set design to the cast to the script to the costumes to Bernard Herrmann’s score to Saul Bass’ title design. Screenwriter Lehman set out to make the ultimate Alfred Hitchcock movie and with some talented collaborators, ended up making a perfect piece of entertainment, even if it lacks the dramatic heft of some of Hitchcock’s masterpieces.