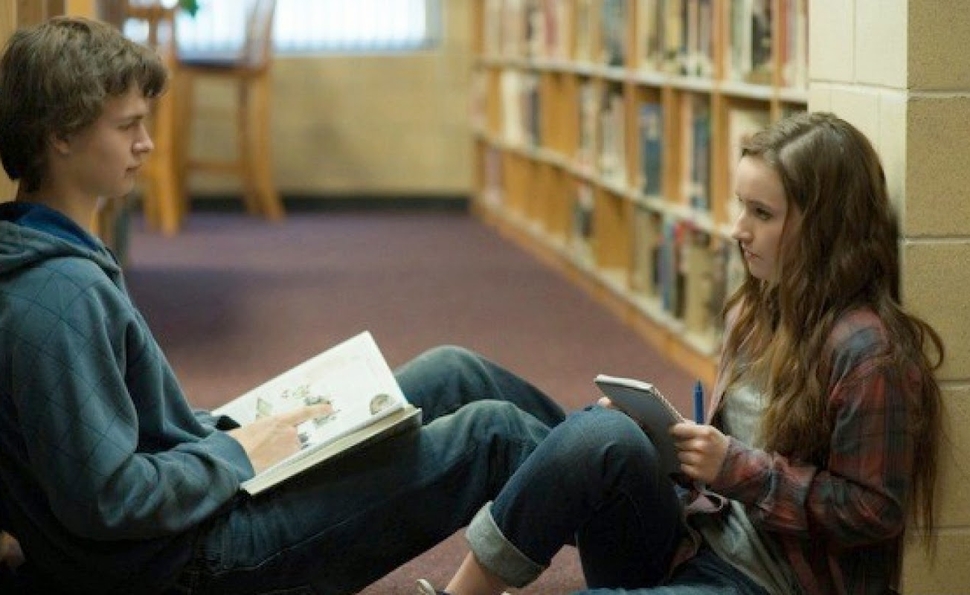 With the exception of some avant-garde shorts playing in the Wavelengths section, pretty much every film at the Toronto festival (and elsewhere) involves men, women, and/or children in some way. Novelist Chad Kultgen apparently wanted to ensure that his 2011 novel was perceived as a grand statement about the human condition, however, and Jason Reitman’s film adaptation, which had its world premiere here at TIFF, retains the book’s all-encompassing title. In truth, Men, Women & Children, like such predecessors as American Beauty and Little Children, is concerned almost exclusively with white, middle-class suburbia, which it perceives as thoroughly debased—in this case, by the pernicious influence of the Internet, with its attention-usurping tweets and texts, its time-sucking MMORPGs, its libido-warping hardcore pornography, etc. etc. OMFG STFU.  Narrated by Emma Thompson, who recites “shockingly” frank and vulgar text with ironically cultured placidity, the film flits back and forth among an unnamed city’s troubled residents: a married couple (Rosemarie DeWitt and Adam Sandler) whose nonexistent sex life leads her to the affair-hookup site Ashley Madison and him to a high-priced escort; a teenage girl (Kaitlyn Dever) whose paranoid mom (Jennifer Garner) obsessively tracks her every move online; a porn-obsessed boy (Travis Tope) who’s so consumed with ostensibly deviant acts (basically just mildly masochistic JOI, i.e. jack-off instructions) that he can’t have vanilla intercourse with the school hottie (Olivia Crocicchia); and many more.

Individually, each of these mini-narratives is at best egregiously tone-deaf. Intercut to form an alarmist state of the union address (complete with a pretentious framing device involving Voyager 1’s journey beyond our solar system), they collectively cross the line into outright laughable. Reitman has never exactly been renowned for his subtlety, but between this ghastly misfire and Labor Day, he seems to have completely lost touch with any notion of how human beings actually behave; this is the kind of film in which a passionless marriage is signified by scheduled sex, complete with graceless lines like “It’ll have to be quick.” The talented ensemble cast—which also includes Dean Norris, Judy Greer, Ansel Elgort, and Dennis Haysbert—tries to keep these caricatures vaguely human, but it’s hard to give a performance with little SMS bubbles and Twitter timelines constantly popping up over your head. Men, Women & Children is particularly hard on the middle group, repeatedly suggesting that poor mothering is to blame for what ails this community, whether that involves being overprotective, overindulgent, or just plain absent. Mostly, though, the movie just comes across as a borderline-hysterical screed—the Reefer Madness of the Internet Age.

On the surface, Lucas Belvaux’s Not My Type (pompous alternate title: Men & Women) appears equally unpersuasive, with a high-concept premise that could easily serve as the basis for a truly dire rom-com. He’s a philosophy professor who quotes Kant in casual conversation and doesn’t even own a TV set! She’s a hairdresser who’s obsessed with Jennifer Aniston’s love life and spends her weekends performing at karaoke bars! How will this relationship ever work?!? Rather than mine such a goofy scenario for comedy, however, Belvaux (Rapt) takes it seriously, allowing both lovers to emerge as complex people who transcend their respective stereotypes, even as they also embody them. The notion that opposites attract is such a tired cliché that, paradoxically, it was ripe for reassessment; working from a novel by Philippe Vilain, Belvaux painstakingly explores all the reasons why it’s true and false, so deftly that it’s hard to be sure whether one is meant to be rooting for the couple or against them. With the wrong actors, it might not have worked, but Not My Type features two of the best performances I’ve seen all year (not just at TIFF), with Emilie Dequenne tearing into her perpetually cheerful dynamo—a role light years removed from her feral, star-making turn as the Dardennes’ Rosetta—and Loïc Corbery finding startling depth and a rich vein of dry humor in his intellectual commitment-phobe. Because a glance at the film’s synopsis does it no favors, it’s buzz-free at the moment, and is liable to slip under the radar, just as all of Belvaux’s previous films have. That’d be a shame, as he’s exactly the sort of underrated talent a festival like this one should help folks discover.

One of my discoveries so far this year is David Oelhoffen, whose second feature, Far From Men (pompous alternate title: Men), arrived here fresh from a Competition berth at Venice. Its primary selling point is that it features Viggo Mortensen performing entirely in French and Arabic, though that’s only a novelty because few have seen the other films (like Everybody Has A Plan, from Argentina) in which he eschews English. Besides, this isn’t a film that relies much on dialogue. Though it’s set in Algeria in 1954, right as the country’s war for independence began in earnest, Far From Men is essentially a Western, with Mortensen as the reluctant gunslinger and Reda Kateb as the captive “Indian” (Arab) being transported from a remote outpost to civilization, where he’ll stand trial for murdering a cousin. This plot bears some similarity to that of Tommy Lee Jones’ forthcoming The Homesman, which debuted at Cannes earlier this year (but is not at TIFF, for some reason); Oelhoffen has the advantage of stunning locations that are less cinematically familiar than the American plains, however, and he opts to ignore women altogether.  Instead, the film chronicles the mutual respect that grows between Mortensen’s schoolteacher (perceived as an interloper by both the French and the Algerians, despite having been born there) and Kateb’s prisoner (who’s quickly freed, though he insists on being escorted to town for reasons revealed late in the game). As a Western, Far From Men never strays far from genre convention, but there’s something to be said for an old-fashioned, doggedly sincere paean to nobility, honor, and courage, especially one that periodically elevates the pulse with expertly mounted standoffs that allow Mortensen to play another simmering badass. Had the movie actually been made in 1954, it would have been directed by Anthony Mann, starring Jimmy Stewart. With no subtitles.

To round things out, let me throw in a qualified recommendation for Goodnight Mommy, an Austrian shocker featuring virtually no adult males. (Pompous alternate title: Women & Children.) This wasn’t originally on my schedule, because co-director Veronika Franz, making her feature debut, is primarily known for her screenplay collaborations with Ulrich Seidl (Import Export, the recent Paradise trilogy), and I’m not the world’s biggest Seidl fan. One review out of Venice compared the film to Dogtooth, however, and that was enough to make me plenty curious. As it happens, Goodnight Mommy isn’t so much weird as it is just plain disturbing...though the initial appearance of the titular mother, wrapped in facial bandages that make her look a bit like the masked heroine of Eyes Without A Face, raises questions that the film never fully answers. Mom also behaves oddly with her identical-twin sons—or perhaps they behave oddly with her. This aspect of the film is tricky to discuss, because Franz and her co-director/co-writer, Severin Fiala, have made it deliberately ambiguous; there’s no question from the outset that at least one member of this truncated family is delusional, but which one it is remains uncertain until the very end. (To the film’s credit, the two possibilities are equally upsetting; neither one seems preferable.) For a good long while, mere creepiness reigns, but my screening saw multiple walkouts during the finale, which takes a sudden turn into prolonged torture—not quite as horrifying as Audition’s closing reels, but in the same wince-worthy ballpark. Whereas Audition’s gore is in service of a provocative subtext, however, the circumstances here seem largely removed from any real-world concerns, with little or no elemental resonance. Whether that’s a deal-breaker will be a matter of personal taste; those seeking a straightforward nightmare machine (and free from any phobias about damage to the mouth and lips) should give Goodnight Mommy a look if/when it escapes the fest asylums.

Also seen: I concur with Scott about the Troubles thriller ’71, which works magnificently as a pure action movie, even if it gets a bit too cynical for my taste in the homestretch. But I was less enamored than Noel (or than the Venice jury, which just awarded it their top prize) with Roy Andersson’s A Pigeon Sat On A Branch Reflecting On Existence. I saw the first film in Andersson’s trilogy, Songs From The Second Floor, twice at TIFF 2000, and have watched it three or four times since; it remains one of my most thrilling festival experiences—a truly visionary work. Never felt the need to revisit You, The Living, though, despite quite liking it, and this third variation on what’s now become a formula (even the music is near-identical from film to film) left me disappointingly cold. There are still sublime moments here and there, most of which Noel described yesterday, but it feels as if Andersson is running out of strong ideas for this unusual mode of filmmaking, and he’s starting to get overtly preachy. Hopefully, the conclusion of the trilogy means that we won’t have to wait six or seven years to see what he does next.

For better or worse, one never has to wait more than a few months for the next Takashi Miike picture. Over Your Dead Body is one of his amusing mediocrities, and boasts a striking similarity, in its willful confusion of real life with rehearsals for a play, with Olivier Assayas’ Clouds Of Sils Maria (see Scott’s report on Day One). The buildup is fairly tedious, apart from some striking set design (if what’s shown here is typical of Japanese stage productions, they make Broadway look like dinner theater), but the Grand Guignol finale is a fair bit of grotesque fun. Less fun, but more artful overall, is Fabrice du Welz’s Alléluia, yet another movie based on the notorious real-life murders of Martha Beck and Raymond Fernandez. (Previous examples include The Honeymoon Killers and Deep Crimson.) Du Welz sticks too closely to the facts to generate much suspense or horror, and the film becomes overly repetitive; as an exercise in claustrophobic close-ups and unnerving sound design, however, it’s sporadically effective.

Auteurist favorites Laurent Cantet and Martín Rejtman haven’t done their best work this year. Cantet’s last film, Foxfire: Confessions Of A Girl Gang, hasn’t even been released in the U.S., and his latest effort, Return To Ithaca, seems likely to share that fate; it’s a laborious Havana-set Big Chill in which a handful of former radicals bemoan their current circumstances, trade recriminations, and seemingly begin every other sentence with some variation on the phrase “Remember that time we…?” Rejtman’s Two Shots Fired, by contrast, serves up a placid series of largely unrelated vignettes, indulging in drollery for drollery’s sake. Two shots do in fact get fired, into a head and a stomach at point-blank range; it’s typical of the film’s ultra-low-key approach that the bullets do no real damage.

Finally, I won’t say much about The Drop, since it’s about to be commercially released and hence properly reviewed. I dug it, though. Dennis Lehane (who wrote the screenplay this time, as well as the source material) remains a master of seedy criminal minutiae; we’re clearly experiencing The Golden Age Of Tom Hardy, comparable to Gary Oldman’s protean ambition ca. 1986–92; and seeing James Gandolfini again made me verklempt.