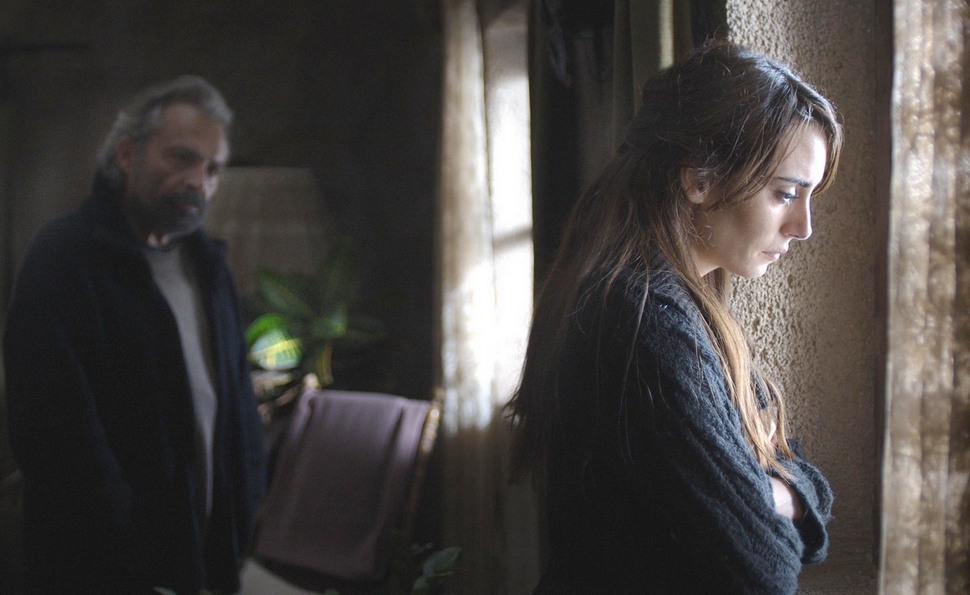 A deserving winner of the Palme D’Or at this year’s Cannes Film Festival, Nuri Bilge Ceylan’s Winter Sleep may have a Chekhovian richness to its sprawling tale of a wealthy man isolated by his own vanity and arrogance, but the quote above, a favorite from the Elmore Leonard-inspired series Justified, kept popping into my head as Ceylan’s hero loped into one toxic interaction after another. That Aydin (Haluk Bilginer), the proprietor of a mountaintop hotel in Anatolia and the de factor ruler of the village below, cannot understand why people detest him elevates Winter Sleep from the story of a misanthrope’s folly to an epic tragedy of astounding dimension. Over nearly 200 minutes, Ceylan patiently details Aydin’s life inside and outside his ivory tower: the poor villagers who resent his ruthless debt collection and his distaste for the religious community; his much younger wife Nihal (Melisa Sozen), who’s grown restless from a suffocating lack of agency; his sister, who has bitterly retreated to the hotel after divorcing an alcoholic; and the laptop where he wants to write a history of Turkish theater, but instead pens an inflammatory column for the local paper.

Ceylan returns to the desolate terrain of his last film, 2011’s haunting procedural Once Upon A Time In Anatolia, but by staying within the confines of the hotel and the village, he gives the impression of Aydin as a king who cannot comprehend the resentment of his subjects. There’s a lot of talk in Winter Sleep—at least two reel-long chunks of dialogue, and plenty of generously allotted scenes around them—but it’s wholly engrossing, partly because Ceylan doesn’t paint Aydin as an ogre, but a man who wants to seem reasonable and helpful and giving, but has no respect for anyone’s dignity and pride. As much as the film’s subtle tragedy registers on Bilginer’s haggard face, Sozen is equally compelling as Nihal, a young woman who not only bristles from Aydin’s controlling nature, but is isolated from the rest of the village by being associated with him. The word “sympathy” doesn’t really apply to Ceylan’s treatment of Aydin, but it’s a mark of the film’s complexity that it understands him so fully.

Much like last year—when I zipped through Blue Is The Warmest Color, Stranger By The Lake, and Only Lovers Left Alive—I spent most of Day One luxuriating in Cannes favorites. (Leaving my poor colleague, Noel Murray, to see the awards-trolling courtroom drama The Judge, which ate up four screens simultaneously and threw the press schedule into disarray.) Next up after Winter Sleep was Two Days, One Night, the latest from the Dardenne brothers (Rosetta, L’Enfant, Lorna’s Silence), whose movies are so consistently riveting that it’s become a running joke. (“What did you think of the Dardennes” “Yawn. Another masterpiece.”) Of the films they’ve made, Two Days, One Night has the catchiest logline: Marion Cotillard stars as a factory worker who stands to lose her job unless a majority of her fellow employees (nine out of 16) vote to give up their bonuses in order to keep her around. Already in recovery from crippling depression, she embarks on a desperate and humbling mission to plead her case to every last person.

Try as they might, the Dardennes can’t quite avoid the schematic trappings of their premise, which leads to stark conclusions about capitalist society, the virtues of self-sacrifice, and basic human nature. But their heroine’s encounters with her co-workers vary widely—some tearfully pledging to help, others declining with deep regret, still more furious that she would put them in such a position—and her additional battles against her own shame and despair ratchet up the tension all the more. Two Days, One Night is a Rosetta for the disappearing middle class, replacing the trailer-bound scrapper of the earlier film with a wife and mother of two who’s clinging just as fervently to a lifestyle that’s in serious danger. But here, the way others express and suppress their altruistic sides makes the difference.

A day of outstanding female performances continued with the trio in Olivier Assayas’ The Clouds Of Sils Maria, though Juliette Binoche and Kristen Stewart—as a famous stage and screen actress and her personal assistant, respectively—enjoy far more screen time than Chloë Grace Moretz, who plays a scandal-ridden young star who agrees to star in a play with Binoche. Though its insights into show business are not nearly as strong or comprehensive as those in Assayas’ best movie, 1996’s Irma Vep, and his script seems a draft or two away from a clearer, more disciplined vision, The Clouds Of Sils Maria feels like an Ingmar Bergman film filtered through a different sensibility. In the most persuasive scenes, Binoche prepares to re-stage the play that launched her career—only this time as the older of two women, one middle-aged and one 20 years younger, who have an affair that ends tragically—by running lines with Stewart, but Assayas blurs the distinctions between Binoche and the part, her actual relationship with her assistant, and the images both actresses have in real life. Stewart, in particular, is a revelation, proving that the same disaffected air that has led critics to dismiss her as flat and vacant can be deployed with subtlety and purpose. Assayas leaves audiences with a lot to unpack, but I’m not convinced that he’s worked his misshapen film out entirely.

Horror fans have been buzzing about David Robert Mitchell’s It Follows ever since it was snuck out during Critics Week at Cannes, but it’s better than I even allowed myself to imagine. Mitchell’s accomplished debut feature, The Myth Of The American Sleepover, recalled a Midwestern Dazed And Confused in its loose-knit, period-rich sketch of teenage life. It Follows more or less takes the world of that film and introduces a supernatural menace of relentless, spine-tingling creepiness. The “it” of the title can appear in any form, but only the person being hunted can see it. The good news? It moves very slowly. The bad news? It just keeps on coming. Among other things, It Follows makes an argument for the effectiveness of slow zombies, but here they can’t be brained, and thus remain committed to perpetual pursuit. Mitchell enhances the film with funny, casually observed hangout scenes of the Sleepover kind—and a teen-sex metaphor that’s best discovered cold—but his cinematic effects are every bit as brilliant as his conceit. The sound design during the scary scenes is delivered with bold, teeth-rattling amplification, and the camera suggests a foreign presence through odd zooms and unexpected angles. It Follows is the best independent horror film I’ve seen since The House Of The Devil; it took a good 15 minutes afterwards for my skin to stop crawling.

Also seen: Continuing my day of cherry-picking from other festivals, the Berlin favorite ’71, from first-time feature director Yann Demange, is a taut, impeccably executed thriller that applies a behind-enemy-lines scenario to an urban warzone—in this case, Belfast during The Troubles. Jack O’Connell plays a British Army private stuck in hostile territory, but the effort to rescue him reveals dissension within his own ranks, on top of the IRA threat. And I’ll add to the hosannas that greeted Adam Wingard’s The Guest at Sundance, with special mention of its John Carpenter-indebted ambience and Dan Stevens’ performance as a charismatic soldier who arrives to comfort and assist the family of a fallen comrade. I’ll have much more to say about that film’s sinister delights when it comes out in a couple of weeks.