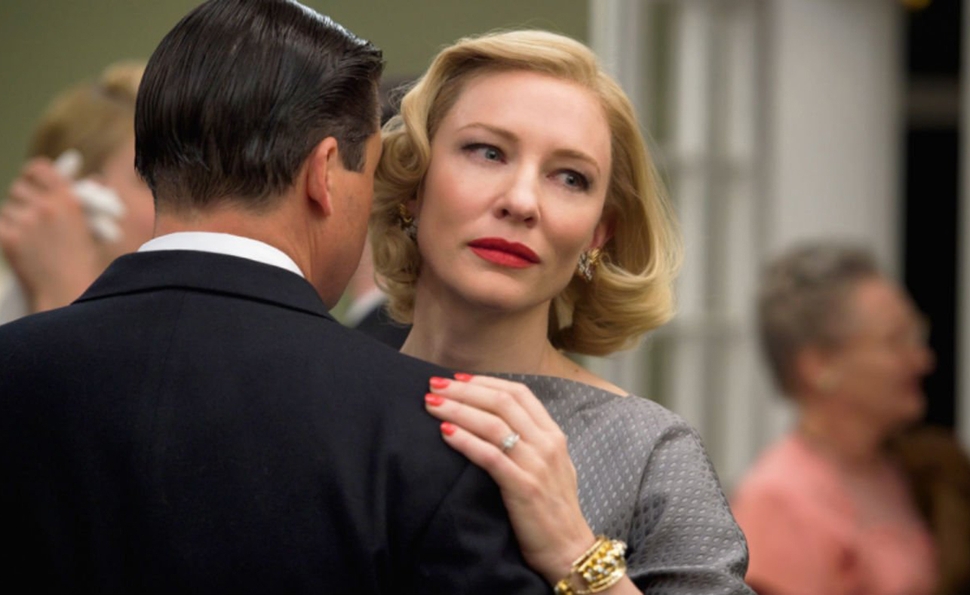 So far, Cannes 2015 has been a smorgasbord of grotesquerie (Tale Of Tales), dystopian absurdism (The Lobster), infidelity (In The Shadow Of Women), murder (Irrational Man, One Floor Below), and death (Son Of Saul, My Mother, The Sea Of Trees). Where, one might justifiably ask, is the romance? Might two characters fall in love without having to worry about being turned into animals should the relationship not work out? Do the current titans of world cinema have no heart?

As it happens, the three films I’ve seen over the past 24 hours are all romances of a sort, each one radically different from the others. In descending order of preference:

Unlike most of my peers, I wasn’t blown away by Todd Haynes’ feature-length Douglas Sirk homage, Far From Heaven. It’s a very good film, and certainly catnip for cinephiles, but Haynes’ postmodern appropriation of Sirk’s style is a bit too self-conscious for my taste. By contrast, there’s not a trace of winking or archness to be found in Carol, Haynes’ superb adaptation of Patricia Highsmith’s novel The Price Of Salt. Set in 1952—the year the book was published, under the pseudonym Claire Morgan—this unsentimental yet passionate love story sees a young woman named Therese (Rooney Mara) seduced by the older and more experienced Carol (Cate Blanchett) after a chance meeting at the department store where Therese works. Actually, the seduction takes a good long while, partly because Therese had previously self-identified as straight (despite having no desire to sleep with her boyfriend, played by Jake Lacy) and partly because Carol is still in the process of negotiating a divorce from angry husband Harge (Kyle Chandler). When Harge attempts to win sole custody of their child by attacking Carol’s moral fiber, solely on the basis of her affairs with women, Carol decides to temporarily flee New York with Therese in tow, unaware of the lengths Harge will go to in order to ruin any chance of happiness for her.

From its opening shot—an abstract pattern revealed as a sidewalk grate, from which the camera tilts up to take in midtown Manhattan at night—Carol creates a vivid retro look that’s entirely distinct from the Technicolor lushness of Far From Heaven, as well as from the drab claustrophobia of Haynes’ Mildred Pierce miniseries. (All three projects share the same great cinematographer, Ed Lachman.) This visual style, in concert with Carter Burwell’s plangent score, does much of the emotional heavy lifting, allowing Mara and Blanchett to strategically underplay their characters’ ardor; it’s been a long time since the movies have seen a romantic fuse burn quite this slowly and steadily. And I don’t know whether to credit Haynes, screenwriter Phyllis Nagy, or the actors with the numerous subtle grace notes that prevent Carol from coming across like a “problem picture,” even though that’s essentially what it is. There are some impassioned speeches in the film, but they’re far less eloquent than the moment in which Carol, having invited Therese to her house for the first time, hears Harge unexpectedly come in the front door and rushes to put on her shoes. (Both women are otherwise fully dressed and haven’t so much as touched.) That detail alone says 1952 in a way that feels organic rather than ironic.

Arnaud Desplechin’s My Golden Days, on the other hand, recalls a more recent past, just before mainstream adoption of the Internet put an end to long-distance relationships conducted primarily via snail mail. Having heard that the film is both prequel and sequel to Desplechin’s My Sex Life…Or How I Got Into An Argument (1996), I made a point of rewatching that three-hour epic during a long layover in Istanbul on my way here. It wasn’t really necessary, though, as Desplechin has written a completely new story involving several of the characters from My Sex Life, not worrying much about continuity. Mathieu Amalric once again plays Paul Dedalus—now middle-aged and headed back to France after years working abroad—but he gets relatively little screen time, appearing primarily in bookend sequences. Most of My Golden Days consists of an extended flashback to the late ’80s and early ’90s, when Paul (now played by charismatic newcomer Quentin Dolmaire) first embarked upon his tempestuous love affair with Esther, who was embodied by Emmanuelle Devos in My Sex Life but is now seen only as a teenager (Lou Roy-Lecollinet). Neither Dolmaire nor Roy-Lecollinet looks much like his/her older counterpart, but Paul’s witty self-deprecation is a constant—he talks his way into a college course by suggesting that the other students need a doofus like him to whom they can feel superior—and Esther is still maddeningly mercurial. Desplechin depicts their years together as a series of gorgeous fragments, employing his usual arsenal of meta-cinematic gimmicks (split screen, silent-era irises, characters reciting letters directly to the camera) to convey the sense that everything shown is being freshly remembered. The film’s French title translates as Three Memories Of My Youth, which better captures its ephemeral charms, even as Paul and Esther are increasingly forced to profess their love on paper, via correspondence that can be (and is, in this case) retained for decades afterward. I’m pretty sure My Golden Days works just fine as a stand-alone work; for those familiar with My Sex Life, however, it’s a bit as if Before Sunrise had been made 20 years after Before Midnight, using entirely different actors.

Mon Roi (My King), the sophomore feature by actress Maïwenn (Polisse), spends an exhausting two hours and 10 minutes exploring the entire course of its central relationship, from the meet-cute to the divorce. That’s not a spoiler, since the film begins at the end, with Marie-Antoinette (Emmanuelle Bercot, who also directed the film that opened the festival, Standing Tall), known to friends as “Tony,” tearing up one of her knees in a skiing accident that a shrink implies was caused by her lingering anger. The rest of Mon Roi alternates between Tony’s lengthy physical therapy, which symbolizes her emotional rehabilitation, and extended flashbacks to her time with Georgio (Vincent Cassel), a wealthy playboy who cheerfully proclaims himself not just a jerk but “the king of jerks.” He’s not kidding, and while Bercot and Cassel have a lot of fun with the early courtship scenes, the film’s second half is one long, ugly downward spiral, as Giorgio pays way too much attention to an unstable ex, moves into his own apartment down the block (expressly to get away from Tony when they’re fighting), allows the furniture to get repossessed, and otherwise behaves like a irredeemable man-child. Tony responds with screaming fits in public, and the movie turns into a drag; it’s a real problem when pouty Louis Garrel, who plays Tony’s brother, serves as the comic relief. (That said, he’s actually better at comedy than he is at pouting.) After four films, Maïwenn appears to have some talent behind the camera, but she hasn’t yet learned how to modulate tone. She appears to side with Giorgio, who, when Tony says she’s weary of constant highs and lows and just wants something calm and steady, points out that, on an electriocardiogram, highs and lows signify life, whereas a steady flatline means that you’re dead.

Tomorrow: Norwegian filmmaker Joachim Trier (Oslo, August 31st) makes his English-language with Louder Than Bombs, starring Gabriel Byrne, Isabelle Huppert, and Jesse Eisenberg. And maybe I’ll find the strength to write something about Journey To The Shore, the most boring film Kiyoshi Kurosawa has ever made.