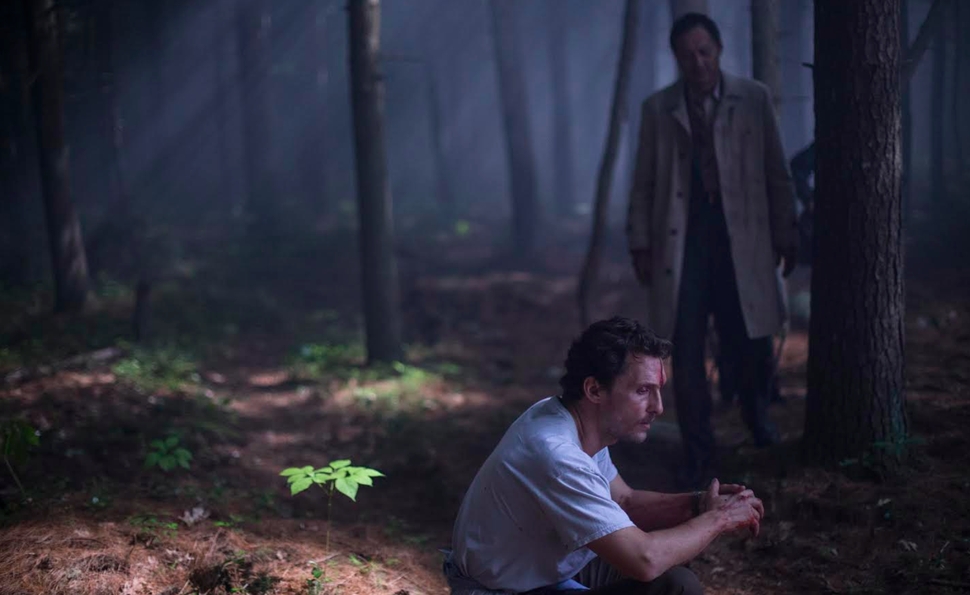 Day 3: Mr. Boobird on my shoulder

Every year at Cannes, at least one Competition title gets booed, inspiring a round of handwringing once word gets out. Personally, I never boo—but, then, I almost never applaud, either, unless I know that the cast and crew is present. After all, the closing credits don’t particularly care what I think. Hearing the lusty boos that erupted at the end of Gus Van Sant’s The Sea Of Trees, however, I finally understood the communal nature of this admittedly obnoxious ritual. Mediocre films are met with the silence of indifference, but people feel the need to acknowledge a memorably awful experience with something more like an ovation. Booing is a way for the audience to collectively confirm, among themselves, in the heat of the moment, that they’ve just witnessed a disasterpiece.

Not so much “from the director of the Palme d’Or-winning Elephant” (or even “from the director of that really ill-advised Psycho remake”) as it is “from the writer of ATM,” The Sea Of Trees stars Matthew McConaughey as Arthur Brennan, a science teacher who, as the movie begins, embarks on what is clearly a one-way trip to Japan. His intentions are obvious even to those viewers unfamiliar with the real-life location where he ends up: Aokigahara, a large forest at the base of Mount Fuji where so many people commit suicide annually that the government has erected signs begging visitors to reconsider. There wouldn’t be much of a movie if Arthur just offed himself, however, so no sooner has he picked a spot for his demise than he encounters a Japanese salaryman, Takumi Nakamara (Ken Watanabe), who’s changed his mind about dying and is desperately trying to find his way out. The rest of the movie alternates present-tense scenes of Arthur struggling to keep Takumi alive—gradually regaining his own will to live in the process, as the rules of dramaturgy demand—with flashbacks to Arthur’s troubled marriage to Joan (Naomi Watts), revealing the tragic series of events that made him decide to end it all.

It’s not impossible that a worthwhile movie could have been made from that scenario, maudlin and predictable though it is. And Van Sant, shooting mostly in Massachusetts (Japan wasn’t about to let a film crew into Aokigahara, which is a national embarrassment), generates some creepy atmosphere early on, as Arthur wanders around the forest finding the corpses of his recent predecessors. It’s Chris Sparling’s wretched screenplay (a 2013 Black List selection, incredibly) that makes The Sea Of Trees a fiasco for the ages. For a long time, the film is merely tiresome, shifting wearily back and forth between Arthur and Joan’s petty bickering in the flashbacks and Arthur’s long-winded, monotonous monologues about regret in the present. (Neither McConaughey nor Watts can do anything with their thinly conceived characters, while Watanabe is little more than a human sounding board.) The pain and hilarity arrive in earnest during the last half hour, as Sparling first engineers one of the cheapest bits of dramatic irony in cinema history, then follows it up with a sublimely idiotic twist that combines the dopiest instincts of M. Night Shyamalan and Nicholas Sparks. The Sea Of Trees has already been picked up by Lionsgate/Roadside Attractions, so I’ll leave The Reveal to whoever winds up reviewing it in commercial release…but I must confess that I feel some affection for this misbegotten picture. It’s so damn dumb, and so blissfully ignorant of its stupidity, that it becomes almost perversely touching.

Woody Allen, like A Fish Called Wanda’s Otto, doesn’t want anybody calling him stupid. The lightly diverting Irrational Man, playing out of Competition, stars Joaquin Phoenix as a philosophy professor at a fictional Eastern college, and it’s one of those Allen pictures in which the dialogue amounts to endless variations on “I’m well aware of what Kierkegaard said.” (It’s also one of those Allen pictures in which contemporary young women coo things like “I love making love with you.”) Initially, the story looks like another icky May-December romance, as Phoenix’s renowned skirt chaser, Abe Lucas, fends off the advances of an unhappily married fellow prof (Parker Posey) and a wide-eyed student (Emma Stone), clearly preferring the company of the latter. Turns out Abe is impotent, however, and when he gets his mojo back by plotting to murder an allegedly corrupt judge—based entirely on an overheard conversation in a diner—it becomes clear that Irrational Man is a comic variation on the Crime And Punishment narrative that Allen introduced in Crimes And Misdemeanors and then recycled in Match Point and Cassandra’s Dream. Once this plot kicks in (following about 45 minutes of laborious setup), the film is a lot of fun, as Abe carefully works out the perfect crime and then struggles to deflect the suspicions of both of the women in his life. Allen’s dialogue may have lost much of its zing as he’s gotten older—there isn’t a line here as good as the one he improvised during his press conference, when he answered a moronic question about whether he’s ever thought of murdering someone with “Even as you speak”—but his skill at casually planting elements that will pay off later hasn’t diminished in the slightest. (The climactic one here is arguably even better than Match Point’s errant ring.) As much a trifle as last year’s Magic In The Moonlight (also starring Stone), Irrational Man opens in July, and it’s ideal turn-off-your-brain summer fare, in spite of all the Kant and Heidegger references. Nice try, Woody.

Once considered the Italian Woody Allen, Nanni Moretti (Caro Diario, The Son’s Room) returns to Cannes this year with My Mother, which is either a cutting satire about the filmmaking process or an oneiric portrait of a film director’s emotional turmoil as she (Margherita Buy) tends to her dying mom (Giulia Lazzarini). I say “either” rather than “both” because Moretti, who also plays a supporting role as the director’s brother, never finds a way to integrate the two tonally—half the film is a broad comedy, the other half a sober dreamscape. The comedic half works considerably better, thanks in large part to John Turturro’s self-mocking performance as an Italian-American movie star (hilariously named Barry Huggins) who pretends to speak Italian more fluently than he actually does and brags—not even humblebrags, just plain brags—about having been fired by Stanley Kubrick. Turturro goes way over the top, as he often does, but his brash energy is a welcome counterpart to the morose melodrama surrounding the dying matriarch, which Moretti conveys via an incoherent jumble of fantasy, flashbacks, blatant symbolism, and (arriving at one point from nowhere, never to be heard again) voiceover narration. Tsai Ming-liang can pull off the expressionistic use of a flooded apartment to signify grief; Moretti, not so much. For every maudlin sequence like that, however, there’s a shot of Barry Huggins trying in vain to peer past the camera rig covering the windshield of the car he’s driving. Or just someone saying the words “Barry Huggins” in a thick Italian accent.

Tomorrow: My most anticipated film of the festival, Todd Haynes’ Carol, starring Cate Blanchett. (As Carol, I presume? Would have thought Anna Paquin was playing Margaret in Margaret, so you never know.) Also, assuming I make it in time—I need to dash down the Croisette as soon as I finish typing this sentence; it’s gonna be tight—I’ll be checking on Paul Dedalus (Mathieu Amalric) in Arnaud Desplechin’s sequel/prequel to his 1996 breakthrough My Sex Life…Or How I Got Into An Argument.