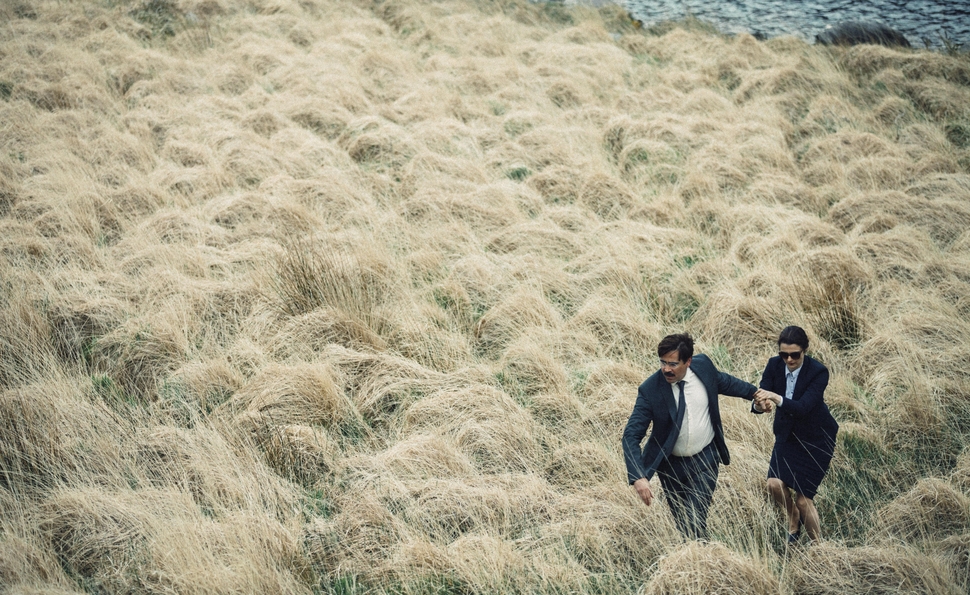 Festival reports are merely first impressions. In a sense, that’s equally true of film reviews in general; posterity, much more than this week’s Metacritic average, will ultimately decide what’s truly lasting. But it’s particularly the case at Cannes, where the pressure to instantaneously formulate coherent thoughts about challenging, difficult films has been amplified by digital publishing. (When I first started coming here, 13 years ago, I wrote nothing at all during the festival itself. Everything could wait for a wrap piece when I got home. Unthinkable now.) Already, two fascinatingly cryptic pictures have screened this year, and while I liked both of them fairly well, it’s entirely possible that my estimation will grow once I’ve had a chance to think further about what each is trying to say. Second viewings may well be required.

I’m already eager for another look at The Lobster, the latest absurdist whatsit from Greece’s Yorgos Lanthimos (whose third feature, Dogtooth, was the best film I saw at Cannes 2009). “Is there an actual literal lobster in it?” I asked my roommate, Blake, a couple of days ago. (He’d read the synopsis, I deliberately hadn’t.) “Answering that would probably tell you more than you want to know,” he replied. As it turns out, though, the film’s bizarre premise, which involves the possibility that protagonist David (an overweight Colin Farrell) may be surgically transformed into a lobster—is something of a red herring. In a dystopian near-future, single people are considered unfit to live as humans; once a relationship ends, the uncoupled get 45 days to find new partners, with those who fail getting turned into the animals of their choice. Most become cats or dogs, but David fancies being a lobster, because they live a long time and he likes the sea. Singles can extend their mate-seeking windows beyond 45 days by hunting down Loners—single rebels fighting their repressive society from the woods—with tranquilizer guns.

Lanthimos and his regular co-writer, Efthymis Filippou, mine some sharply black humor from the animal-fate concept, but they could replace it with euthanasia without materially changing the movie. What’s central here—and not fully clear to me, at least a few hours after seeing it—is the film’s allegorical take on romance and its societal codification. If I squint hard, I guess I can see (speaking as a currently single person) how some folks might feel like people who aren’t in long-term relationships are treated like second-class citizens. But there isn’t a lot of real-world resonance in The Lobster’s notion that we pair off with those who share our “defining characteristic,” exaggerated here as a dictum that, for example, someone who suffers from nosebleeds must find someone else who suffers from nosebleeds. Most characters apart from David are named for their must-match attribute: Rachel Weisz plays The Short-Sighted Woman, John C. Reilly plays The Lisping Man, etc. What about opposites attracting? Or the more scholarly notion that people seek out mates with complementary attributes? And when David eventually joins the Loners (led by Léa Seydoux), their own strictly enforced rules against sex, romance, and even flirting make even less allegorical sense. Personally, I wanted an entire movie about David feigning heartlessness in order to get paired with The Heartless Woman (Dogtooth’s Angeliki Papoulia), a desperate move he makes as he runs out of time. That felt familiar to me. I am 47 years old. 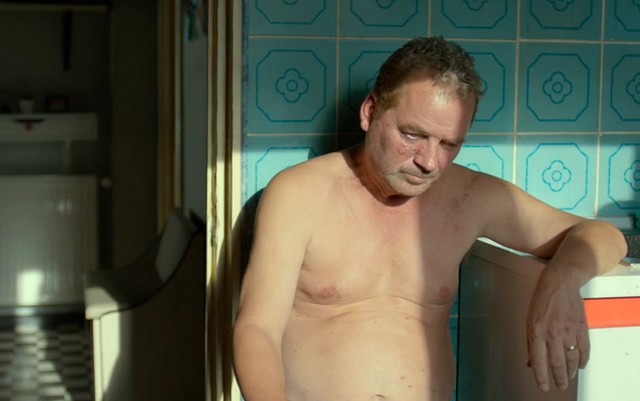 Confounding in an entirely different way is Radu Muntean’s One Floor Below, the Romanian director’s first narrative feature since Tuesday, After Christmas, which screened here to considerable acclaim back in 2010. One Floor Below is easy enough to synopsize: A middle-aged husband and father named Sandu (Teodor Corban), who runs some sort of business involving automobile registrations, comes back home one morning after taking his dog for a walk, and overhears his downstairs neighbor, Laura (never seen), loudly fighting with someone. Deliberately eavesdropping, he’s standing right by the door when the noise abruptly ceases and another neighbor, Vali (Iulian Postelnicu), exits her apartment. The next day, Laura is found dead; it’s fairly obvious Vali must have killed her, and that Vali knows Sandu knows. Sandu doesn’t call the police, however—he lies to them, in fact, when they show up to ask some standard questions—and when Vali pulls Sandu aside and says he urgently needs to speak with him, it turns out he wants help transferring the title on his car. Or so he claims, and he does provide the paperwork.

Tuesday, After Christmas featured characters who weren’t bashful about speaking their minds, openly and heatedly. One Floor Below, by contrast, features an equally inscrutable protagonist and antagonist, neither of whom have readily comprehensible motives. The film has less in common with Muntean’s previous work than it does with Aurora, the three-hour anti-thriller made by his countryman, Cristi Puiu; both depict a series of mundane, even banal incidents (there’s a lot of registration minutiae in this movie) that accrue tension from an unnervingly static camera style and the audience’s constant awareness that violence could erupt at any moment. Imagine a Romanian Rear Window in which the Jimmy Stewart figure has zero desire to see justice served, and the Raymond Burr figure evidently yearns to get caught. Just when I thought I had One Floor Below figured out, however, it ended on a baffling note involving Sandu’s teenage son, who sleepwalks while muttering what sounds like random gibberish. Muntean surely had a reason for making that the film’s final impression, but I’m damned if I know yet what it is. 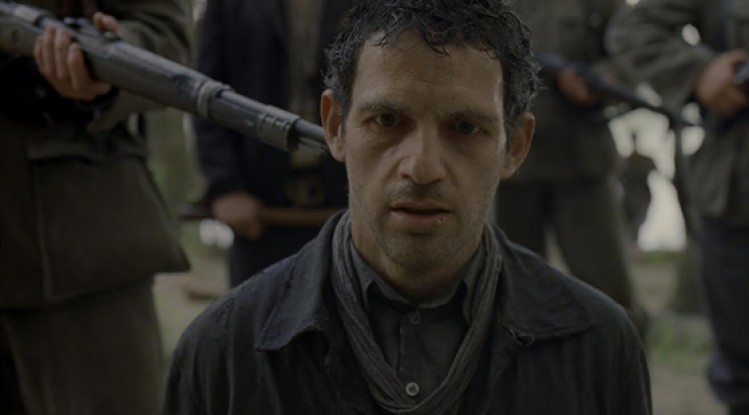 Thankfully, I’m on more solid analytical ground with Son Of Saul, the only directorial debut in this year’s Competition lineup. Early word was ecstatic, and the film’s stupendous opening sequence lives up to any and all praise: Without preamble, director Laszlo Nemes (another protégé of Béla Tarr) thrusts the audience into Auschwitz II-Birkenau, following one Sonderkommando, Saul (Géza Röhrig), as he herds fellow Jewish prisoners into the gas chambers and disposes of their bodies afterward. Depicting the Final Solution onscreen has long been considered obscene, but Nemes has devised a visual strategy that honors the unimaginable. Shooting in the squarish Academy ratio with a handheld camera, he sticks tight to Saul’s face at all times, with the horror surrounding him out of focus and barely glimpsed. There’s nothing exciting or entertaining about the chaos—it’s sheer hell, as close as any filmmaker has ever come to suggesting the nonstop nightmare experienced by the Sonderkommandos, who got to live a few months longer than ordinary camp victims, but were eventually gassed themselves.

Fairly quickly, it becomes clear that Son Of Saul takes place during the 24 hours or so leading up to the Sonderkommando revolt that took place at Auschwitz on October 7, 1944. (The film also imagines the circumstances that produced the only known photographs of death-camp victims, though the actual photos were taken two months earlier, in August 1944.) That would be ample drama, to put it mildly, so I can’t fathom why Nemes, who also co-wrote the screenplay, felt the need to “make it personal” by having Saul see his own illegitimate son initially, miraculously survive being gassed, only to be swiftly killed by a Nazi officer. Subsequently, the driving force behind the narrative becomes Saul’s desperate efforts to find a rabbi who can properly bury the boy, even at the risk of scuttling the impending revolt. In another context, the question of whether this behavior constitutes selfishness or heroism might well be compelling. Here, thousands of people are being murdered just beyond the lens’ focal length, and the moral dilemma of a single individual feels almost irrelevant. It’s as if Saving Private Ryan, rather than being a brutal, sensorial replication of what it was like to land on Normandy Beach on D-Day, had chosen to concoct some maudlin story about Tom Hanks and his platoon searching for the son of one grieving mother, and telling him to “earn this.” We would have been deprived of the greatest war movie ever made.

Yesterday: A triple helping of WTF.

Tomorrow: The McConaughaissance continues, hopefully, in Gus Van Sant’s The Sea Of Trees. Plus, Woody Allen made a movie this year! (Incredible, I know.) And so did the Italian Woody Allen, Nanni Moretti.