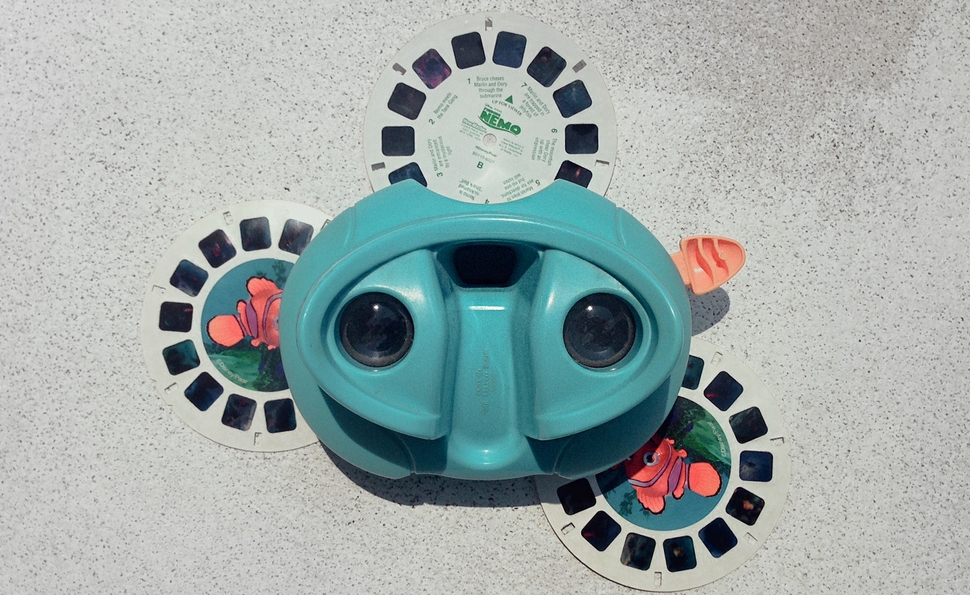 When Pixar met the View-Master

Finding Nemo came out in 2003, before the current 3-D boom, and yet the movie feels 3-D. I remember seeing Finding Nemo for the first time on a decent-sized multiplex screen on opening weekend, and having the sensation of sitting inside an aquarium. The eerie quality of light filtered through water, the popping neon colors of the fish, and the particulate-rich undersea environment makes Finding Nemo as much a place as a movie.

Like a handful of other Pixar films, Finding Nemo was later post-converted into 3-D, and re-released in that format in 2012. And like a lot of 3-D movies, the post-converted Finding Nemo raises a question that Hollywood hasn’t satisfactorily been able to answer over the last decade: What is the purpose of 3-D? Is it meant to replicate how viewers actually experience the world, or is it meant to make the fantastic feel more vivid—like the visual equivalent of a roller-coaster ride? When 3-D returned to cinemas a decade ago, I expected to see more movies in which all kinds of objects were thrust or flung at the audience, making hundreds of people flinch in unison. Instead, most filmmakers seem content to use 3-D to give an image just a little more depth—similar to what Finding Nemo was able to accomplish originally in 2-D. In most modern movies, 3-D is primarily an immersive experience, not a sensational one.

But immersion isn’t a bad goal. After all, when done right, 3-D movies can be almost as enjoyable as peering into a View-Master. 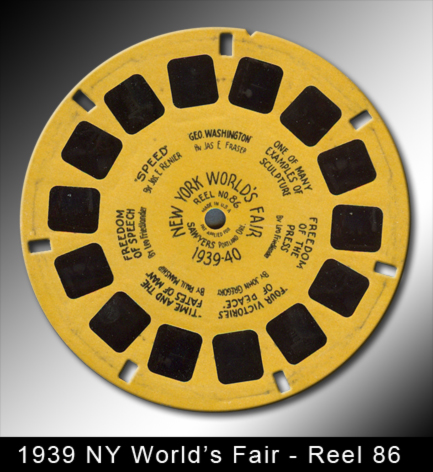 Introduced in 1939 at the New York World’s Fair by a photo-finishing and postcard-manufacturing company called Sawyer’s, the View-Master was originally intended as an upgrade to the stereoscopic postcards that had been popular in tourist traps and novelty shops for decades. Most stereographs featured cards mounted on sliders in front of a set of binoculars, which only let users look at one 3-D image at a time—and that only after a bit of fine-tuning. The View-Master put pictures on a paper disc that could hold seven images, to be viewed through a fixed-focus viewer, with a lever that allowed users to progress through the pictures one at a time. The first View-Master reels mostly contained color images of tourist destinations and natural wonders, but eventually, the device was rebranded more as a toy, with reels based on movies and cartoons. With seven pictures per reel, and three reels per pack, the View-Master became another medium for telling stories—like a stripped-down picture book, but with spectacular pictures.

The View-Master was maybe my favorite toy when I was a kid. (At the least, I got more use out of it than might be expected for a contraption with such limited functionality.) I never had any of the fancier View-Masters, like the ones that talked, or the ones that projected pictures onto a wall. My viewer was of the sturdy, plastic, handheld variety, and hard to ruin. I kept my viewer and my reels in the original Peanuts-branded cylindrical can that the viewer came in. My favorite reels were those Peanuts ones, which each contained what amounted to one Sunday comic strip, rendered with painted figurines, in 3-D so vivid that it was almost spooky. I could stare for hours at Snoopy’s Sopwith Camel, or Schroeder’s closet of Beethoven busts, or Linus’ ostentatious house of cards. I was especially drawn to the darker slides, which showed an object being destroyed, or a deep shadow. I was looking at a place I didn’t want to visit, and imagining what might happen there. 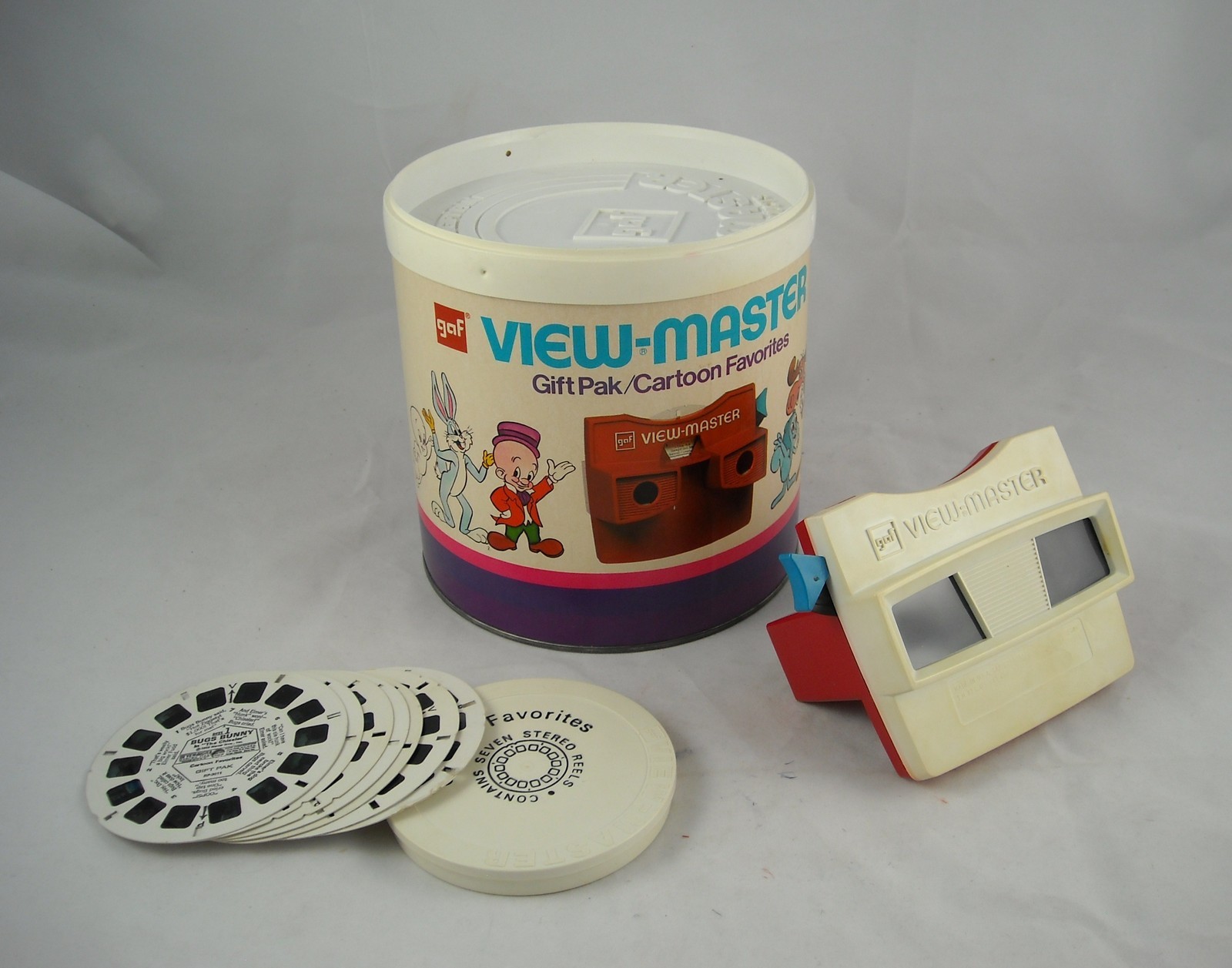 Like a lot of ancillary products for children’s movies—like Colorforms, or the Fisher Price movie viewer, or trading cards—View-Master reels for recent films aren’t as hot a property as they once were, because kids who want to revisit their favorites can just pop in a DVD, or watch the movie on their parents’ phones. In fact, I was a little surprised when I found out that not only do Finding Nemo View-Master reels exist, but that Pixar/Disney licensed a special Finding Nemo View-Master viewer, which works the same as the classic kind, but sports tropical colors and a fishbowl-like translucent plastic front to allow light in. 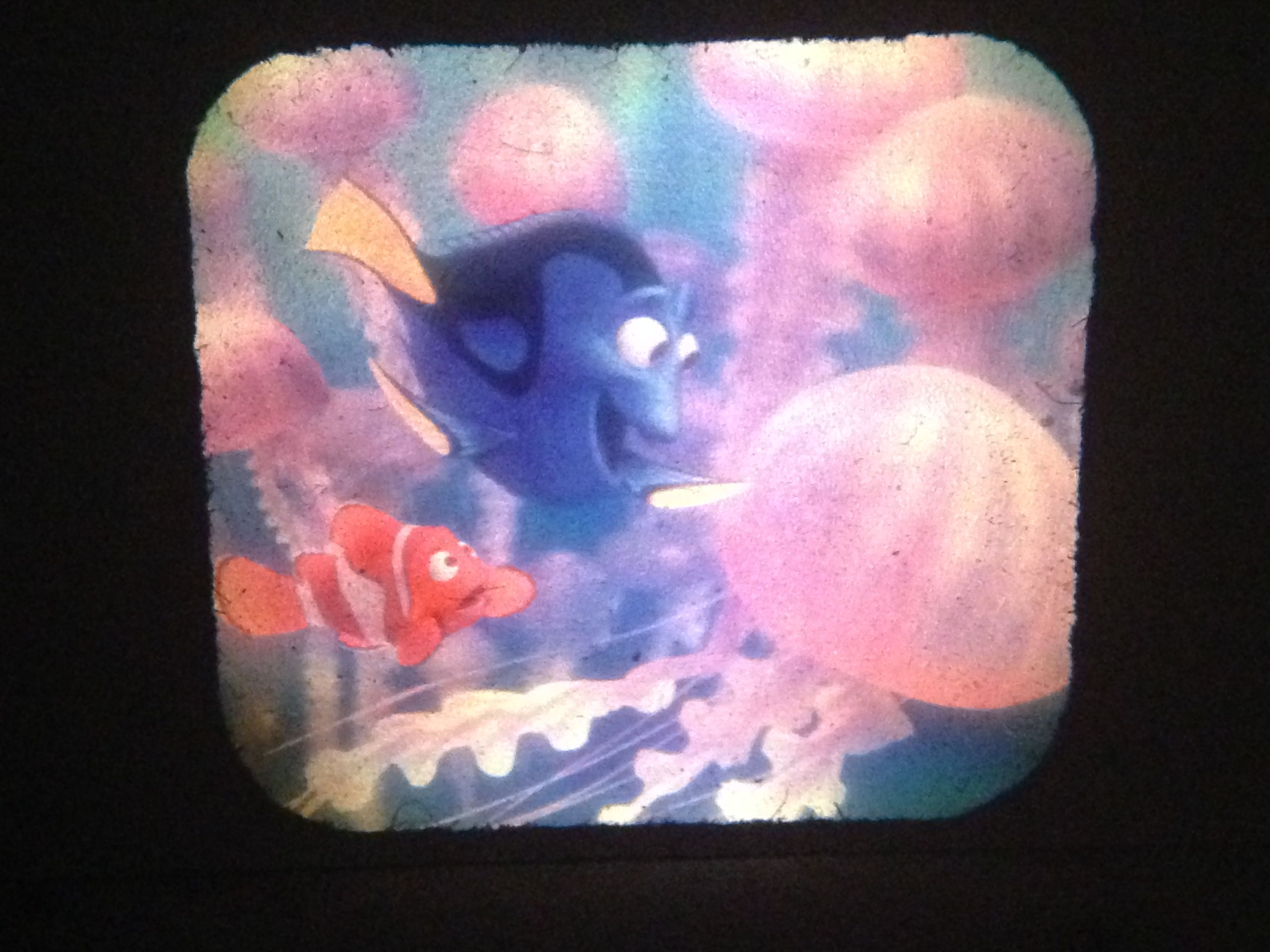 Finding Nemo is the perfect movie for the View-Master treatment, since so much of its visual impact derives from the kind of visual scale that a stereographic viewer reproduces well. Finding Nemo also sports a simple, primal story, easily reduced to 21 pictures. A widowed clownfish named Marlin (voiced by Albert Brooks) sees his only son Nemo (Alexander Gould) taken away by a dentist/fish-enthusiast, and so with help of a forgetful fish named Dory (Ellen DeGeneres), Marlin swims to Sydney, Australia to get Nemo back. Meanwhile, Nemo works with a grizzled fish named Gill (Willem Dafoe) to escape from the dentist’s fish tank before he’s given away to the dentist’s thoughtless niece. Finding Nemo is a rousing adventure story, which writer-director Andrew Stanton and his team weave together skillfully, cross-cutting between the two clownfishes’ various capers and narrow escapes. By the end, when the characters finally come back together, the movie has become a moving exploration of the bond between a father and a son, with the added emotional tug of Marlin’s relationship with the scattered Dory, and his growing understanding that he has to allow Nemo to become more independent. 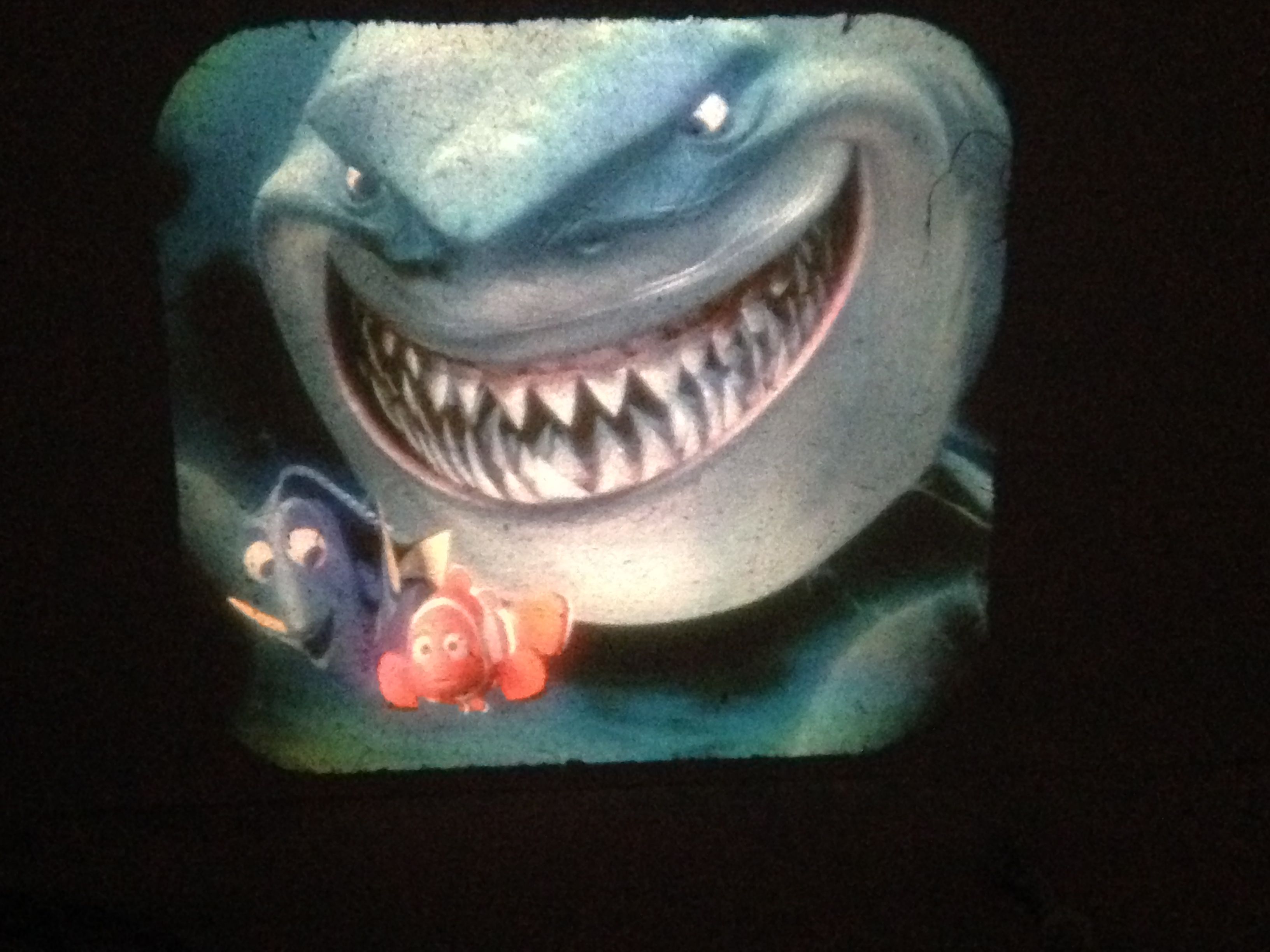 While the 3-D movie version of Finding Nemo is no significant upgrade on the original 2-D version, flat reproductions of the Finding Nemo View-Master reels don’t do the stereoscopic images justice. Take Reel A, Slide 5, for example: “Bruce urges Marlin and Dory to attend his party.” The picture is from the scene in the film where a great white shark (voiced by Barry Humphries) swims behind Marlin and Dory, before revealing that he and his pals have sworn off eating fish. The slide captures the moment before Bruce says he’s come in peace, so it shows Marlin and Dory, tiny and bright in the lower left-hand corner of the frame, while Bruce lurks behind them, grinning menacingly. Similarly, Reel A, Slide 6—“The submarine wreck holds a special surprise”—is unusually murky, with the submarine in the back of the frame, and a path of ominous floating mines leading up to it. These are the kinds of slides that kept me looking at my Peanuts View-Master reels so intently. The contrasts, the situations, and the diorama-like compositions all suggest an actual physical space that only the brave may enter. 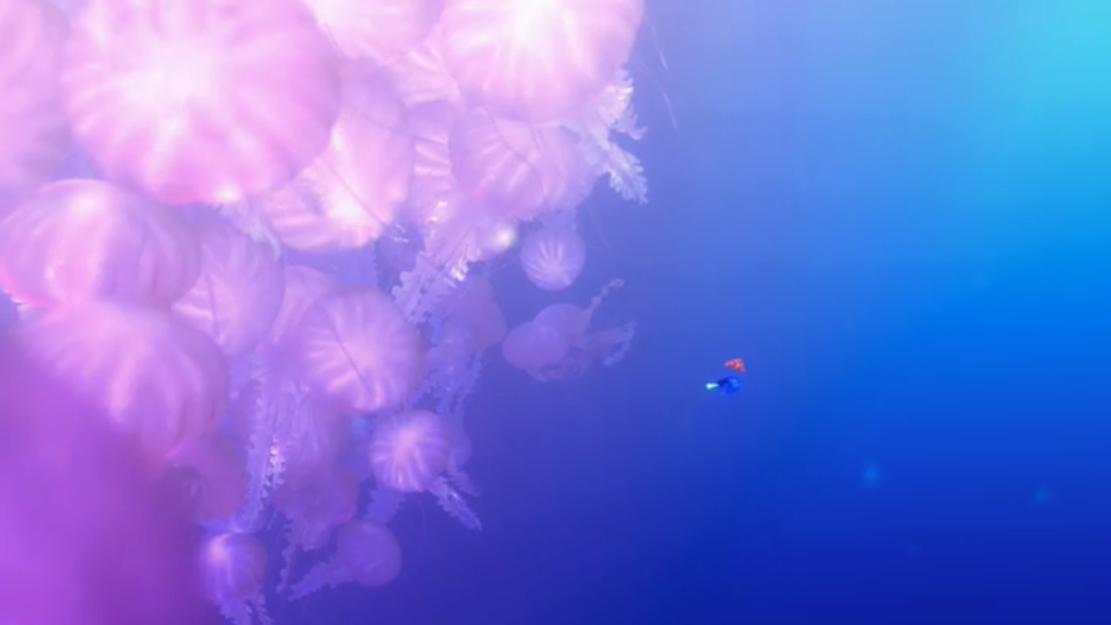 There are other terrific Finding Nemo View-Master slides, which both take advantage of this very old technology and honor what the state-of-the-art movie does well. Reel B, Slide 7— “Marlin and Dory are trapped in a forest of Jellyfish”—fills the frame with ethereally beautiful pink jellyfish, as deadly as the mines in the earlier slide, and similar in shape. Reel C, Slide 5—“Sydney Harbor! They’re almost there!”—shows Marlin and Dory in the extreme foreground, peering out of water that gorgeously reflects the blue sky. And Reel C, Slide 7—“Nigel races toward the dentist’s office”—has Marlin and Dory being carried by a pelican (Geoffrey Rush) whose bill thrusts beyond the frame, in exactly the way I’ve always imagined “3-D” to be.

Yet as I said up top, the movie itself needs none of that gimmickry to create a three-dimensional effect. Stanton and his animators aren’t afraid to let the main characters be tiny, dwarfed by larger fish, by scuba divers, or by the ocean itself. Finding Nemo uses old-fashioned techniques to establish a sense of perspective: putting voices and other sounds at a distance to reinforce that they’re far away; using a first-person “camera” when Marlin and Dory are fleeing a predator; superimposing an image of the Sydney Harbor over a shot of Nemo trapped in a fish tank; and so on.

But it isn’t just the depth and quality of the image that makes Finding Nemo so absorbing. The movie opens with a traumatic scene, where Marlin and his wife Coral (Elizabeth Perkins) are attacked by a barracuda, and Marlin gets knocked out, only to find that Coral and all but one of their family of eggs has been eaten. That one scene is the whale, the ocean, and the scuba diver to the rest of the movie’s Nemo. It’s the big thing that gives all the little things a sense of scale. It’s the dark shadow that I keep staring at through the ViewMaster viewfinder, frightened and fascinated.