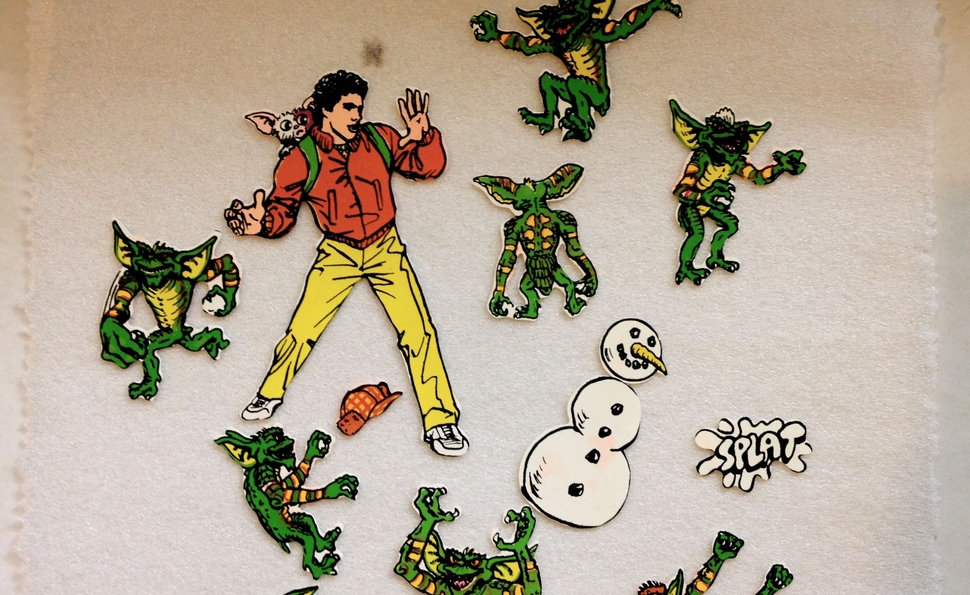 For my 8th birthday, I asked for the Kenner Star Wars Death Star Space Station: the one with the laser cannon, elevator, light bridge, and trash compactor. I didn’t get it, because my family wasn’t a Death Star Space Station kind of family. Back then, we couldn’t have afforded any toy with that much molded plastic. Instead, when I turned 8, I received a Star Trek Colorforms set. It was the wrong science-fiction franchise, and not even close to right toy. Yet I stubbornly played with those Colorforms for hours, sticking the crew of the Enterprise onto the bridge, and into the transporter pods, and making up little stories as I rearranged their positions across a smallish cardboard rectangle. After a while, I stopped being sullen whenever I broke out the Star Trek Colorforms. I had to admit: They were fun in their own way.

In the abstract, as a way to play, Colorforms had been around long before Harry and Patricia Kislevitz started manufacturing the first official Colorforms play-kits in 1951. Colorforms were pre-dated by paper dolls, which for centuries have allowed kids to mix and match outfits and poses on cut-out characters. They were also pre-dated by flannel boards, which Sunday School teachers around the world still use to retell Bible stories with colorful pieces of cut-out fabric stuck on fabric backgrounds. In toy-business terms, Colorforms were beaten to the market as well by Fuzzy-Felt, a U.K. brand with a similar concept, launched in 1950.

The actual origin story for Colorforms, though, is one of those great American “one idea begets another” tales, common to toys like Silly Putty (originally developed as a synthetic rubber) and Play-Doh (originally a wallpaper cleaner). As Patricia Kislevitz told the Associated Press back in 2001, Colorforms were born when she and her husband Harry were art students, experimenting with inexpensive new media. They started cutting up thin sheets of vinyl and slapping them onto the semi-gloss-painted wall in the bathroom of their bohemian New York City apartment. When they discovered that their friends were spending more time in their bathroom than their living room, the Kislevitzes knew they were onto something.

The original Colorforms kits were limited to geometric shapes, but the product became more detailed over the years; and after striking a deal in 1957 to make a “Popeye Cartoon Kit,” Colorforms soon became a go-to toy for media companies looking for no-brainer licensing deals. The appeal of Colorforms on both the consumer and manufacturing side has always been the same: They’re cheap to make, and cheap to buy.

Consider Gremlins, for example. A team assigned to design a stuffed Gizmo doll to tie in to the 1984 fantasy blockbuster would’ve had to deal with expensive molds and multiple materials, and would’ve charged customers accordingly. But a Gremlins Colorforms Adventure Set? That’s just a few sheets of colored vinyl in a cardboard box, with a painted, treated cardboard backdrop included. It’s affordable, on both sides of the counter. 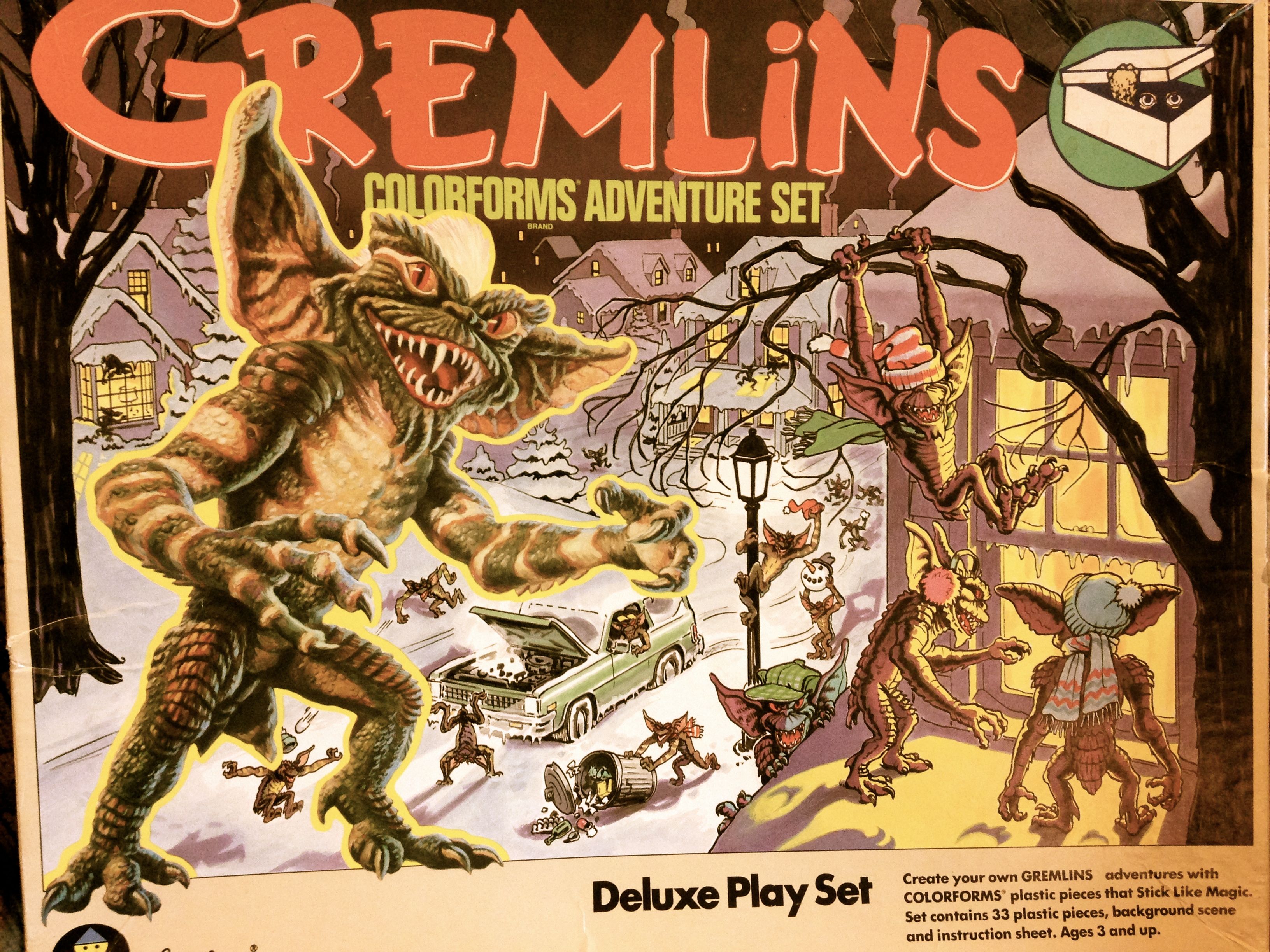 The bigger question is whether there should be such a thing as a Gremlins Colorforms Adventure Set, given that Colorforms are for kids, and Gremlins… Well, no one’s ever been able to nail down exactly who Gremlins is supposed to be for.

Written by a young Chris Columbus as a horror-comedy—sort of like a slapstick spin on Alien—Gremlins was toned down considerably after Steven Spielberg bought Columbus’ spec script to produce for his fledgling company, Amblin Entertainment. Spielberg and Amblin brought the project to Warner Bros., which gave the film “a blinking green light,” according to Gremlins director Joe Dante. The studio kept delaying the start date while the executives wrung their hands over questions of tone, ultimately trusting that Spielberg would deliver a marketable picture with merchandising potential. To that end, the Gremlins team scaled back a lot of the bloody mayhem in Columbus’ original draft. But even the blunted, PG-rated Gremlins was so violent and frightening that the movie (along with Spielberg’s similarly gory Indiana Jones And The Temple Of Doom) touched off a national debate over whether Hollywood needed to add a rating between PG and R.

On paper, Gremlins is pretty horrific. The movie begins with unsuccessful inventor/salesman Randall Peltzer (played by Hoyt Axton) buying his son Billy (Zach Galligan) a strange pet he finds in Chinatown: a cute, furry little mogwai that Rand names “Gizmo.” Rand gives Billy Gizmo as a Christmas present, then tells him the three key rules for mogwai: Keep them away from bright lights, don’t get them wet, and don’t feed them after midnight. But accidents happen, and eventually Gizmo does get wet, causing other mogwai to spontaneously spawn from his flesh. And eventually, those mogwai have a late-night snack, which causes them to transform from adorable furballs to scaly beasts that wreak havoc throughout Kingston Falls, the Peltzers’ small town. These “Gremlins” damage property, torment the citizenry, and—unusual for what’s ostensibly a family picture—kill.

But there’s the story, and there’s the telling. Columbus’ script always gave the material a comic twist, but Dante added his own sensibility, aiming to make a movie that would be “It’s A Wonderful Life meets The Birds.” On the Gremlins DVD commentary, Dante says the film was shot on a couple of different studio backlots, and that he made no effort to hide the phoniness of the sets. The houses and storefronts of Kingston Falls are recognizable from dozens of other movies and TV shows (on the commentary, Dante cites The Music Man, Rebel Without A Cause, The Dukes Of Hazzard, Back To The Future, Tarantula, and “a couple of Douglas Sirk pictures”), and Dante drops in recognizable pieces of pop culture throughout the film. Gremlins sports clips from Invasion Of The Body Snatchers and the classic Bell Labs educational short “Hemo The Magnificent,” and the sets are dressed with pictures of famous non-humans, such as Donkey Kong, Robby The Robot, Smokey Bear, and Woodsy Owl. By having the characters almost constantly watching movies and interacting with fictional characters, Dante establishes the reality of the Gremlins universe, where the fantastic and the mundane intermingle.

That’s one reason why the sometimes-crude special effects in Gremlins don’t look especially dated today: because everything in Gremlins looks cheap and antiquated. (One unfortunate exception is the synthesizer-heavy Jerry Goldsmith soundtrack, which feels more “1984” than anything else in Gremlins.) Dante’s effects team—following the lead of creature designer Chris Walas—mixed puppets, models, animatronics, stop-motion, and cel animation to bring the Mogwai and their Gremlin counterparts to life, without ever trying to make any of them look “realistic,” per se. Throughout his career, Dante has celebrated the ingenuity of B-movie-makers by working with people who come up with clever ways to concoct illusions, and then show the seams a little, so that the audience won’t miss the trick. That’s why Gremlins embraces the fake. The snow in Kingston Falls looks like instant-mashed-potato flakes, the creatures look like toys, and even Billy’s necktie is a clip-on.

On the commentary track, Dante says Warner Bros. didn’t have many complaints during the shoot, which produced dailies that looked a lot like what everyone had discussed in the planning stages. It was only after the first assembly that the studio began to balk. The executives thought the movie had too many Gremlins. (“Shall we cut them all out and call it People?” Spielberg reportedly replied.) And Dante was told that the film was still too violent, with too many wild swings from slapstick to scares.

Warner Bros. especially hated the scene in Gremlins where Billy’s love interest, Kate (Phoebe Cates), delivers a long monologue about how her father died while trying to crawl down the chimney to play Santa Claus. The studio bosses complained that they didn’t know whether to laugh or cry at the scene, and Spielberg told Dante that he didn’t really like the speech either, but that he’d back Dante’s decision on whether to keep it or cut it. Dante insisted that it had to stay in, because it embodied the theme of the picture—which has to do with the inevitability of entropy, and how in the world of this movie, everything breaks. So the scene stayed, and became one of the most memorable moments in a film that went became a substantial hit. For whatever reason, Gremlins connected with the public, even though Dante kept emphasizing failure, destruction, and decay, during an era of otherwise-pervasive American optimism.

Dante never had another hit as big as Gremlins, though—not even the superior Gremlins 2: The New Batch, which partially satirizes the original. He’s made many terrific films and TV episodes since, but Dante’s style isn’t for everyone. He lets movies be movies, foregrounding the idea that what’s on his screen are actors, playing characters, in front of sets.

That doesn’t mean Dante skimps on content. On the contrary, his movies are often funny, exciting, thematically rich, and even emotionally moving. But there’s a streak of defiant juvenilia to Dante. On the Gremlins commentary track, he talks about meeting animator Bob Clampett, whose 1943 Bugs Bunny short “Falling Hare” includes creatures called “gremlins,” and Dante sounds like an enthusiastic pre-adolescent when he says Clampett “showed us cartoons and stuff.” Meanwhile, Dante litters the film with in-jokes: a copy of The Four Magic Moves To Winning Golf (his golf-pro father’s best-selling instruction manual), a movie-theater marquee advertising A Boy’s Life and Watch The Skies (the working titles of Spielberg’s E.T. and Close Encounters Of The Third Kind, respectively), a news report on TV anchored by Lew Landers (a reporter character from Dante’s The Howling, played again by Jim McKrell), and so on. 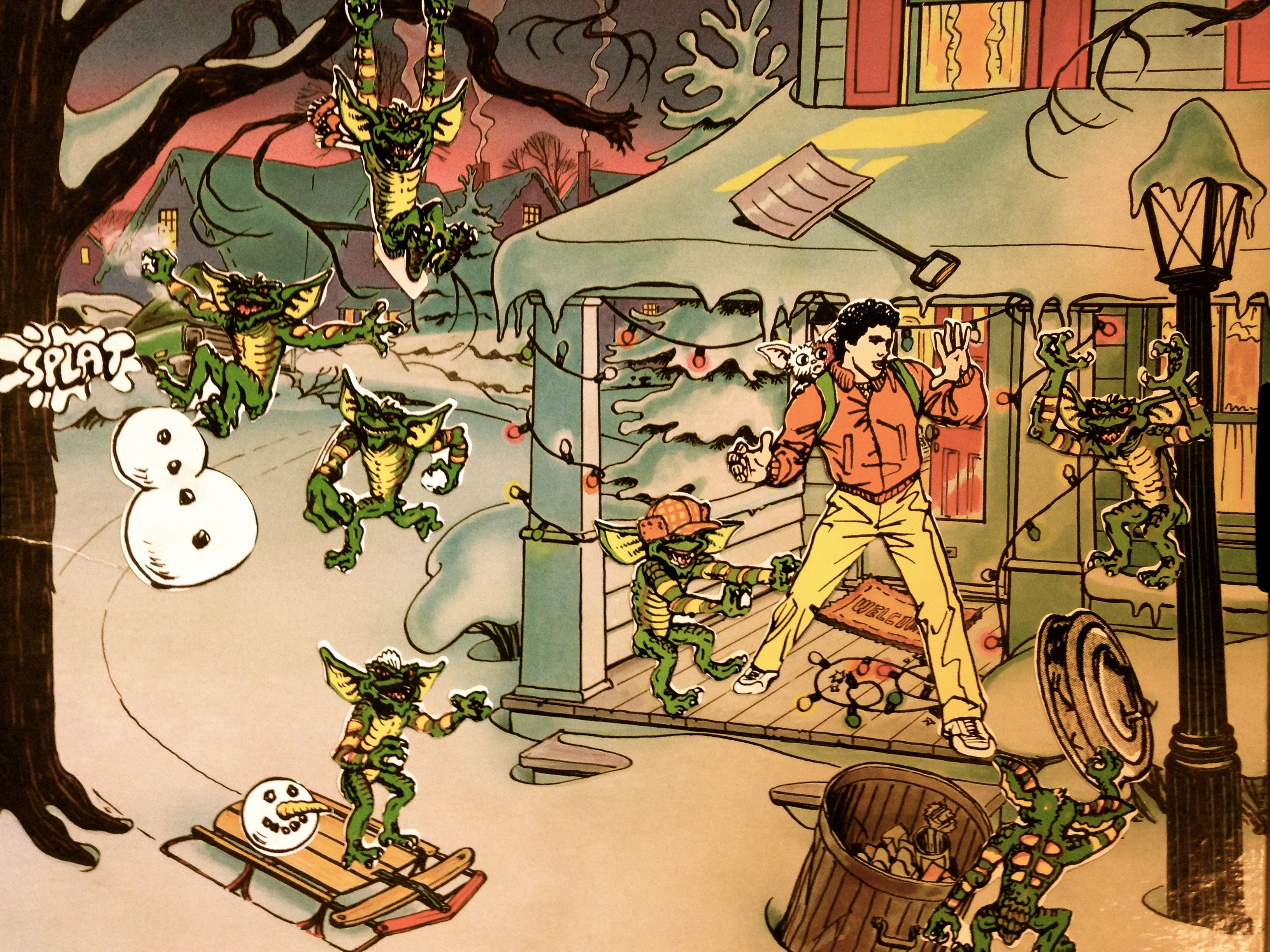 All of which is a way of saying that Joe Dante would be inclined to appreciate a Gremlins Colorforms Adventure Set—both because he’s the kind of nostalgist who’d think a retro toy was inherently cool, and because he’d actually enjoy playing with it. He couldn’t do any of his dutch-tilts or faux-dramatic push-ins with the Colorforms Gremlins, but I’m sure he’d have fun sticking Gremlins all over the tableau inside the box, arranging a little scenario where the monsters terrorize poor Billy and Gizmo, destroying the Peltzers’ homey small-town Christmas by ripping up decorations and knocking down a snowman. Also, having spent months wrangling intermittently functioning animatronic creatures during the Gremlins shoot, Dante would probably identify with the familiar Colorforms experience of getting everything stuck on just-so, and then having some pieces spontaneously loosen and fall off.

Playing with Colorforms is an exercise in overcoming those kinds of limitations. There’s no dimensionality to a Colorforms scene. Putting the plastic pieces onto the cardboard is like assembling a comic strip, not like making an animated cartoon. But over time, skilled Colorforms artists learn how to position the extra body parts and outfits to create an illusion of dynamism. And while the temptation with Colorforms is to fill the rectangle with every possible piece, over repeated plays, some understanding of composition develops, along with the ability to distinguish between a full-looking scene and mere clutter.

Mostly, Colorforms encourage a leap of imagination. Colorforms aren’t just floppy, ugly-looking decals; they’re also characters in any kind of epic that the owner can conceive. This isn’t the most immediately impressive toy. It’s an afterthought toy, picked up at the last minute, then handed over to children who either toss them aside, or learn what director Joe Dante knows: that in the right hands, flat will do.