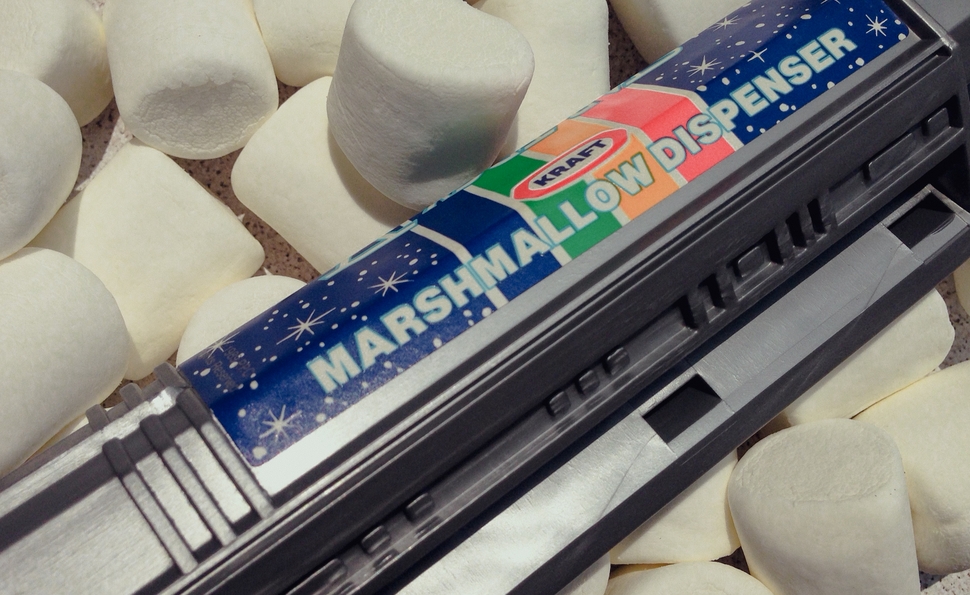 Twenty minutes into Star Trek V: The Final Frontier, three crew members of the Starship Enterprise—Captain James T. Kirk (William Shatner), his first officer Spock (Leonard Nimoy), and the ship’s doctor, Leonard “Bones” McCoy (DeForest Kelley)—are sitting around a campfire on Earth, in Yosemite National Park. This is essentially all they’ve been doing in the movie up to this point. Elsewhere in the universe, on “the planet of galactic peace,” Nimbus III, Spock’s half-brother Sybok is contriving a hostage situation to get the United Federation Of Planets to send a starship he can hijack and pilot to the legendary planet of Sha Ke Ree, at the center of the galaxy, beyond The Great Barrier. Periodically, Star Trek V cuts back to Nimbus III to track the progress of Sybok’s plot. But most of the film’s first 20 minutes is spent in Yosemite, with the Enterprise crew on shore leave—rock-climbing, hiking, and eating Bones’ special bourbon-laced beans. Twenty minutes. In a movie with a 106-minute running time.

In addition to being one of the most notorious scenes in the Star Trek franchise’s history, the campout in The Final Frontier—which ends with Kirk, Spock, and McCoy attempting to sing “Row Row Row Your Boat”—inspired one of the damnedest pieces of cross-promotion. Right before Kirk and company start to sing, bombed on bourbon-beans, Spock pulls out a futuristic device to dispense what he calls “marsh melons,” to be roasted over the fire, just as he’s seen in his computer records about camping. When Star Trek V came out, Kraft offered a plastic replica of Spock’s dispenser, for any Trekkie who mailed in a proof-of-purchase from a bag of Jet-Puffed marshmallows.

What’s there to say about the Star Trek V: The Final Frontier Kraft Marshmallow Dispenser? It’s a cheap piece of crap, for one thing—which likely won’t surprise anyone. It comes with a little loop attachment, on which hangs an utterly useless plastic fork and a spoon that could neither roast nor convey a marshmallow. The center of the dispenser is a hollow tube, big enough to hold three marshmallows, which can then be slid up the tube, Pez-style, via a spring-loaded lever. But the lever only slides halfway, which means that while the first two marshmallows pop out relatively neatly, the third has to be flung at whomever might want it.

Let’s be honest, though: The point of the Star Trek V: The Final Frontier Kraft Marshmallow Dispenser isn’t to dispense marshmallows. It’s a collectible, made at the time for people obsessed with the ephemera of their favorite science-fiction franchise—and bought today off auction sites by people who think said ephemera is hilariously dumb. The dispenser was undoubtedly the result of someone in Paramount Pictures’ product-placement division thinking, “There are so few brand names in the Star Trek universe. How can we make some extra money from this film? Call Kraft!” 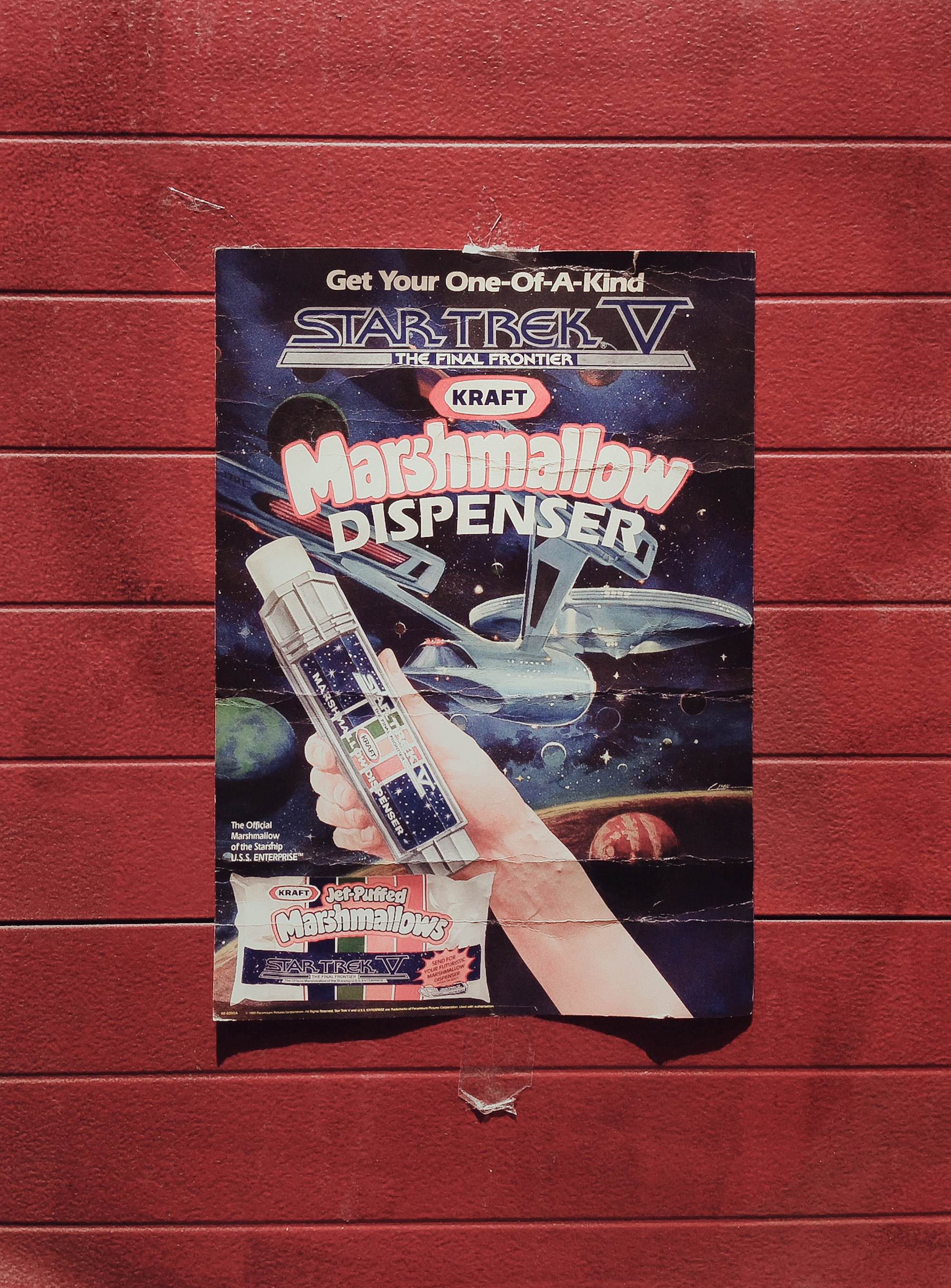 But there’s something else about the Star Trek V: The Final Frontier Kraft Marshmallow Dispenser—something so obvious that it either has to be intentional, or it’s an unconscious steal from a pervasive piece of popular culture. The dispenser looks like a Star Wars lightsaber. It’s an unlit lightsaber, sure, but any kid (or grown-up) holding this device could easily imagine a laser-blade jutting out of it, making that crackling “wom-wom” sound familiar to Star Wars fans.

Star Trek the TV series predated the first Star Wars movie by a full decade, which means Star Trek beat Star Wars to the punch on ways to spin merchandise off from science-fiction adventures. Star Trek had the toys, the books, and the read-along records long before Star Wars. But Star Wars had more of all of it, and better models. By the time Star Trek: The Motion Picture came along in 1979—green-lit in large part because the culture had been gripped by Star Wars mania—the Star Trek franchise seemed to be in catch-up mode, both in terms of how to make space operas cinematic, and how sell ancillary goodies to fans.

The Star Trek fan base had always been different from fans of other fantasy TV shows and movies: more dedicated, and more philosophical. (Not, in other words, inclined to buy toy ray-guns.) Star Trek: The Motion Picture tried to honor the TV show’s braininess while taking advantage of the advances in special-effects technology that 2001: A Space Odyssey had introduced while Star Trek was still on the air, and that Star Wars then made commonplace. The result was a film that was both expensive and inert—though profitable enough that Paramount commissioned a sequel, at roughly one-fourth the budget of its predecessor.

Star Trek II: The Wrath Of Khan, released in 1982, made less money worldwide than Star Trek: The Motion Picture, but was more warmly received, because it wasn’t trying to be Star Wars, or 2001. The second Star Trek movie understood one of the big reasons why the three modestly rated seasons of the original TV series had become favorites in syndication. Beyond the thoughtful plotting and the refusal to succumb to camp, Star Trek episodes had great replay value because the cast of characters are pleasant to be around, in ways that even the cast of Star Wars isn’t. The crew of the Enterprise has a believable camaraderie, cut with just enough friction to bring some dimensionality to their relationships. They’re the kind of folks a fan could imagine sharing a marsh melon with.

So this is how we ended up with Star Trek V: due to the overconfidence of the movie’s writers and producers that Star Trek fans feel enough affection toward these characters to want to spend 20 minutes watching them loaf around Yosemite, singing “Row Row Row Your Boat.”

Star Trek V: The Final Frontier was directed by Shatner, who also came up with the basic story of a Vulcan’s quest for God, beyond a literal “final frontier.” By contract, Shatner had to be offered the opportunity to direct a Star Trek movie because Nimoy had directed Star Trek III and Star Trek IV. But even Shatner later admitted he was in over his head, blaming a budget crunch and a writers’ strike for keeping him from realizing his cosmic vision for the film.

Shatner may have had a point on the budget. Star Trek V reportedly cost more than any of the previous three films, but it was still a relatively lean production, with the producers cutting costs by ditching Industrial Light And Magic as the special-effects team, going instead with a company called Associates And Ferren. The resulting effects are absolutely awful—as though motion-picture technology had suddenly regressed to 1966. During Kirk’s fall from a Yosemite cliff, the green-screen is laughably obvious. The jet-boots Spock uses a couple of times in the film make it look as though someone is bobbing a cardboard cutout of Leonard Nimoy in front of the camera. But it isn’t just the flashy visual effects like laser-bolts and warp-jumps that look cheap in The Final Frontier. Even something as simple as Kirk pushing a button so he can sit on a bench that slides out of the wall—or Scotty breaking out of a cell by blowing a suspiciously clean hole in the door—comes across like the kind of prop-building and practical effects of a community theater. (Or like something fans could order by mail from the good people at Kraft.)

Effects have never really been what Star Trek is about, any more than it’s been about marshmallow dispensers. The core of the Star Trek franchise has always been the characters, and when the movies or TV series get them right, it’s easier to forgive a lot of other lapses. (The two entries in the recently rebooted Star Trek film series both feature characters who are so much fun to be around that only in retrospect is it apparent that the films themselves don’t make a lot of sense.) But in Star Trek V: The Final Frontier, the cart drives the horse to an absurd degree. What happens in this movie is what happens in a lot of TV shows that run on too long: The actors and creators coast on shtick. In the case of The Final Frontier, that means a lot of scenes of Kirk, Spock, and McCoy acting like cute, bickering old-timers.

In fact, Star Trek V’s plot depends on the characters not changing. One way Sybok bends people to his will is by mind-melding with them and getting them to confront and overcome any bad memories that they’ve carried with them for most of their lives. Kirk, though, refuses to play along, saying, “I need my pain,” and adding that everybody needs some baggage to make them who they are. This goes along with what Kirk says at the start of the film, when he sighs that career Federation types aren’t meant to have lives and families apart from of their colleagues. This whole movie is like a meta-commentary on what the creators think Star Trek fans want from Star Trek. Don’t go beyond the barrier at the heart of the galaxy, crew of the Enterprise. Bones, stay xenophobic. Spock, stay aloof. Kirk, stay hotheaded. Enterprise, keep breaking down.

So in a way, it makes sense that one of the few remaining souvenirs of maybe the least-beloved of the Star Trek films is a pointless, barely functioning prop from a a scene that cynically reduces the entire franchise to its three most popular characters just sitting around, demanding to be adored for existing. The Star Trek V: The Final Frontier Kraft Marshmallow Dispenser is a physical manifestation of what Bones says to Spock after their disastrous attempt at a campfire singalong: “It’s a song, you green-blooded Vulcan. You sing it. The words aren’t important.”