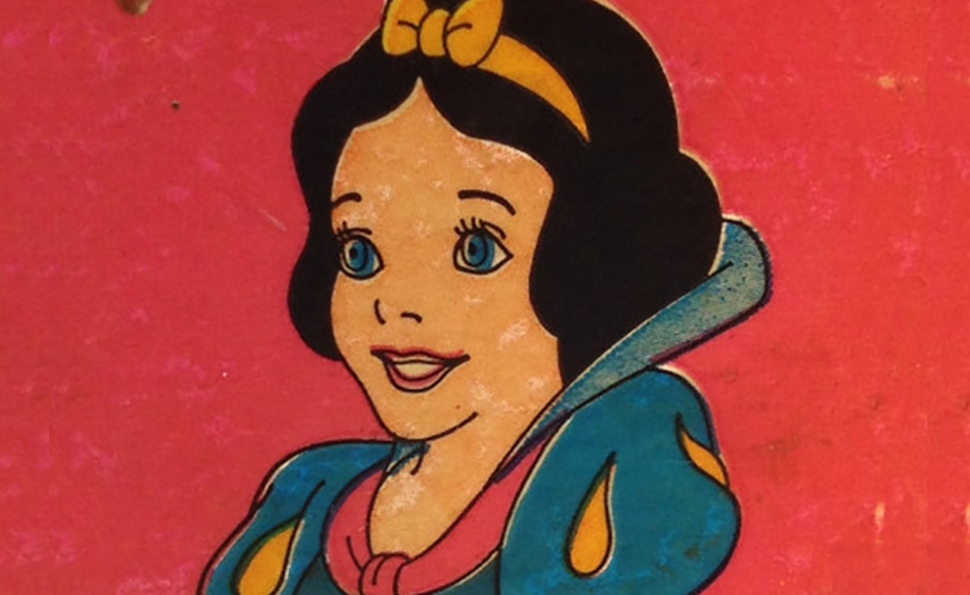 As a businessman, Walt Disney tended to think like an animator: Each move facilitated another move, and each technical innovation was a step down the road to something else. Disney usually made the broader decisions himself, then had a team of grunts playing in-betweener, filling in the details. Throughout the late 1920s and early 1930s, Disney spent the money he made from Mickey Mouse on upgrades to his studio that some found needlessly risky. He added sound to cartoons, then color, then images shot with a multiplane camera. But it was all in service of his biggest gamble: spending years and millions making Disney Studios’ first animated feature, Snow White And The Seven Dwarfs.

The gamble paid off. Snow White was one of the biggest hits of the 1930s, winning a special Academy Award (or, more accurately, seven small Oscars and one regular-sized one) for technical achievement. The film played around the world, inspiring animators and live-action filmmakers alike. In The New York Times’ original 1938 review, Frank Nugent raved, “It is a classic, as important cinematically as The Birth Of A Nation or the birth of Mickey Mouse. Nothing quite like it has been done before; and already we have grown impolite enough to clamor for an encore. Another helping, please!” Disney suffered some setbacks after Snow White—movies that didn’t connect right away, labor strife, projects that drained resources for years before coming to fruition—but he and his team always had the Snow White experience to fall back on, as proof that a thousand small steps could take them a long way.

And after all that toil, 40 years later, Snow White became a movie that kids could hold in their hands, and watch by turning a crank.

Long before DVD and Blu-ray—long before VHS and Beta—film buffs did watch movies at home, and not just the ones that were broadcast on television. Families, schools, churches, and small local film societies would get their hands on projectors, and either rent or buy prints to screen. Sometimes these were full 16mm prints of feature films. But some companies also sold Super 8 excerpts from classic Hollywood titles, highlighting battle scenes, comedy routines, musical numbers, and the like. (And if there were kids in the audience, inevitably the program would end with some half-drunk dad or hip priest running the film backward, and sending the youngsters into hysterics.) There was something sublime about those old Super 8 films. When held up to the light, they looked like tiny, indistinguishable pieces of stained glass. When run through a projector, those images moved, and could be made to move at different speeds and in different directions by grown-ups.

The Fisher Price Movie Viewer was introduced in 1973, and gave children the power to control Super 8 film clips. It’s an ingenious device, the FPMV. Shaped like a ray-gun—and undoubtedly played with as such by children whose parents spurned war toys—the Viewer features a viewfinder, a focus-knob, a hand-crank, a slot to insert film cartridges, and an opening to allow in natural light, so that the toy doesn’t need bulbs or batteries. (In 1978, Fisher Price expanded the line by adding an electronic theater, with a light-up screen and a projector function.) In the 1970s and 1980s, the Fisher Price Movie Viewer was one of those toys that nearly every kid had lying around the playroom, because it wasn’t that expensive, save for the cost of buying new cartridges to watch. Fisher Price had licensing agreements with the likes of Disney, Warner Bros., MGM, and the Children’s Television Workshop, so the Viewer could show Pink Panther cartoons or Sesame Street segments—or a few minutes of Snow White. But most families didn’t bother buying that many cartridges, which is why the cartoon that most adults of a certain age have seen more than any other is probably Disney’s “Lonesome Ghosts,” the Fisher Price Movie Viewer’s starter cartridge. (Call it the Duck Hunt of the FPMV.)

The appeal of the Fisher Price Movie Viewer extends beyond just watching a couple of Snow White scenes over and over. As was the case with those old Super 8 parties, the operator of the FPMV had the freedom to crank the film backward and watch the dwarves march in reverse, backing away from their cottage and toward the mine. And unlike with a traditional Super 8 film—which would melt if left stationary in front of a hot bulb—Movie Viewer viewers could examine the Snow White cartridge one frame at a time, and control the brightness by aiming the toy toward a lamp or the sun.

As an aside: some enterprising cinephiles commandeered the FPMV tech and modified cartridges to show their own films, which they then manufactured and traded with other collectors. Something similar happened with Fisher Price’s PixelVision toy video camera in the 1990s, which became a low-priced way for some experimental filmmakers to shoot and show their work. I couldn’t find any examples of these homemade FPMV films online, and perhaps it’s just a rumor that there ever was an extensive trading network for these items. If there was, presumably it was used by many to distribute pornography—but I really didn’t want to find out what would happen if I Googled “Fisher Price porn.” 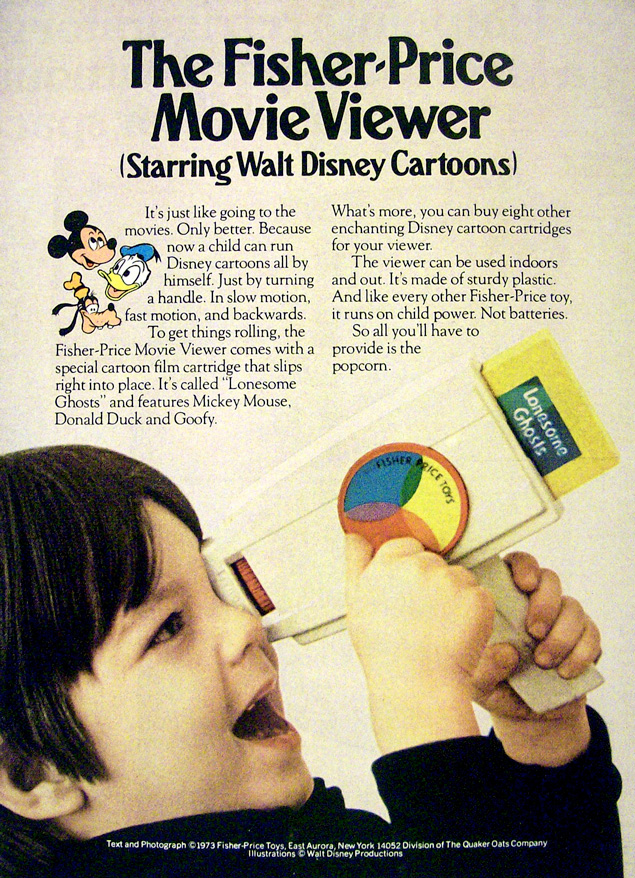 The experience of Snow White via Movie Viewer is eerie. The cartridge only strings together a few scenes, none of which are especially dramatic. The dwarves heigh-ho home from work to find that their new houseguest has fixed them supper, and dancing ensues. That’s about it. And unlike in a real animated film, there are substantial gaps in the animation, such that anyone who slows the film down or advances it a frame at a time—which everyone who plays with this toy does—will see the action rendered in a far choppier manner than on the big screen.

But given that Snow White originated in the era of “the old, weird Disney,” the lack of substance and incompleteness of this filmlet suits it. Disney cartoons from the 1930s feel like they were broadcast directly from the collective dreaming mind of the Depression, with their rich paint and wrinkly menace. Unlike their brethren at Warner Bros., Disney animators largely eschewed japery and pop-culture winking, preferring to tap into children’s fantasy lives with its soft contours and sudden jabs. As seen through the Movie Viewer, this old world looks even more distant, populated by ever-shifting blobs who vary in intensity depending on the light source.

What would Walt Disney have made of his work being converted into cheap plastic? Given how open he was to sticking Mickey Mouse ears on anything that would fit onto a department-store shelf, he’d have probably been delighted. Besides, while in private, Disney had a reputation as something of a hard-ass, his much warmer public persona was born in part of his appearances on television as the host of Disneyland (later called The Wonderful World Of Disney), where he walked children through all the steps that went into making a Disney cartoon. The Fisher Price Movie Viewer is one of Disney’s TV lectures in action. The Disney animators worked so hard on these films that it would be wrong to say anyone could do it. But the principles that made Snow White are the same that govern a flip-book: Put pen to paper. Draw one picture after another. Expect magic.