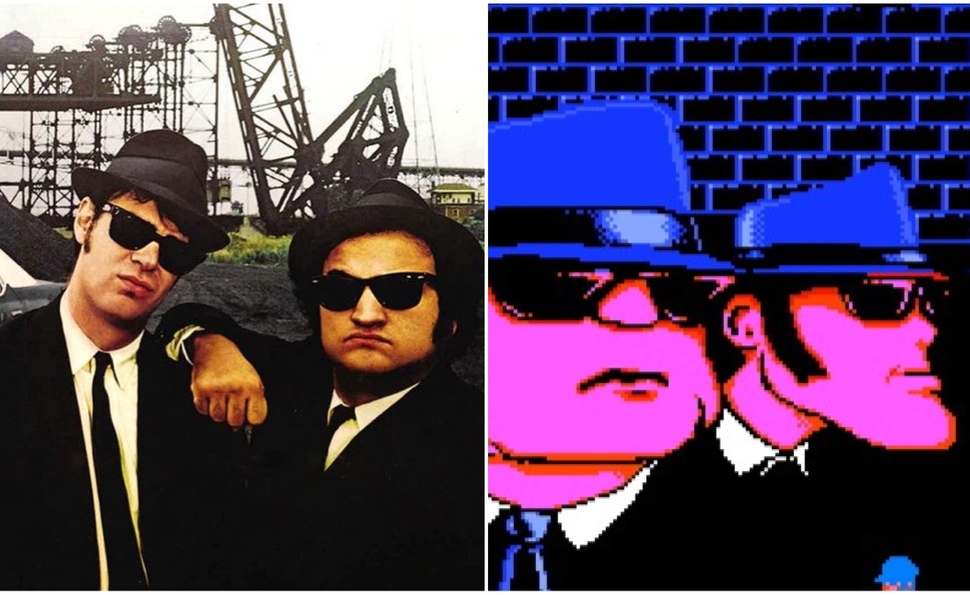 I could be Joliet Jake. Or I could be Elwood. At the start of the Blues Brothers videogame, I get to choose. (Though the game defaults to Elwood, which is nuts.) Once I choose my Blues, I walk along city streets as a blocky little guy with limited motion, collecting vinyl records as though they were Super Mario Brothers coins, while avoiding cops by hopping onto conveyer belts and dumbwaiters. I can move up to higher levels by grabbing onto helium balloons—y’know, like The Blues Brothers do. Throughout the game, the music replicates the songs from The Blues Brothers, the movie: “Peter Gunn Theme” and “Everybody Needs Somebody To Love,” rendered in tinny electronic tones.

When the real Blues Brothers were born, computer games barely existed. During the first season of Saturday Night Live—in 1975 and 1976—cast-members John Belushi and Dan Aykroyd would indulge their passion for rhythm and blues music by hanging out with the show’s band, often to the band’s chagrin. Then one Saturday night, SNL musical director Howard Shore and his sidemen backed Aykroyd and Belushi as they belted out a groovy version of the old blues standard “I’m A King Bee” while dressed as their popular recurring “bumblebee” characters. Two years later, Aykroyd and Belushi revived and revised their bluesmen, stepping onto the stage in suits, sunglasses, and porkpie hats, and standing stock-still until the band hit the right beat, at which point they flailed about ecstatically, transported by the music. The crowd ate it up, in the studio and at home.

The Blues Brothers made great television, and were popular enough that Aykroyd and Belushi convinced SNL’s next musical director, Paul Shaffer, to put together a full-time band, drawing on venerable studio musicians and R&B legends like Steve Cropper and Donald “Duck” Dunn. The Blues Brothers started playing shows, and while opening for Steve Martin at Los Angeles’ Universal Amphitheater, they recorded a live album, Briefcase Full Of Blues, from which they released a cover version of the Sam & Dave classic “Soul Man” that became a Top 15 single. The album went on to sell more than 2 million copies.

The inevitable Blues Brothers movie wasn’t as successful—at least not initially. In Tom Shales and James Andrew Miller’s book Live From New York: An Uncensored History Of Saturday Night Live and Doug Hill and Jeff Weingrad’s Saturday Night: A Backstage History Of Saturday Night Live, the making of The Blues Brothers movie is framed as the end of an era, marking the moment when the initial burst of popularity for SNL hit a wall. At the least, the movie marked the end of The Blues Brothers’ association with Shaffer, who was busy with an ill-fated Gilda Radner album and stage show when the movie was in production, and was summarily replaced by the much-less-entertaining Murphy Dunne. The movie also closed the curtain on Aykroyd and Belushi’s time with SNL, wrapping the stretch of the show many people consider its best. Because The Blues Brothers received middling reviews, and was a disappointment at the box office relative to its cost and expectations (although it was still one of the top 10 grossing pictures of 1980), its very existence became, to some, a monument to Aykroyd and Belushi’s hubris.

Honestly, The Blues Brothers is a pretty choppy ride, remembered fondly for its intermittent high points, and forgiven by fans for its logy pace and cut-rate Laurel-and-Hardy-isms. The plot is paltry, following Jake and Elwood’s efforts to reunite their band and make enough money to save the Catholic orphanage that raised them, all while being pursued by the various law-enforcement agencies and fringe groups they’ve angered during their “mission from God.” Aykroyd’s original script was a thick sheaf of pages filled with mythologizing details about the two Blues and how they learned to love music. (Some of that material made it into Mitch Glazer’s novelization; some can be found in the coffee-table book Blues Brothers: Private, by John Belushi’s wife Judy.) Director John Landis pared down Aykroyd’s excess and replaced it with his own, playing up the story’s action elements at the expense of its quirky comedy. The result is a film that has a hard time getting started, then piles on so many car chases and crashes—many of them admittedly awesome—that it wears out its welcome long before the closing credits.

Where The Blues Brothers consistently excels is in its musical sequences—which is ironic, given that Aykroyd and Belushi were frequently criticized for getting rich off of a tame, cartoonish version of black music. The Blues Brothers countered that criticism by giving screen time to R&B legends like James Brown, John Lee Hooker, Ray Charles, and Aretha Franklin, each of whom had been off the pop charts for a while, and were happy for the renewed exposure. (One exception to that gracious spirit was Cab Calloway, who according to Landis on the Blues Brothers DVD balked at having to do an old-fashioned version of his classic “Minnie The Moocher,” instead of the more contemporary, disco-fied take he would’ve preferred.) Landis has said he wanted to pepper The Blues Brothers with every type of movie musical number, from dancing in the streets to studio-bound fantasias to simple concert footage. In the process, his film charted the history of soul, from rural blues and church music to urban R&B and white-boy appropriation.

That appropriation is still nettlesome, though not because Aykroyd and Belushi were doing anything wrong by sharing their love of blues. As Aykroyd notes in the Blues Brothers DVD bonus features, he and Belushi were preaching the gospel of a classic American art form at a time when the radio was dominated by arena-rock and disco; and all they meant to do was have a good time, and remind people of the tradition of humor and joy in R&B. It wasn’t their fault that Briefcase Full Of Blues outsold nearly every actual blues album ever made, or that it established a trend of vintage music by black performers being repopularized in movies about white people. (See also: The Big Chill, The Commitments, etc.)

That said, it wasn’t too big a leap from the R-rated, counterculture-informed comedy The Blues Brothers to this:

The French software company that created the Blues Brothers videogame, Titus Interactive, never had the greatest reputation during its 20 years of existence (from 1985 to 2005). Between generic chess and racing games, Titus handled licensed properties like Superman, Dick Tracy, Xena: Warrior Princess, and RoboCop, delivering clunky variations on the usual, uninspired “platform” genre—the kind of games where characters jump and throw while moving across a scrolling screen. The Blues Brothers game actually had more legs than a lot of Titus titles, debuting in 1991 as a PC game, then spreading to Amiga, Commodore 64, Atari, NES, and the Game Boy. (I have the Game Boy version.) But it follows in the tradition of so many movies-turned-games, in that it cherry-picks elements from the original, then drops them into a format that in and of itself has nothing to do with the film.

The main problem with the Blues Brothers game is that at no point while playing it do I feel like a Blues Brother. I feel more like an ungainly version of Mario, in Blues Brothers clothes. Even at its most self-indulgent, the Blues Brothers movie carries its creators’ personality, from Belushi’s nods to his Chicago roots to Aykroyd’s random references to old TV shows and right-wing conspiracies. The videogame, on the other hand, doesn’t have any larger story. Just as The Blues Brothers themselves reduced a venerable musical art form to simplistic iconography, so The Blues Brothers videogame makes an icon of an icon, abstracting it to the point of nothingness. It’s a profound indignity that a project that originated on the hippest, most subversive show on American television would come to this—though to be fair, long before the Titus game, The Blues Brothers were being sold in bulk in shopping malls, on T-shirts, posters, buttons, and albums.

That downward spiral from well-meaning hobby to soulless sellout doesn’t dilute the purity of Aykroyd and Belushi’s original impulse, though. Much of the charm of the duo’s initial Saturday Night Live performances had to do with how eagerly Aykroyd and Belushi threw themselves into these roles, rather than holding back out of deference to their own limited musical skills. Belushi in particular brought a fearless can-do spirit to his music, knowing he was risking embarrassment by stepping outside of comedy, where he was one of the most popular and respected performers of his generation. That was the whole idea behind The Blues Brothers. It was an exercise in wholehearted fandom, never intended to be a stiff homage—or a stiffer electronic replication of a stiff homage. Originally, when Belushi bopped around to the music, he was acting out every amateur’s dream of pop stardom. His abandon was infectious, encouraging fans to watch and think, “I could be Joliet Jake.”