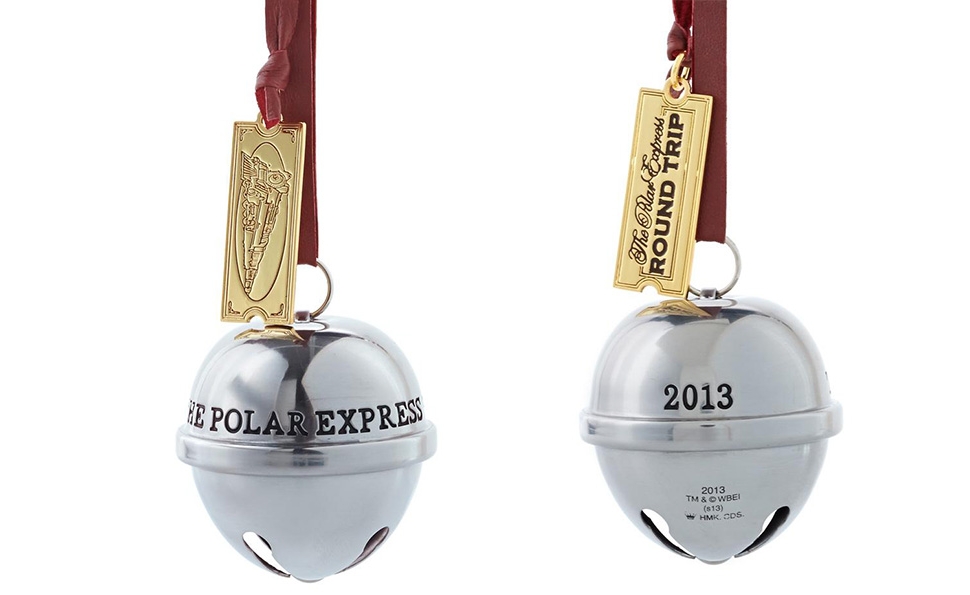 It’s A Wonderful Life didn’t become a staple of the Christmas season until the late 1970s and early 1980s, when a copyright-renewal error led to the movie being shown on television repeatedly by regional UHF stations. In 1965, CBS executives tried to change almost everything about the holiday TV special A Charlie Brown Christmas, because they were convinced—mistakenly, as it turned out—that the program’s choppy animation, amateur voice work, jazzy soundtrack, and overt Christian themes would all bomb with their target audience. A Christmas Story was only a modest hit when it came out in 1983, but soared in popularity when it began airing on cable a few years later. Canons are always in flux, and new traditions emerge all the time—especially when it comes to the holidays. We don’t always register the exact moment that just another piece of Christmas product becomes beloved.

For people of a certain age and sensibility, Robert Zemeckis’ 2004 animated feature The Polar Express is remembered—if at all—as a dud. Not commercially; the film started slow at the box office but finished its initial run as a solid hit. But the reviews for The Polar Express were decidedly mixed, with many expressing outright distaste for Zemeckis’ use of motion-capture in the animation process: wiring up live actors and then turning their movements into computer-rendered images. Zemeckis, an Oscar-winning director with a strong visual style, shackled himself to a form of filmmaking that’s neither fish nor fowl, coming up with something stiffer (and, for some, creepier) than either animation or live action. Then he stayed in that medium for his subsequent films Beowulf and A Christmas Carol, making an extended detour away from what had been an A-list career.

That’s The Polar Express that a lot of middle-aged critics and cinephiles know. People under age 20 know different. When my kids were in preschool and in the early grades of elementary school, they watched The Polar Express every December, while drinking hot cocoa, at end-of-semester classroom pajama parties. My wife teaches college freshmen who did the same when they were kids. Since 2004, the film has been regularly revived at IMAX 3-D theaters, has aired on TV to strong ratings, and has sold well on DVD and Blu-ray. And that’s not even taking into account the merchandising. The Chris Van Allsburg picture-book on which the movie is based continues to be displayed prominently in bookstores and toy stores around the Christmas season, surrounded by Polar Express figurines and toy trains and play-tickets. 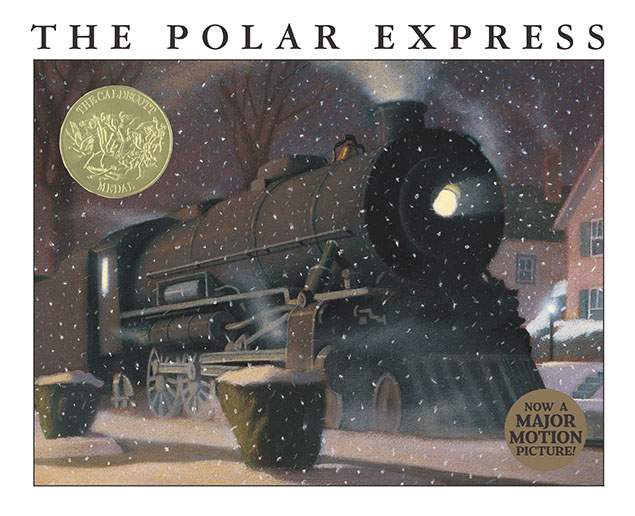 Hallmark has sold several different Polar Express “Keepsake Ornaments” over the past decade. This year’s model is “Santa’s Sleigh Bell,” and consists of a small bell on a red strap, with a miniature replica of a golden ticket attached. For those who don’t know the book or the movie, the bell is significant for a couple of reasons. The “Hero Boy” of the story is on the cusp of adolescence, and losing his belief in Santa Claus and the whole Christmas spirit—which is something he discovers about himself when he finds he can longer hear jingling Christmas bells. After accepting a ride on a train bound to the North Pole, the boy meets Santa Claus, who offers him a chance to receive the first gift of Christmas. Hero Boy asks for a bell that had shaken loose from one of Santa’s reindeer: a bell that he can hear, thus proving his renewed faith. The book and the movie both end with the same passage:

At one time, most of my friends could hear the bell, but as years passed, it fell silent for all of them. Even Sarah found one Christmas that she could no longer hear its sweet sound. Though I’ve grown old, the bell still rings for me, as it does for all who truly believe.

I like Hallmark ornaments. We have several on our tree: two Singin’ In The Rain ornaments, a Hank Aaron, an assortment of Island Of Misfit Toys toys, a miniature Superfriends lunchbox (with Joker thermos inside!), and more. I imagine that Christmas tree ornaments serve for most people as they do for us, as a sort of family history, preserving the handiwork of children, important dates (“Baby’s First Christmas,” “Our First Christmas Together”), summer vacations to places with gift shops, stocking-stuffers from distant relations, and and our own personal taste. The Polar Express sleigh bell ornament is well-crafted, as Hallmark ornaments tend to be. It’s big for a bell, with some heft to it, and the golden ticket is as long as the ornament it’s attached to (albeit much narrower and lighter). Because it’s just a bell, it’s likely to get lost among the rest of the generically Christmas-y items on a typical tree. 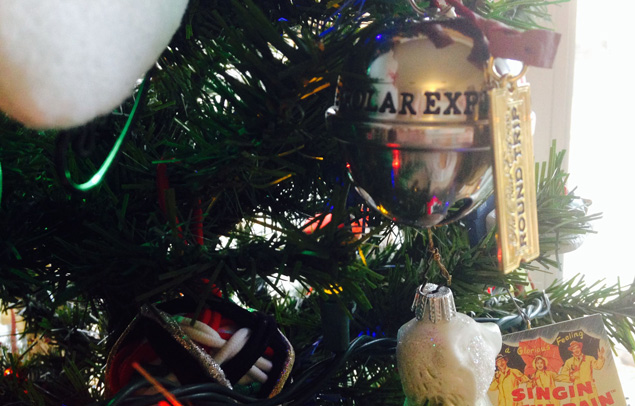 But that’s okay, because it’s really a meta-souvenir of the film. It stands in for the spirit of Christmas, and the bell-owner’s faith therein. That’s what these pop-culture-themed Keepsake Ornaments are meant to do: Take the appeal of a movie or TV show or book or what-have-you, and reduce it to a single three-dimensional image, true to its source. They don’t come across like cheap tchotchkes; they’re meant to express the owner’s real affection. The “Santa’s Sleigh Bell” ornament works just as well for fans of the book who aren’t big on the movie, because it’s a linchpin prop in both. It’s “the first gift of Christmas,” now in a form where it can be stuck on a tree well before Christmas Day.

But is that too literal? I ask this only because one of the main criticisms of the movie has been that Zemeckis and his star, Tom Hanks (who executive-produced the film), showed a lack of imagination in translating Van Allsburg’s book to film, trying so hard to replicate the look that they failed to capture the feel. On the Blu-ray special features, Zemeckis’ co-producer Steve Starkey boasts that the motion-capture process succeeds in “taking the pencil out of the hands of the animator and putting it into the hands of great actors.” This shows a fundamental lack of understanding of the animation medium. Animation—like all of the best representational artforms—offers an abstracted version of reality that conveys its essence. It’s not about a bunch of fussy hand-gestures and facial tics; it’s about paying enough attention to a character or object to get its innate qualities across in a few key brush-strokes and poses. For all the money spent on layering Van Allsburg’s painted art over the movements of live actors, the ordinary interactions in The Polar Express don’t really look any better than one of those cheap “motion comics” that takes original superhero art and then hinges all the limbs and mouths.

Where The Polar Express overcomes its self-imposed limitations is in its action sequences. Zemeckis’ primary gift as a filmmaker is his understanding of motion and scale. Think about the trip through the universe that opens Contact, or the way the camera zooms through the house in What Lies Beneath, or the floating feather in Forrest Gump, or Wilson the volleyball bobbing away from Tom Hanks in Cast Away, or the plane crash that opens Zemeckis’ most recent film, Flight (a belated return to live-action). Zemeckis brings that kind of kineticism to Polar Express when he has the train zooming over hills like a runaway roller-coaster, and then sliding, derailed, across a sheet of ice. And he brings that kind of awe when the Polar Express passengers arrive at Santa’s village, and roam through a world of giant warehouses and elf-piloted dirigibles. At its best, there’s a dreaminess to this film. In the film’s final third in particular, watching The Polar Express is like shrinking down to miniature size and exploring one of those ceramic holiday displays that some people set up on their side tables in December.

Is that why kids respond so strongly to The Polar Express? Because it feels like a trip into their own subconscious? If nothing else, the movie has a tone unlike the majority of modern kids’ movies. It’s not frenetic or oppressively wacky. It’s also not especially joyful or funny—but perhaps that all goes hand in hand. A lot of The Polar Express relies on the language and basic structure of a Christmas special, with all the talk about how Hero Boy is going through his “crucial year” (if Santa loses him he’ll never believe again!), and all the Arthur Christmas/Prep & Landing-like emphasis on the mechanisms of the North Pole operation. But then the movie shows Kris Kringle stepping out into a teeming throng that’s singing “Santa Claus Is Comin’ To Town,” and the effect is uniquely magical, not crass. It’s kind of a misfit toy, this Polar Express movie: Half of it plays like a breakneck thrill ride, and half of it is more like having a dull uncle read the book aloud, while a Christmas album with one great song and a bunch of filler plays in the background.

It’s highly possible that a whole generation has grown up loving The Polar Express movie not because of the movie itself, but because grown-ups kept showing it to them every year, often in party-like situations, as part of the general bonhomie of the holiday season. The film shines by association. It’s gingerbread. It’s egg nog. It’s the nondescript little ornament that keeps getting hung on the tree every Christmas until it’s impossible to imagine a Christmas without it.

Next month: The 2001: A Space Odyssey comic books.