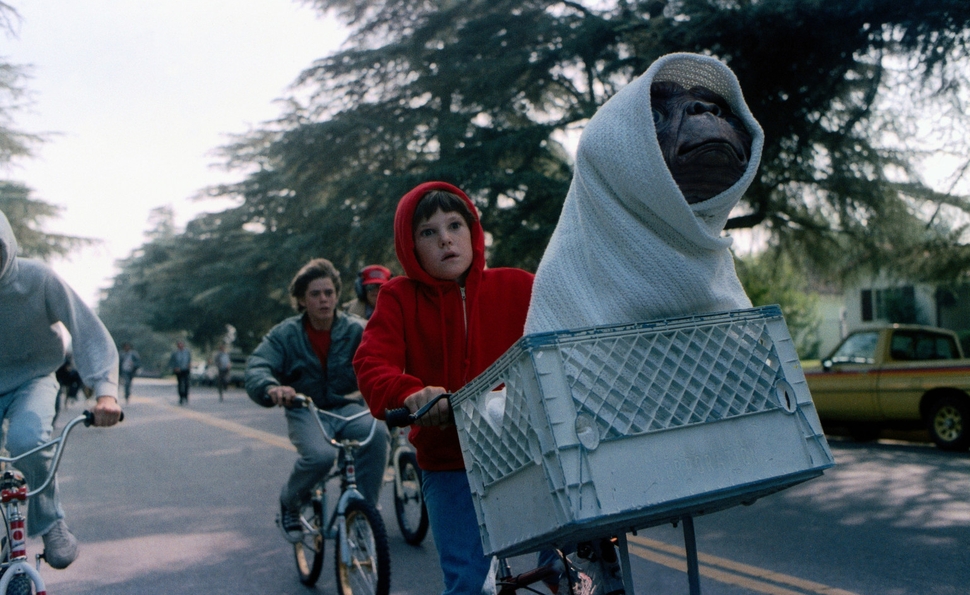 More than just movie merchandise, the E.T. novelization has a personality all its own 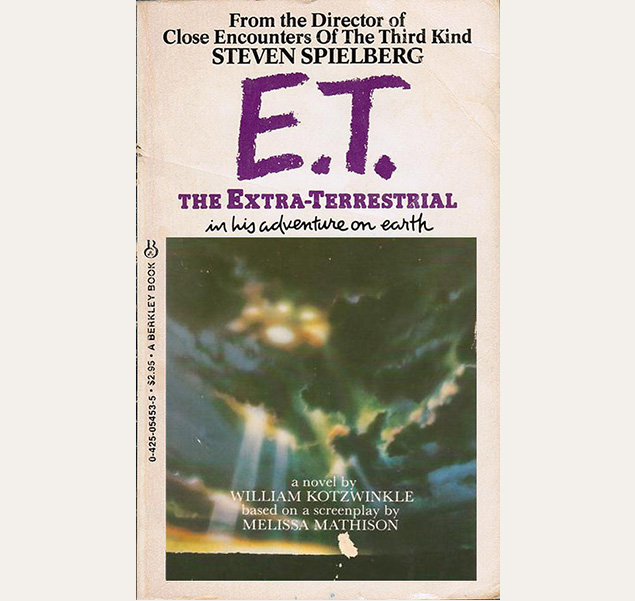 William Kotzwinkle’s novelization of Steven Spielberg’s 1982 blockbuster, E.T. The Extra-Terrestrial, was a piece of merchandise—make no mistake about that. After the Star Wars line of tie-ins became an unexpected cash cow in 1977, nearly every major motion picture’s marketing campaign began to include games, posters, T-shirts, bedsheets, lunch boxes, toys, and anything else that could simultaneously increase public awareness and make a little bank. The slim paperbacks that retell a movie’s story have never been a well-respected part of the publishing or film industries, because more often than not, they’re quickie jobs, in which writers flesh out early drafts of scripts with punchy descriptions of the action and characters. The medium survives because those books are reliable money-makers, luring devout fans of the films as well as people in airports looking for something short, exciting, and familiar to read during a flight.

Sometimes, though, the crassly commercial can take on a life of its own—again, as with Star Wars, where the action figures and playsets brought in hefty revenues and allowed a generation of kids to “play” the movie, developing their own ways to love it. When Spielberg gave Kotzwinkle a copy of Melissa Mathison’s E.T. script—and invited the offbeat fantasy writer down to his office to see what his squat little alien hero was going to look like—the director was throwing some decent-paying work to a writer whose 1974 cult novel, The Fan Man, he had enjoyed. It was up to Kotzwinkle to do what he did with the assignment: produce a beautiful book, which deepens and enhances the movie in ways few novelizations ever have. 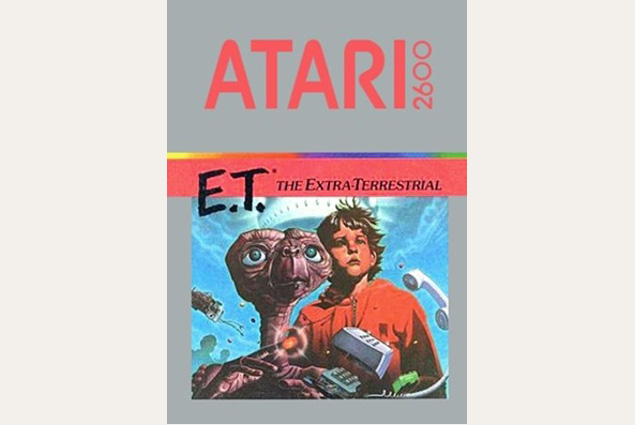 E.T. was also supported by a line of toys, but it wasn’t an easy film to take into the backyard and re-enact (as Atari learned when the company tried to turn E.T. into a videogame, and endured one of the biggest bombs in gaming history). Though the full title of Kotzwinkle’s novelization is E.T. The Extra-Terrestrial In His Adventure On Earth, “adventure” isn’t really the best way to describe Mathison’s story about a botanist from outer space who gets stranded in a California suburb and takes refuge with a family wracked by divorce. There’s a quest of sorts at the center of the plot, as the alien tries to fashion pieces of crude Earth technology into a rescue signal. He’s also on the run from the U.S. government, which wants to capture him for scientific study. But otherwise, this isn’t a movie with a lot of rip-roaring action or derring-do. It’s more about the psychic and emotional bond that develops between E.T. and Elliott, the lonely 10-year-old boy who finds him.

Kotzwinkle follows the movie’s story beats, as necessary. Aside from E.T. gobbling up M&M’s—the preferred candy in Mathison’s original script, before M&M’s/Mars balked at a creature so “ugly” endorsing its product—the rest of Kotzwinkle’s book zips through all the expected E.T. highlights. E.T. learns English thanks to a Speak & Spell. E.T. puts on a Halloween costume and goes trick-or-treating. E.T. drinks beer, which makes Elliott feel drunk. E.T. gets sick, and nearly dies. Elliott, his siblings, and the neighborhood kids help E.T. escape from his government captors, and reach his ship just in time. There’s scarcely a single memorable moment from the film that isn’t in the tie-in.

But “zips through” is the best way to describe how Kotzwinkle treats the plot. For anyone who hasn’t already seen the movie, E.T. The Extra-Terrestrial In His Adventure On Earth could be hard to follow, because all the dodging of shadowy bureaucrats and E.T. “phoning home” didn’t seem to interest Kotzwinkle much. He was more inspired by the way the hero communicates empathically with other creatures. And so E.T.’s preternatural sensitivity sets the tone for the book, which explores the characters’ interior lives with wryness and compassion.

In the opening pages, Kotzwinkle explains how E.T. pictures himself—as an “overgrown prickly pear” with “a bashed-in Brussels sprout” for a nose—and from there, he keeps adding dimension to a protagonist who in the movie barely says more than a dozen words. In the book, E.T. is sweetly self-deprecating, as he communes with cucumbers, attempts to mimic what he believes Earth customs to be, and stumbles into trouble due to his natural curiosity. In a 1985 interview with People magazine, Kotzwinkle says he always pictured E.T. as “this scorned Chaplinesque figure who at the same time is sort of a redeemer,” which is why he has so much fun in the novelization with E.T. as a comedic fish-out-of-water, bravely but clumsily adjusting to his new surroundings. 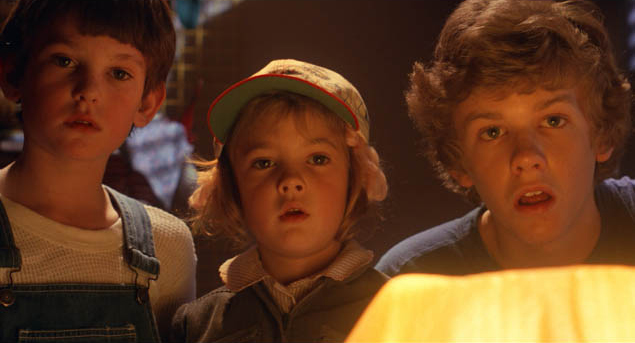 Kotzwinkle also deftly describes the kids in E.T.: three largely self-sufficient middle-class suburbanites who’ve taken all their hurt feelings about their absent father and directed them toward each other (and toward the collection of nerds and blockheads with whom they play Dungeons & Dragons). Kotzwinkle even gets inside the head of their dog, Harvey, who spends long passages of the book regretting all the shoes he’s eaten, and wondering whether he can eat E.T.

Outside of E.T., Kotzwinkle pays the most attention to Elliott’s mother, Mary, who barely does anything in the movie, but in the book becomes essential to the overall theme. Readers learn all about Mary’s tedious job, her nonexistent love life, and her worries that she’s neither feeding nor raising her kids properly. Just like E.T., Mary is prone to gallows humor, which may be why the alien is drawn to her. (In his head, he calls her “the willow creature.”) Mostly, Kotzwinkle’s focus on Mary emphasizes how these characters persevere through their sorrow, and how E.T.’s connectedness—to people, to plants, and to the primal life-force that governs the entire universe—alternately elevates his host family’s spirits and breaks their hearts. The movie E.T. is about how it feels to be a child of divorce, accustomed to solitude and brokenness. The book is more about being a divorcée, and realizing that while love gives life meaning, it also brings devastating pain.

In an interview with Ron Hogan, Kotzwinkle says that having a built-in audience for his E.T. novelization allowed a rare opportunity to express something deep and true to millions of readers. “How do you write to reach the most people?” he asks Hogan. “What’s the simple message that will liberate them from their misery, enlighten them in some way?” Kotzwinkle carried that question with him throughout the five months he spent writing E.T. The Extra-Terrestrial In His Adventure On Earth—an unusually long amount of time for a tie-in—and he was rewarded with a bestseller, which moved more than 3 million copies during its first three years in print.

The movie’s success led Steven Spielberg to consider a sequel, which he actually began developing with Mathison before he decided that telling any more stories onscreen with E.T. and Elliott would diminish the original’s sublime simplicity. E.T. was never meant to be a saga; it was more about a moment, a place, and a feeling. Nevertheless, Spielberg did share some of his sequel ideas with Kotzwinkle, allowing the writer to continue his version of this universe in the 1985 novel E.T. The Book Of The Green Planet. In Kotzwinkle’s follow-up, E.T. returns to his homeworld, where he’s treated as wayward and untrustworthy by his people. While making plans to steal a spaceship and return to Earth, E.T. spends his spare moments sending a tiny, telepathic replicant of himself to watch over Elliott, as the boy steamrolls head-on into his first teenage crush. 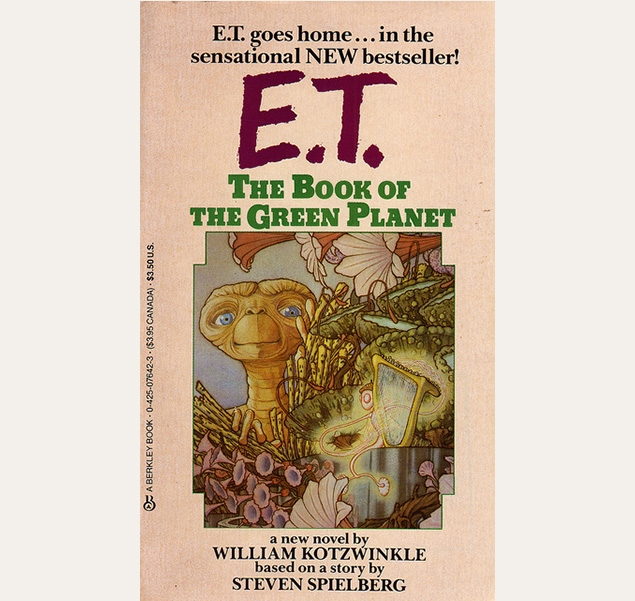 The Book Of The Green Planet is, to put it mildly, one weird-ass piece of work. It’s pitched to fans of the novelization, those inclined to appreciate Kotzwinkle’s lightly comedic passages from E.T.’s point of view, along with his brief updates on the lives of Harvey and “the willow creature.” Kotzwinkle references a few elements that were only in the film, not his book. (E.T. craves Reese’s Pieces in The Book Of Green Planet, for example.) And by making E.T. more obsessed with Elliott, Kotzwinkle gives that relationship far more weight than he did the first time around—reflecting the movie’s concerns more than his own. But mostly, Kotzwinkle tries to make The Book Of The Green Planet into a William Kotzwinkle novel, by spending more than half the text on descriptions of E.T.’s Seussian homeworld, populated by Flopglopples, Fluteroots, and Jumpums.

The most effective stretches of The Book Of The Green Planet deal with E.T.’s “one week after summer camp” melancholia, as he pines for old friends and old habits, and worries that he’s going to his lose his connection with Earth. Even when E.T.’s replicant swoops in and improves his host-family’s lives—by grabbing the attention of the girl Elliott likes, by helping Michael make the football team, and by getting the coin machine at the laundromat to spew quarters at Mary—none of them know E.T. is responsible. They just have that familiar feeling of a healing presence nearby, interlaced with a sense of loss. That’s the mood Kotzwinkle set so well with E.T. The Extra-Terrestrial In His Adventures On Earth: lightness and whimsy, balanced with a hefty dollop of the forlorn.

Who deserves credit for the success of that first E.T. novelization? The dialogue and action come almost verbatim from Melissa Mathison’s script, which was inspired by conversations Mathison had with Spielberg about his childhood, along with a subplot from an abandoned science-fiction/horror project he’d been developing (or that, according to some, Spielberg was ripping off from an unfilmed 1967 story by Indian filmmaker Satyajit Ray).

But Kotzwinkle’s version of E.T. has its own personality, serving almost like a fan’s appreciation of what Spielberg and Mathison created. There’s always been a lot of space between what the characters do and say in a movie. In E.T. The Extra-Terrestrial In His Adventure On Earth, Kotzwinkle played merrily in those gaps.