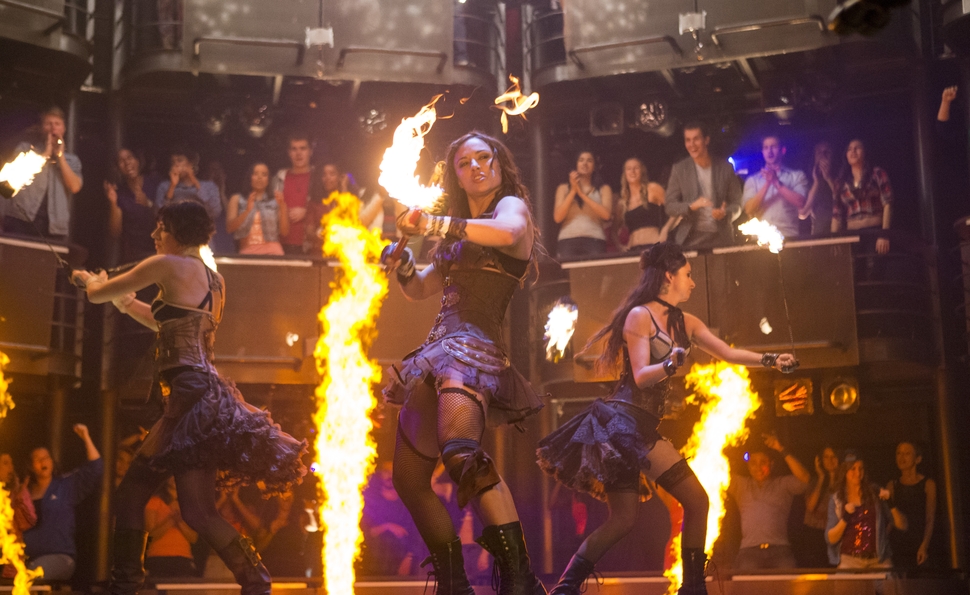 Step Up All In

At this point, the Step Up franchise—five entries strong and growing—is gaining cast members at such a clip that theaters might want to consider handing out charts along with 3-D glasses, just so audiences can keep track of who’s returning from which sequel, and what their relationships are to all the other characters. It doesn’t help that the characters are largely interchangeable from film to film. It’s hard to tell one passionate street dancer willing to risk it all for a dream from another when these films occupy a universe where most people are passionate street dancers willing to risk it all for a dream, and the rest are evil land developers, sinister reality-show schemers, and various other one-dimensional bad guys who exist solely to bedevil the generic protagonists.

For those Step-heads keeping score, Step Up All In brings back Enrique Iglesias lookalike Ryan Guzman, star of the series’ fourth film, Step Up Revolution, whose incendiary, politically charged flash-mob sequences had audiences famously rioting in theaters. Guzman plays hot-blooded dancer Sean Asa, opposite Briana Evigan’s Andie West, a hot-blooded dancer who has not graced this series with her joyless presence since 2008’s Step Up 2: The Streets.

Fan favorite Adam Sevani returns as Robert “Moose” Alexander, a young man who over the course of his four films in the series (Step Up 2: The Streets, Step Up 3-D, Step Up Revolution, and this one) has made a remarkably boring evolution from gawky geek to sexy, tanned Angeleno. Once, his incredible dance prowess stood in comic contrast to his nerdy appearance. Now, he looks more comfortable dancing with beautiful women than wearing his lab suit. In small doses, Moose was a delight. As a lead character, he’s a whole lot less charming.

As for original Step Up star Channing Tatum, he got the hell out long ago and never looked back. He left the low-wattage likes of Guzman to carry the franchise forward, by playing a young man who’s discovered the hard way that the flash-mob shenanigans he and his crew conducted in Revolution have failed to impress the Hollywood establishment. Unable to find jobs, and running out of the money they made from a Nike ad six months earlier, Asa and his crew discover an opportunity that could change their lives: a VH-1 reality dance competition called The Vortex that promises its winner a three-year television contract.

The Vortex is hosted by Alexxa Brava (Izabella Miko), a Lady Gaga figure whose eye-rolling, head-swiveling, twitchy performance suggests she sees the film as a feature-length audition for the Gina Gershon role in a Showgirls remake. It’s a total drag-queen turn that calls upon Miko to never stop voguing and playing to the camera, even in her private moments. Like Lady Gaga, Alexxa delights in turning herself into a living piece of topiary—think the hedge maze in The Shining, only as a sexy lady—and her enormous, elaborate, yet revealing outfits are triumphs of design and construction. She doesn’t seem to be wearing them so much as they’re wearing her.

Miko’s performance embodies the campy, theatrical shamelessness that’s the film’s most winning quality. Step Up All In throws in a sequence of children dancing that does nothing to advance the plot, but does offer the crowd-pleasing spectacle of adorable tots busting moves. It would not be terribly surprising if a deleted scene features the cast playing with kittens and puppies for five minutes while gyrating lazily.

The film’s most enjoyable dance numbers similarly illustrate a contempt for realism. In one, Moose uses the laboratory where he works to tape an audition video for The Vortex, and his humble workplace magically assumes the size, dimension, and cost of the set of Metropolis or Intolerance, as Moose and his compatriots let loose in an extended homage to “Frankenstein.”

The climactic dance sequence is even more blatant in its disregard for verisimilitude, in that it features the prominent, extensive use of fire in ways that would undoubtedly get the crew fired, and also possibly killed. Step Up All In is a slave to spectacle over logic. It’s a world where most conflicts are resolved via elaborate dance battles, and the principal villains conspire to rig the contest and screw over the heroes in hilariously transparent ways. For example, if the host of a show is in cahoots to rig a contest for the dancer she’s having sex with, it probably isn’t wise to also prominently feature that dancer in music videos watched hundreds of millions of times and disseminated all over the world. The whole idea of having a secret, conspiratorial relationship is to keep the conspiring secret. Instead, Alexxa is just as flamboyant and over-the-top in her machinations as she is in every other facet of her existence.

Step Up All In runs a generous 112 minutes. That time is evenly divided between fun, visually dynamic dance sequences and painfully contrived, non-starting melodrama recycling the themes that have been wrung dry not just by the four previous Step Up installments, but by the countless films they ripped off.

The exuberant dance sequences have long been the series’ saving grace, but even those are starting to feel redundant and interchangeable. There are only so many ways sweaty young people can gyrate toward a 3-D camera, and Step Up All In is close to exhausting them all. The film’s inane plotting and atrocious dialogue wouldn’t be so frustrating if the franchise hadn’t decided to focus on Sean and Andie, its two least-charismatic, least-entertaining characters, who have no chemistry either as foes or as love interests. It’s telling that the only time these characters seem remotely charming is during a flirtatious shared dance to Bobby Brown’s 1988 hit “Every Little Step.”

Early in the film, Sean tells audiences that a whole lot of bullshit goes along with dancing: rejection, exhaustion, being broke and defeated all the time. He could be talking about dance movies as well. A whole lot of bullshit accompanies those blessed moments of movement and excitement: terrible dialogue, terrible plotting, terrible performances. The hassles of the dancer’s life is the price he has to pay for pursuing his passion, just as the awfulness of dance movies are the price audiences have to pay for watching people dance. That price seems steeper and steeper with each successive, inessential addition to this strangely deathless franchise.

GoWatchIt: Buy. Rent. Stream Step Up All In