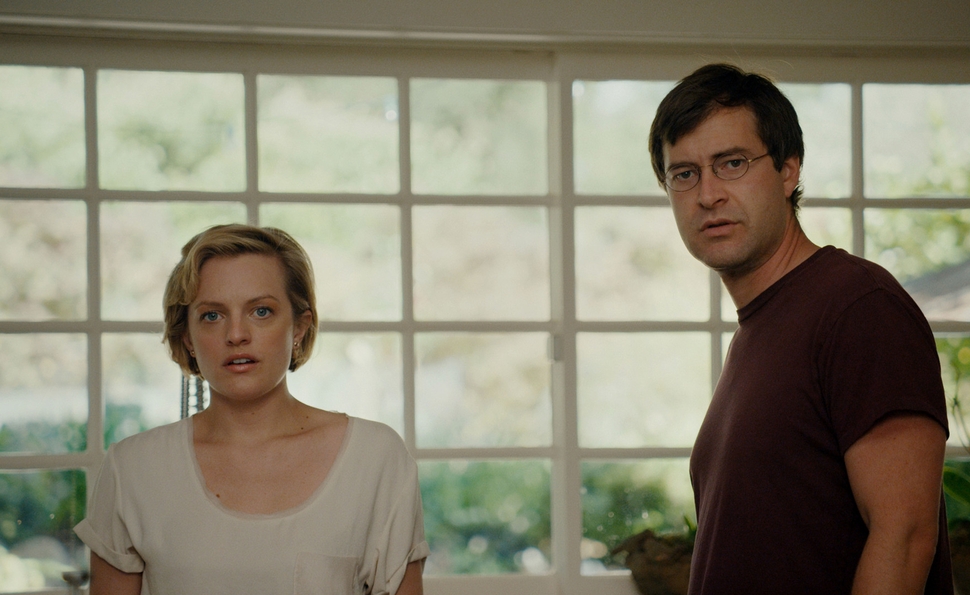 The One I Love

[Note: The following review includes discussion of an early twist in The One I Love. The spoiler-averse are advised to proceed with caution.]

The One I Love spins off into Charlie Kaufman-esque metaphysics, it opens with a simple, potent anecdote about how relationships change over time. While in therapy to save their floundering marriage, Ethan (Mark Duplass) and Sophie (Elisabeth Moss) talk about the night they first met, the excitement of their instant connection, and their spontaneous decision to end the evening by leaping into a stranger’s pool. Years later, with their relationship on the rocks, they sneak into the pool again, hoping to spark a little of the same magic—or at least a small pulse of nostalgia—but the attempt is flat and contrived, and it deepens the schism between them. It’s plainly obvious that they’ve lost that original connection and excitement, but it’s more than that: They haven’t adjusted to the reality that all relationships lose that original excitement and have to adjust to a new set of conditions, perhaps deepening in the process.

With apologies to Who’s Afraid Of Virginia Woolf? and The Twilight Zone—both of which are dutifully acknowledged in the dialogue—The One I Love takes that lesson into a playfully abstract realm. Taking their therapist’s suggestion, Ethan and Sophie travel to a secluded retreat in Northern California in an attempt to save their marriage. Once there, they find themselves. Literally. When one of them leaves the main house on the property and enters the guest house, they find a doppelgänger of the other waiting for them. What’s more, the doppelgängers are considerably more charming, attractive, and accommodating than the original characters. Ethan and Sophie are naturally freaked out by this development, but they’re intrigued enough to explore it a little more—ostensibly as a trust exercise, but secretly because they like spending time with these alien, idealized versions of their partners. Ethan likes that fake-Sophie cooks him bacon; Sophie likes that fake-Ethan says all the things she’s been wanting to hear from her husband.

In its terrific second act, once the ball really gets rolling on this premise, The One I Love is playful, funny, and insightful about demonstrating the distance between Ethan and Sophie when they first fell in love, and the prickly, caustic, suspicious creatures they’ve become. First-time director Charlie McDowell, working from Justin Lader’s knotty script, neatly exploits the screwball potential of the parties intermingling, like Ethan being jealous of himself, or Ethan and Sophie sneaking out on each other to hook up with each other. Duplass and Moss, who improvised much of their dialogue in collaboration with the filmmakers, have such a fine sense of where their characters (and their doubles) are at in any given moment that the signifiers—real Ethan wears glasses, fake Sophie pins her hair back and wears makeup, etc.—may not have been necessary. Beyond the brain-teasing confusion caused by Ethan and Sophie cavorting with doubles, the film deftly sorts through the transformation in their relationship, as they conspire and betray in roughly equal measure.

But when it comes time to get to the bottom of what’s really going on, McDowell and Lader start losing the thread. It’s debatable whether the audience needs to know who these doubles are and how they came to be—weird metaphysical premises like this one are allowed to set their own rules—but the solution Lader’s script devises breaks the film’s internal logic, and sows more confusion than it resolves. What’s more, it distracts from the relationship issues that the film illuminates so successfully in the middle section. The One I Love recovers with a satisfying denouement that throws out a compelling observation about what we really desire in a partner. And it certainly leaves the audience with questions to discuss. But what question do the filmmakers want people to ask when it’s over: “What happened?” or “What does it mean?” Clever and accomplished as it is, The One I Love prompts too much of the former.

GoWatchIt: Buy. Rent. Stream The One I Love