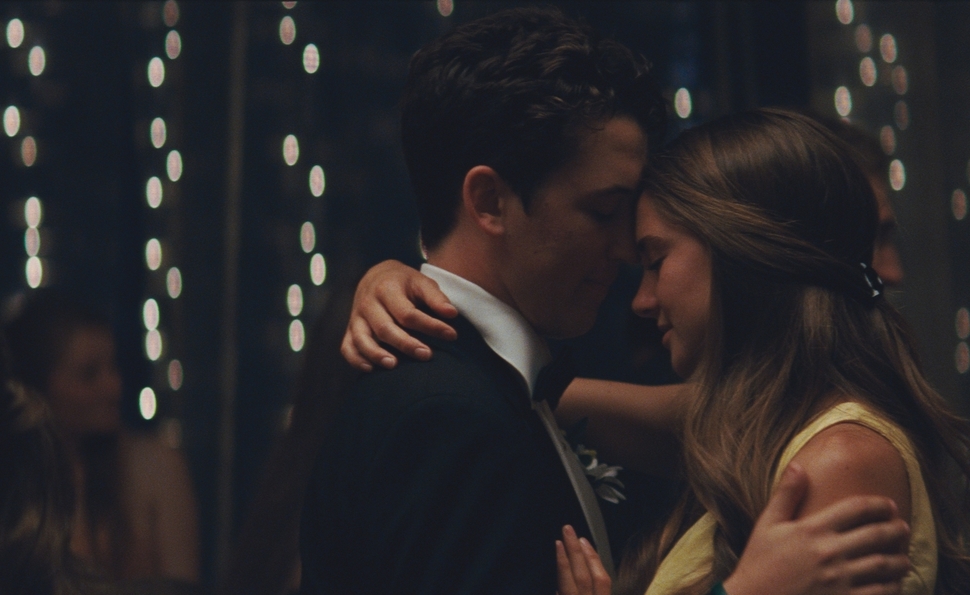 The Spectacular Now has been touted as a throwback to the teen romances of the 1980s, like the John Hughes/Molly Ringwald team-ups of Sixteen Candles and Pretty In Pink, or, better still, Cameron Crowe’s Say Anything… The comparison doesn’t hold up entirely: The film’s unvarnished look is more 1970s than 1980s, and director James Ponsoldt and his screenwriters, Scott Neustadter and Michael H. Weber, mostly steer clear of retrograde Hughes stereotypes. That tendency could get pernicious (Long Duk Dong, anyone?), but was more often guilty of assigning all teenagers a place along the nerd-jock continuum. Yet in their best moments, those earlier films have an absolute sincerity that’s become harder to find in subsequent decades, when teen rom-coms are no less synthetic and gimmicky than the dross served to adults. The Spectacular Now shares with them the simple virtue of taking young romantics seriously as they make a connection and try to sort through a complicated present and uncertain future.

Based on Tim Tharp’s novel, the film unfolds through the eyes of Sutter Keely (Miles Teller), a hard-partying type who seems destined to grow into one of the various womanizing cads Gerard Butler has played over the years. Sutter is a fun guy to have around, but as the end of his senior year approaches, his popular girlfriend (Brie Larson) recognizes his limits and dumps him, and the rest of his peers keep him at a distance, too. When Sutter takes up with Aimee Finicky (The Descendants’ Shailene Woodley), a smart, good-natured girl with zero romantic experience, it looks to everyone like Bambi vs. Godzilla: She’ll give him her heart, he’ll smash it into a thousand pieces. He won’t mean to do it—he’s caring and means many of the nice things he says to her—but Sutter’s live-in-the-moment philosophy, combined with a casual drinking habit that bears a strong resemblance to alcoholism, isn’t suited to a young woman of ambition. She will eventually require more than he can give her.

The Spectacular Now doesn’t play out according to that script, but Sutter’s self-destructive tendencies threaten to sabotage the relationship at every turn. Aimee’s intense vulnerability is all the more heartrending under these storm clouds, but the film gives their bond strength and complexity, too, particularly in a common angst over absent fathers and overbearing mothers. Both come from working-class homes that Ponsoldt underlines without overplaying: Sutter’s mother (Jennifer Jason Leigh) scolds him relentlessly when she isn’t working shifts as a hospital nurse, and Aimee’s mother, always offscreen, makes her A-student daughter get up early to run a paper route, and has no intention of letting her to college. For Sutter and Aimee, love brings the potential for terrible things, but also a level of intimacy that gives them strength and offers the possibility of reaching a better place.

Neustadter and Weber are also the screenwriting duo behind (500) Days Of Summer, a better-than-average version of the slick rom-com-ification that infects too many indie love stories. If their Spectacular Now script originally had any of the earlier film’s cutesiness, then the candor with which Ponsoldt and his cast approach the material has effectively beaten it into submission. Whether by accident or not, The Spectacular Now feels of a piece with Ponsoldt’s last film, Smashed, about another pair of codependent alcoholics (Mary Elizabeth Winstead and Aaron Paul) who fall to pieces when the party is over. Sutter corrupts Aimee with his boozing, and she’s too smitten to balk at his habit of surreptitiously spiking his Big Gulps. She wants to have fun and not be a scold, and the good times bring them closer together. It isn’t just the drinking that links Smashed and The Spectacular Now, but also the fragile symbiosis that’s part of many relationships, one that can break apart with a shift in the wind.

The Spectacular Now isn’t entirely free from missteps and contrivances. A framing device that has Sutter wrestling with a college-entrance exam question about how he faced a challenge or hardship is too cute, and sets up the entire film as a big life lesson he’s about to learn. And though the filmmakers are honest about Sutter’s tendency to drink and drive—and are admirably willing to challenge the audience’s sympathy for him—they set the table for a payoff that’s both inevitable and grossly manipulative. Then there’s a subplot that sends Sutter off to see his deadbeat dad (Kyle Chandler, excellent under the circumstances), which ends exactly as all stories about kids meeting their deadbeat parents end, with the added irritation of drawing too-easy parallels between father and son.

But even in its rougher patches, The Spectacular Now has a disarming earnestness that keeps it on the level, helped along by two superb lead performances that add up to more than their sum. Neither Teller nor Woodley are conventionally glamorous, and Ponsoldt’s naturalistic touch keeps their characters down to earth. Teller excels as a silver-tongued charmer who seems to live to disappoint people who expect better from him: his ex-girlfriend, his mother, his geometry teacher (The Wire’s Andre Royo), his employer at a men’s clothing store (Bob Odenkirk). But Woodley is the film’s true lynchpin, playing the type of teenager who doesn’t have the confidence or experience to stop herself from falling in love with the wrong guy. Woodley makes Aimee’s indulgence of Sutter ring piercingly true: her half-giggles at his jokes, her adoption of his boozing habit, her melting at the slightest bit of romantic attention. She’s the audience’s tender surrogate, and a touching reminder that there’s nothing as potent or dangerous as young love.