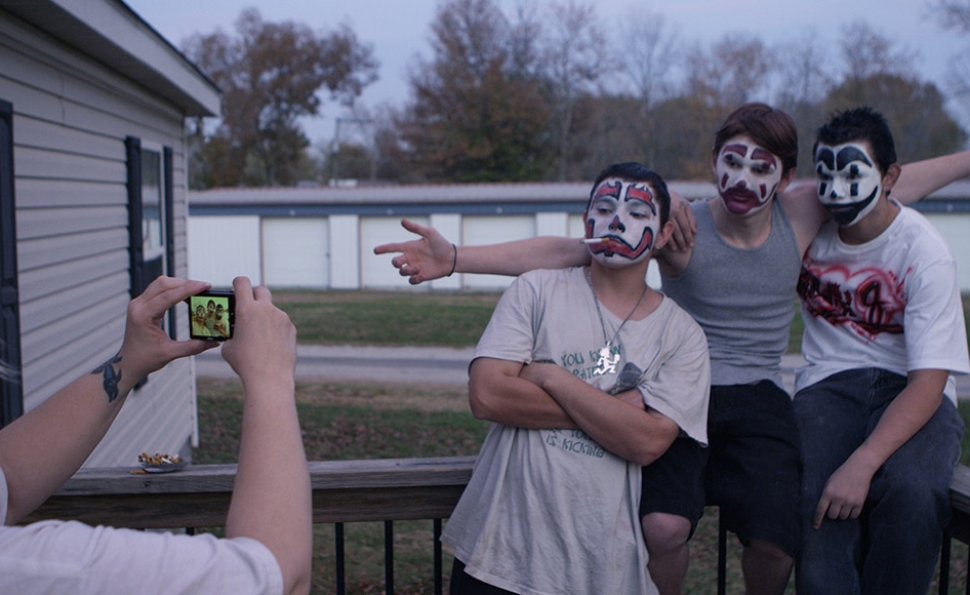 In a film that avoids generalities and grand theses, much less the sermonizing and info-dumping of activist documentaries, the closest Rich Hill comes to a political statement is its title. Rich Hill is the name of a small town in Missouri where its three subjects, all adolescent boys living well below the poverty line, live on the margins. Much like David Lynch in the opening sequence in Blue Velvet, directors Tracy Droz Tragos and Andrew Droz Palermo—the latter doubling as cinematographer, and revealing an extraordinary eye—shrewdly play up the iconography of heartland America as a means of dismantling it. There are carnivals and Independence Day parades, fireworks and football games, all photographed to make Rich Hill, population 1,393, look like the perfect stage for a politician’s whistle-stop tour. Just so long as the cameras don’t face the wrong side of the tracks.

What do the three boys in Rich Hill have in common? They’re poor, and face the daily stresses and long-term doubts that go along with being poor. Otherwise, Tragos and Palermo don’t force connections or turn them into case studies as part of a larger appeal for better education or juvenile justice or social services; in fact, they never cross paths and don’t appear to know each other. The film instead burrows as deeply into their specific circumstances as possible, with a goal no more or less lofty than making invisible children visible, in all their heartbreaking vulnerability and resilience. Perhaps the most poignant element about Rich Hill is that the boys treat the camera as a friend, someone who can finally listen to their thoughts—or at least take a look at their cool new knife.

“God has to be busy with everyone else. And hopefully He will come into my life. I hope it happens. It’s going to break my heart if it don’t.” So says Andrew, the most optimistic of the trio and arguably the best off, despite being part of a family that moves from city to city and home to home constantly, as his father chases dead-end dreams and dodges unpaid utility bills. The family unit remains intact: Andrew adores his bright sister and his largely shut-in mother, while indulging his dad’s restless ambition, which includes stints as a Hank Williams Sr. tribute artist, a bid to become a prospector, and vast piles of losing Powerball tickets.

Circumstances are considerably more dire for 15-year-old Harley and 13-year-old Appachey, both of whom are radiant with anger and hurt, and show the potential for dangerous violence. Harley’s mother is serving time for an assault connected to an incident of sexual abuse that’s severely crippled his psyche; his grandmother can’t handle his hair-trigger temper, and his near-daily presence in the principal’s office suggests the school can’t, either. For his part, Appachey lives in filth with his siblings and a mother who smacks them around and fills the house with vicious obscenities; he chain-smokes, starts fights, and has a glare worthy of Jack Nicholson in The Shining. He talks about wanting to make art in China, where they paint awesome dragons and shit, but the closest he comes to making art is smashing an ice puddle with his skateboard and watching the broken shards glimmer in the sunlight.

Tragos and Palermo catch wonderful incidental details like that, when the boys share an odd thought, or when the filmmakers get a specific sense of what their domestic lives are like. In one scene, Andrew’s father prepares a bath by filling the tub with water heated from multiple sources: an upturned iron, a hot plate, a coffee pot; in another, Harley’s grandmother weighs his request for a four-pack of energy drink against the $200 in food stamps she has to stretch for the rest of the month. Make no mistake: Rich Hill is a social document, and conclusions can and should be drawn from its beautiful, empathetic portrait of life on the fringes. But Tragos and Palermo content themselves with shining a light and leaving it at that.

The American Dream has a cruel allure in Rich Hill, from the patriotic hoopla that rolls through town on July 4 to the delusions of Andrew’s father to the despair of Harley and Appachey’s mothers, who separately confess to never having dreams and never having a chance at a better life. In all cases, what doesn’t seem graspable in this Land Of Opportunity is success; when Andrew talks about mowing three yards for $20, it has the ring of a classic anecdote of an American boy pulling himself up by his bootstraps, but all it buys him is a cheeseburger and some football gloves. While Tragos and Palermo don’t make it their mission to extinguish all hope, few films are as suggestive of the long odds facing the poorest of the poor. A boy who bathes in water heated by a hot iron and a coffeepot isn’t thinking about college and a career and the house with the white picket fence; he just wants to survive the day and pray for a better tomorrow.