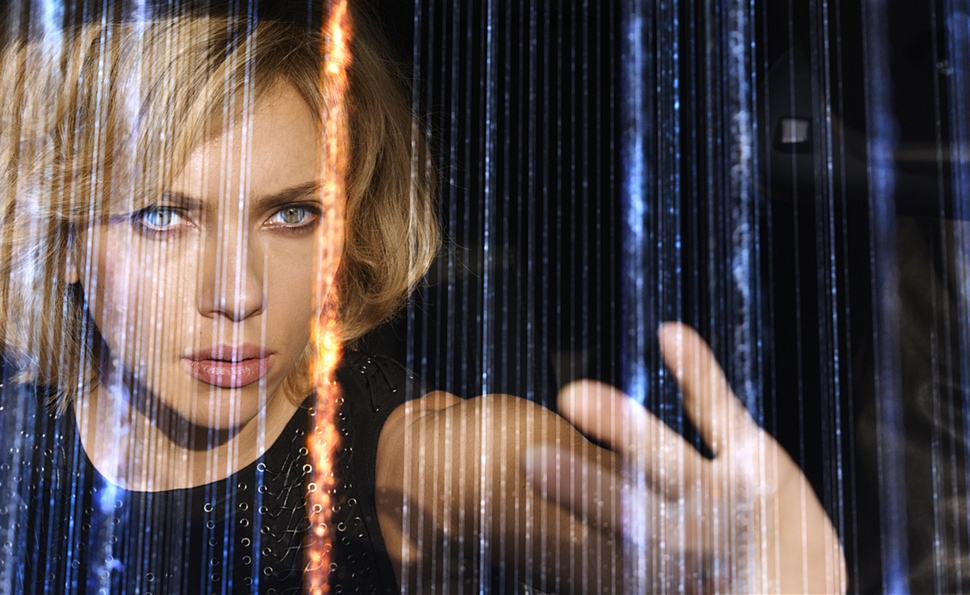 Luc Besson has an uncanny ability to boil any premise, no matter how singular or distinctive, down to a bunch of guys shooting a bunch of other guys. Whether it’s a movie about a jail in space, a man who thinks he’s a dog, a far future where a perfect woman is humanity’s only hope to defeat an alien evil, or a dystopia where people are rounded up into ghettos and also do parkour, Besson always seems to find a way to tie things up in an elaborate gunfight. In Besson’s new film Lucy, a woman achieves godlike intelligence in one room, while two groups of dudes shoot at each other in the next. One even uses a bazooka!

This is the danger inherent in movies about extremely smart characters: They can only be as smart as the people who create them, and Lucy plays like 2001: A Space Odyssey as reimagined by a pothead college dropout who watched clips of Stanley Kubrick’s masterpiece on his iPhone while taking a self-defense class. Equal parts high-minded (or maybe just high) science fiction about the origins and destiny of human consciousness, and low-brow Eurotrash action flick complete with sadistic violence, breakneck car chases, and, yes, a bazooka, Lucy earns points for its unpredictable treatment of its vaguely superhero-ish premise and an appealing silliness, but it struggles to match wits with the genius at its center.

That’s Scarlett Johansson’s Lucy, introduced in ultra-short skirt and cheetah-print jacket as her new boyfriend seduces (and then coerces) her into delivering an all-important package. In short order, the boyfriend is dead and Lucy is cowering before the package’s intended recipient, a ruthless Korean gangster named Mr. Jang (Oldboy’s Choi Min-sik). Besson playfully intercuts this sequence with stock-footage punchlines; when Lucy senses danger, Besson inserts a shot of a mouse approaching a baited trap. As Jang’s men surround her and toss her in an elevator, the screen fills with images of cheetahs stalking a gazelle.

What follows could be described as the story of a gazelle who becomes a cheetah. Jang forces Lucy to mule the package’s contents—an experimental new drug called CPH4—back to the United States, but before she even makes it onto her flight, the bag containing the electric-blue narcotic bursts inside her abdomen, leaking its contents into her bloodstream. The CPH4 enables Lucy to access the 90 percent of the human brain most people never use (at least according to a persistent urban legend and Luc Besson), which gives her all kinds of superpowers that are helpfully explained in occasional lecture sequences featuring Morgan Freeman’s Professor Norman. Dolphins, Norman says, have access to 20 percent of their brains, which gives them sonar. At 30 percent, he speculates, someone could gain telepathy, or even telekinesis. After just a few hours on CPH4, Lucy proves him right—by coldly killing her captors, setting off on a wild chase for the last remaining supply of the magical drug, and unlocking the secrets of time and space. She even acquires a French cop sidekick (Amr Waked), because the only thing more obligatory in a Luc Besson movie than a gunfight is a French cop sidekick.

It’s a pretty dopey way to make a movie about superior intelligence, but it’s a perfectly satisfactory introduction for a thriller, and the opening scenes are filled with tension and humor. The payoff doesn’t live up to the premise, though. Lucy evolves too quickly from super-smart badass to unfeeling robo-woman with access to all earthly knowledge, and Besson, who’s more focused on pacing than logic, never slows down to establish any rules regarding her abilities. One minute, she can read minds; the next, she can swat people into the air with a wave of her hand. Later, she explodes into a million tiny particles, then reconstitutes as if it never happened. While the characters yak about evolution, the film’s third act devolves into a series of meaningless special-effects sequences.

Part of that is surely by design; Lucy’s rapid ascent to the status of human computer reinforces the ever-widening gap between her and the average viewer. But that doesn’t make her parade of powers any more dramatically satisfying. Neither does Johansson’s performance as Lucy. Besson’s screenplay requires her to grow increasingly distant and cold as she approaches intellectual perfection. Returning to the same blank glare she used to greater effect in Under The Skin, Johansson’s Lucy strips herself of any vulnerability (“obstacles,” as she calls them) and, in turn, strips the character of any reason to root for or care about her.

The sheer weirdness of its plot twists (including a trip back to the dawn of man), a couple of decent action scenes (including a white-knuckle race through Paris), and Besson’s flair for upending expectations (as when he teases a big kung-fu fight between Lucy and Jang’s goons, and then does something else) keep Lucy an entertaining watch right up until the extremely disappointing finale. Besson may have wanted to make his 2001, but he’s a lot more successful when he sticks to the over-the-top action he does best. The film’s straining for any kind of grander meaning or importance just comes off like druggy rambling—not shocking for a movie whose basic message seems to be, “The more drugs you do, the smarter you get.”