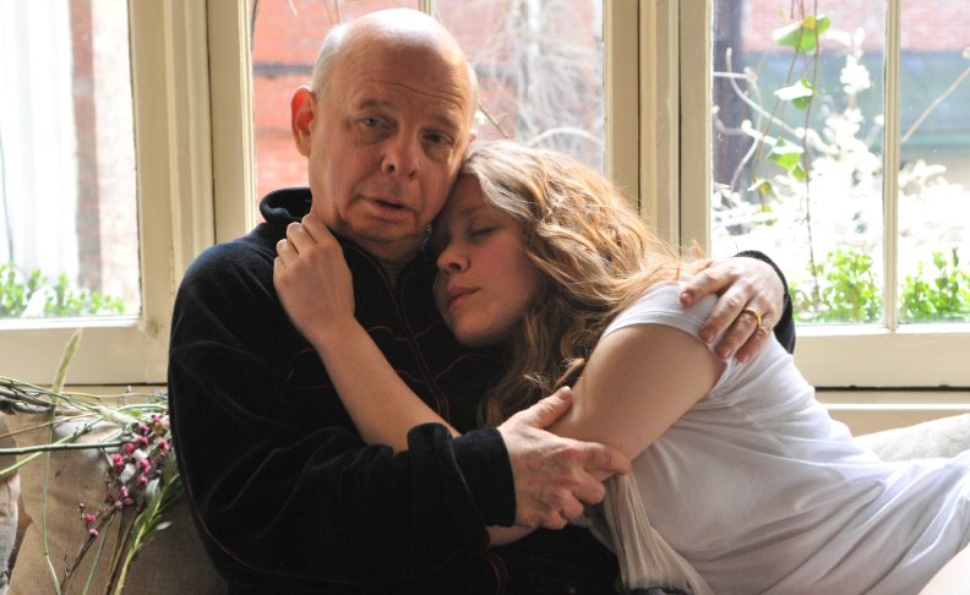 Wallace Shawn and Andre Gregory are two of a very particular breed of theater folk: well-versed in the classics, willing to experiment, and committed to the idea of theater for the sake of theater. Shawn and Gregory were first introduced to moviegoers as a duo in My Dinner With Andre, where, with the help of director Louis Malle, they turned their own lives and friendship into an onscreen conversation as well-honed and well-delivered as a great play. Then Shawn, Gregory, and Malle re-teamed for Vanya On 42nd Street, a filmed document of an Anton Chekhov production that Shawn and Gregory had rehearsed with friends for years, mostly for pleasure. Now the two have done something similar with the new film A Master Builder, only rather than performing Chekov over and over in a crumbling old theater, they’ve been rehearsing Henrik Ibsen’s The Master Builder in private homes; and director Jonathan Demme shot the movie in a ritzy, sunlit New York club.

Shawn stars in A Master Builder as Halvard Solness, an architect so successful that none of his colleagues can compete—not even his former boss, Knut Brovik (played by Gregory), or Brovik’s up-and-coming son Ragnar (Jeff Biehl). Solness maintains his position through emotional manipulation, holding on to both his protege, Ragnar, and his attentive bookkeeper, Kaia Fosli (Emily Cass McDonnell), by pairing them romantically, and then suggesting he could easily break them up if either of them were to leave him. Solness meets his match, though, when he’s visited by Hilda Wangel (Lisa Joyce), a young woman who claims to have met Solness when she was 13 years old, when he made sexual advances toward her and then promised to return to sweep her away in 10 years and build her a castle. Hilda’s motives for showing up unannounced on Solness’ doorstep are unclear, but she captivates him, and she begins to manipulate the manipulator, impeded only by Mrs. Solness (Julie Hagerty), a cold woman who resents her husband, but doesn’t want anyone else to have him.

Demme’s film was originally called Fear Of Falling—a terrible title—but was aptly renamed as A Master Builder, because the movie isn’t exactly The Master Builder. Shawn wrote his own translation of Ibsen’s play, and makes a few changes, including adding a framing device that has Solness on his deathbed, possibly dreaming Hilda’s visit. (Demme changes his visual style to mark the change, shooting the deathbed scenes as raw, Lars von Trier-like docu-realism, then making the body of the film more polished and softly lit, like a domestic melodrama.) Shawn’s version also brings the undertones of sexual need in Ibsen’s play right to the surface, aided greatly by Joyce’s performance as Hilda. The relatively unknown Joyce is stunning in A Master Builder: simultaneously flirty, wounded, giddy, and sociopathic. She brings a mercuriality to Hilda that makes the character seem all the more like someone conjured up by Solness’ subconscious, as a way of torturing him for satisfying his desires at others’ expense.

Aside from those few tweaks (and a truncated ending), Shawn’s adaptation mostly follows Ibsen’s original text, which is what keeps A Master Builder on the level of a well-meaning but only intermittently electrifying exercise. Demme honors the intimacy of Shawn and Gregory’s original rehearsals, shooting the actors as though they have no choice but to be right on top of each other, when they’re actually in fairly roomy spaces. This approach to the blocking, combined with Shawn’s unwillingness to abridge the text, means several scenes in A Master Builder drag, with little of visual interest to break up conversations that go in circles.

It doesn’t help that so much of Ibsen’s play is metaphorical. Solness’ egomania can be read as representative of artists’ selfishness in general, while Solness’ preference for gaudy homes over churches is an example of a certain creative caution, masked in pretension, that sets in when artists get too comfortable. These are strong themes, which leave a lot to chew on when the movie ends. But Demme, Shawn, and Gregory don’t do enough to convert them into gripping cinema.

Still, though A Master Builder is disappointing for not being a great film (as My Dinner With Andre and Vanya On 42nd Street both are), it’s affecting as another record of Shawn and Gregory’s passion for theater. One advantage of both Vanya On 42nd Street and A Master Builder’s modern-dress, minimal-sets take on the classics is that it blurs the distinction between actors practicing, actors performing, and actors sitting around backstage and giving each other notes. A Master Builder is like a local book club writ large. Where some people read novels and discuss them in depth, Shawn and Gregory learn more about plays by reciting the lines with friends, off and on for years, until they can explain what they think about the text by bringing it to life.