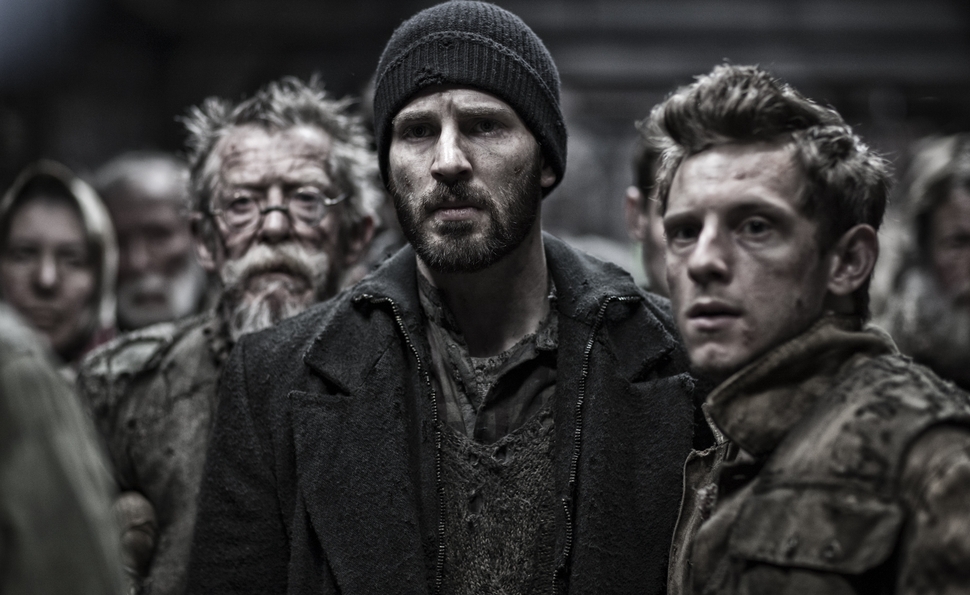 There isn’t a lot of color in the first half of Bong Joon-ho’s Snowpiercer, or in the rear half of the vehicle that gives the film its name. Snowpiercer is a massive train with a route spanning the entirety of a post-apocalyptic, ice-covered Earth. So when a young woman (Emma Levie) in a bright yellow coat appears, it’s clear she’s from one of the cars closer to the engine. Or, as it’s known to those aboard, The Sacred Engine, the miraculous feat of engineering that keeps Snowpiercer moving, sheltering its passengers, and insulating them from a world that would freeze them mere moments after they stepped outside. For some, it provides little more than shelter. The tail-section residents live one atop one other, eating “protein bars” that look like bricks of licorice Jell-O, and existing at the pleasure of the elites, who perpetually remind them of their proper place. Sometimes that place means sacrificing what they love for their so-called betters. The woman in the yellow coat doesn’t depart by herself. After taking a tape measure to the children of the tail-section, she finds two that are the perfect size for some unknown purpose, and leaves with them in tow. It’s another example of a seemingly inflexible system, one in which some have, some have not, and, as the elite minister Mason (Tilda Swinton) reminds them, all must “Keep your place.”

Swinton is barely recognizable in the role. Her performance channels Margaret Thatcher, starting with the teeth, and working out to the misplaced moral surety and almost-tangible absence of compassion. There’s nothing subtle about it, but then there’s nothing subtle about the unapologetically allegorical film, which adapts a pair of graphic novels by French creators Jacques Lob, Jean-Marc Rochette, and Benjamin Legrand. Take away the endless train and the environmental catastrophe, and it’s the divided world Robert Reich has been warning everyone about for years. Wealth and comfort rest in the hands of the few. Toil and insecurity rule everyone else’s lives.

But just because everyone knows their place doesn’t mean they’re happy about it. When officials show up for a headcount, Curtis (Chris Evans) can barely hide his hatred. He’s flanked by Edgar (Jamie Bell), an ever-present sidekick with whom he’s clearly plotting something, though they’re keeping their plans to themselves. Past rebellions have gone poorly, and as they wait instructions from a mysterious contact further up the train, they listen to the counsel of Gilliam (John Hurt), who claims he’s “a shadow of a shadow” of his former self, but still doesn’t lack advice on how to proceed. They have to wait for the right time. Then one day, the right time comes, and they begin a long, dangerous journey forward.

Bong directs the film with a sense of momentum and peril, not all of it physical. He’s best known in the U.S. for his inspired Godzilla riff The Host, but he’s equally adept at tense psychological thrillers like Memories Of Murder and Mother. Here, he keeps pushing his central party forward while making each spot along the way a mystery. En route, the rebels pick up new members like security expert Namgoong Minsoo (Song Kang-ho) and his daughter Yona (Ko Ah-sung), both of whom nurse an addiction to a mysterious drug. They also encounter an aquarium, a schoolroom, and soldiers determined to stop their progress at any cost. (Bong keeps the film unpredictable in part by killing off characters who initially seem likely to go the distance.)

The cars grow cleaner as the rebels move forward, but they also become more grotesque. It’s almost certainly no coincidence that Hurt’s character bears Terry Gilliam’s name; Gilliam’s influence, and Jean-Pierre Jeunet’s, can be felt in the production design, particularly as Curtis and his companions hit the more decadent parts of the train. Bong directs forcefully, but he slows down the pace when it counts, taking time to soak in the details of some areas of the train, and late in the film, giving Curtis a devastating monologue that reveals how he became who he is.

Evans is a revelation here, delivering a haunted performance that his previous work has only suggested he had in him. He gives the film a solid center, allowing others in the cast to explore the extreme. That includes everyone from Swinton to Alison Pill (who makes a memorable appearance as a teacher seemingly unhinged by her belief in the propaganda she uses to indoctrinate her kids) to some terrifyingly unstoppable musclebound villains. They fit into a world driven by rational calculation that’s nevertheless gone mad, a world the film reveals one hard fought-for inch at a time.

Snowpiercer succeeds where last year’s Elysium fell short. Projecting the problems of today into a science-fiction tomorrow, it also ties them to a compelling story that keeps shifting under its characters’ feet. The characters shift in turn, and the finale gives its devil his due by letting Snowpiercer’s mastermind (a bit of casting better left unrevealed) argue the rightness of his decisions. Bong stages the action scenes beautifully, particularly a gunfight that unfolds as the train rounds a curve. Working from a script he co-wrote with Kelly Masterson (Before The Devil Knows You’re Dead), he handles the headier elements just as well, creating a graceful marriage of thoughtfulness, oversized ideas, and cringe-inducing bloodletting. It would have been a shame had Bong not successfully fought against the release of a shorter version. To work, Snowpiercer needs to feel like a journey. In its present form, it’s an exhausting, exhilarating, meaningful trip with many troubling sights along the way, and no easy answers at the end.