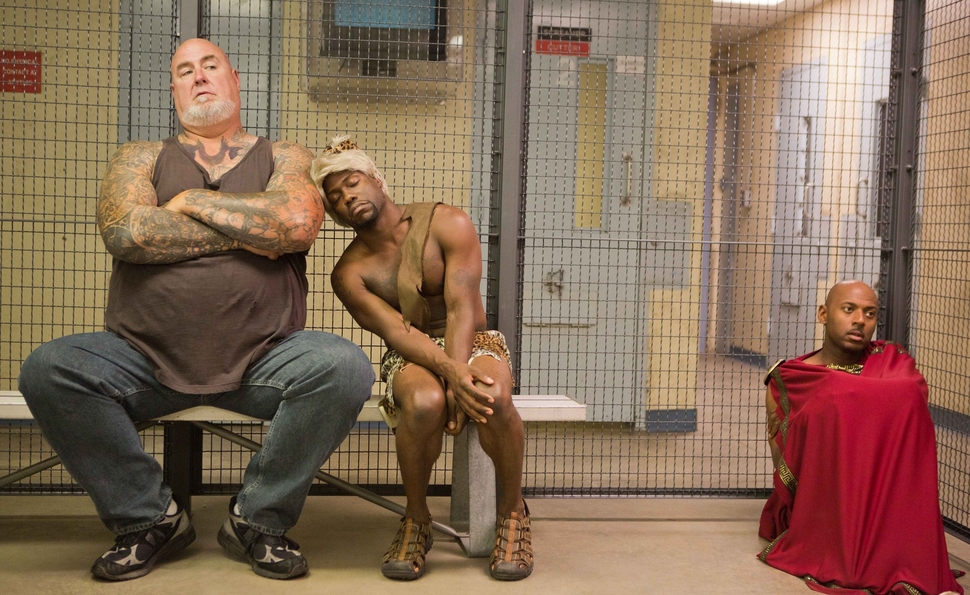 The liveliest moments in Think Like A Man Too, the inessential follow-up to the pointless adaptation of Steve Harvey’s bestselling relationship-advice manual, abandon narrative completely in favor of something approaching total music-video abstraction. In one sequence, Kevin Hart delights in the lushness of his Las Vegas luxury suite by prancing around in his underwear like a deranged, speed-riddled cross between Home Alone’s Kevin McCallister and Risky Business’  Joel Goodsen. In another, the film breaks the fourth wall and abandons the thin pretense of addressing anything approaching reality, so the cast, in a crazy accidental marijuana haze, can perform a version of the early 1990s New Jack Swing classic “Poison” with the lyrics altered to fit the film’s plot. The sequence even ends with MTV-style music-video credits in the bottom left-hand corner, including one for director Tim Story.

These sequences make it apparent that Story, despite his last name, would really rather just be shooting home movies of his attractive friends goofing around. He seems annoyed that he has to tell even the flimsiest wisp of a story. His frustration is understandable. Think Like A Man Too isn’t a movie, or even an arbitrary sequel to an arbitrary adaptation of a novelty book, so much as an extended victory lap from filmmakers and actors convinced that all they have to do is show up to equal or top the first film’s success. The sad thing is that they’re probably right.

Hart, who has rocketed to super-stardom since the first film’s release, stars as the perpetually separated Cedric, and provides wall-to-wall narration to explain a plot that needs no explanation, and barely constitutes a plot in the first place. The premise finds the gang from the first film reuniting in Vegas for the marriage of Candace (Regina Hall) and baby-faced mama’s boy Michael (Terrence Jenkins).

Cedric arrives alone, but the other couples arrive with subplots: one partner’s difficulty dealing with another’s extensive sexual history, another couple experiencing the pressure of trying to conceive. Yet although the franchise—oh dear Lord, this is a franchise now—has its roots in an instructional guide to relationships, Think Like A Man Too has no interest in exploring the complexities of romance. It’s consumed by a desperate hunt for cheap laughs.

The filmmakers simultaneously rip off The Full Monty and every breakdancing exploitation movie of the 1980s by having Cedric accidentally rent a $44,000-a-night room, which the fellows must pay for by entering an amateur stripping competition that just happens to have a $50,000 top prize. Sadly, the men are forced to compete against other amateur strippers rather than a talented troupe of misfit breakdancers out to raise money to save their rec center, but the cheesy, ingratiatingly retro Cannon vibe remains the same.

Hart was Think Like A Man’s sole redeeming facet. Story clearly gave him the same kind of free rein to improvise, steal scenes, and generally hog the spotlight, as with Cedric The Entertainer in Story’s Barbershop. But Hart’s high-intensity, low-yield performance suggests he may have already reached the point of strained self-parody. While his fellow performers are stuck at half-speed, Hart is perpetually in overdrive. His performance is excitable more than anything else, often hysterical to the point of near-incomprehensibility.

Think Like A Man Too is the kind of brazenly silly, preposterous trifle audiences laugh at, rather than with. But at least the film serves notice that Adam Sandler isn’t the only Hollywood superstar who can pass off breezy vacations in scenic locations with his buddies as pointless yet profitable motion-picture vehicles. Hart has apparently reached the point where he can now coast on the audience’s affection for him and his better work, an impressive, regrettable milestone for any actor.

GoWatchIt: Buy. Rent. Stream Think Like A Man Too