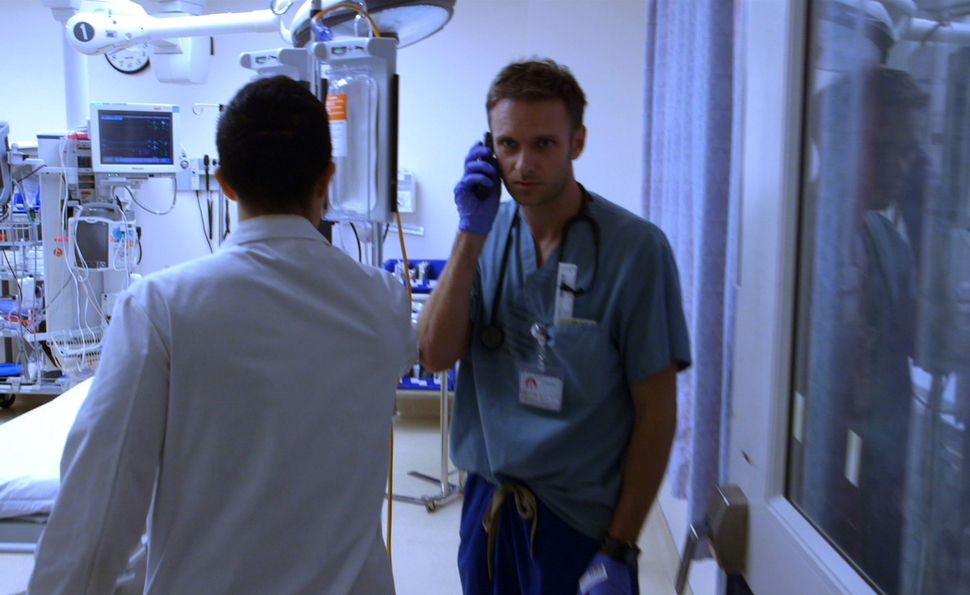 Code Black is set on the proving ground of the social contract: Los Angeles County + USC Medical Center, “the birthplace of emergency medicine in the United States,” as one veteran doctor says, and one of the busiest emergency rooms in the world. Here, as in all county hospitals—and unlike at private hospitals—no one is turned away for their inability to pay for care.

This is where they bring people whose hearts have stopped working, or who are bleeding out. For the uninsured and the working poor, who receive no medical care until their conditions become acute, it’s also the doctor’s office. It’s not unusual for people to spend 18 or 20 hours on a bench or the floor before they’re seen. They wait it out, if they’re sick or injured enough, because they have nowhere else to go.

Director Ryan McGarry, an emergency-room physician, made this ambitious debut feature over the course of five years, including those of his residency, when 80-hour weeks for newly minted M.D.s are standard. Though Code Black runs a mere 82 minutes, it manages to capture the Gordian knot of public medicine in America, circa 2008-2012, in microcosm. It first establishes the extraordinary difficulty, consequence, and excitement of a public E.R. physician’s job, which is as different from general-practice medicine as deadline journalism is from writing a book. Then the film slows down and expands its focus to expose bureaucratic obstacles that sap the time and energy doctors would prefer to spend saving lives.

It’s a lot for a little film by a first-time filmmaker to bite off. (McGarry and his editor, Joshua Altman, share a “written by” credit.) But McGarry makes an asset of his foot-soldier’s view of the war. In fact, the frenzied opening sequence wouldn’t look out of place in a war movie: It depicts a busy night in “C-Booth,” the old L.A. County Hospital’s antiquated 20-by-25-foot trauma bay, where teams of doctors and nurses in bloodstained smocks, masks, and goggles are packed together like rush-hour commuters in a hellish subway car as they hover over the dying, some of whom are also screaming and writhing. When a patient dies on the operating table, viewers can’t discern that patient’s gender, age, or race through the forest of heads surrounding the body. Almost immediately, the swarm of people working to save that person are gone, replaced by a lone janitor, mopping up the blood.

The picture makes a compelling case that the public health system is broken. That’s according to McGarry and half a dozen of his residency classmates and attending physicians, who are mostly young and attractive, and entirely idealistic. He doesn’t seek comment from the private insurance companies and drug makers who insisted during the long public debate over the Affordable Care Act—passed in 2010, and upheld by the Supreme Court in 2012—that the U.S. health-care system is the finest in the world. “Emergency medicine is blue-collar work,” someone says here.

And like most films that (to stick with the war-movie metaphor) follow the rank and file, Code Black is almost apolitical. When McGarry and his classmates complain about the crushing regulatory burden that requires them to spend more time on lawsuit-preventing paperwork than on patient care, they sound like Republicans. When he frames the availability of medical care to everyone as a simple matter of “doing the right thing,” he’s advocating a position considerably to the left of the one President Obama dared to stake out.

Near the end of the film, McGarry speaks to a woman weeping quietly in the waiting room. She’s professionally dressed, Caucasian. She used to have insurance, she says, until an embezzling scheme destroyed her business. Now this 58-year-old attorney lives in her car. It’s a powerful reminder that when the doctors and nurses McGarry profiles interact with people outside their own profession, their patients are often experiencing the worst days of their lives. Code Black doesn’t suggest ways to improve health care in America, but it at least documents one of the most noble and necessary professions with insight and humility.