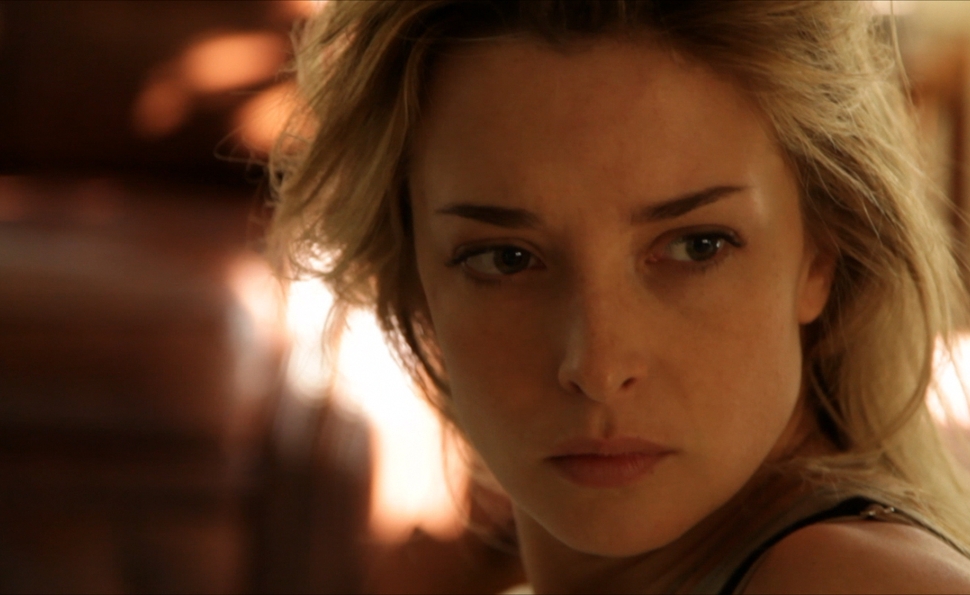 One of the best-remembered episodes of the original Twilight Zone series, “The Monsters Are Due On Maple Street,” depicts a neighborhood block’s gradual descent into chaos when the power mysteriously goes out immediately after an unidentified object is seen flying overhead. In Coherence, an ingenious hybrid of that episode and Shane Carruth’s Primer, the object in question is a comet, seen shedding a brilliant plume of dust and gas as it passes unusually close to Earth. As in “Maple Street,” the lights suddenly go out, and denizens of a suburban block slowly start to turn on each other in their fear and confusion. In this case, however… Well, that’s where things get tricky, because just how many people are on this particular block at this particular moment in time becomes a question that’s nearly impossible to resolve.

Saying much more than that would be criminal, as Coherence is the kind of film in which a lot of the fun derives from watching its characters struggle to make sense of seemingly impossible circumstances. Early scenes introduce eight friends who’ve gathered for a casual dinner party, at which the comet is initially just one topic of conversation. Em (Emily Foxler) is more concerned about the presence of Laurie (Lauren Maher), a “vixen-y” type who used to go out with Em’s boyfriend Kevin (Maury Sterling), while Beth (Elizabeth Gracen) complains about the bad feng shui related to the house’s “door to nowhere,” and actor Mike (Buffy The Vampire Slayer’s Nicholas Brendon) handles the humiliation of not being recognized by a fan of a TV show on which he starred. (Roswell, hilariously—the film invents a leading role for it that didn’t actually exist.) Two people claim the comet somehow cracked the glass on their phones, but spooky stories about previous comets and the Tunguska Event (which actually happened) are mostly laughed off.

Then the power goes out, seemingly everywhere in sight… with the sole exception of a brightly lit house about two blocks away. Hugh (Hugo Armstrong) and Amir (Alex Manugian, who devised the story with first-time writer-director James Ward Byrkit) volunteer to head over there and see if there’s a landline they can use, since nobody’s cell phone is working. The story the guys bring back has the rest of the group convinced that they somehow accidentally walked in a circle, until Mike pries open a small metal box Amir took from the porch of the other house and finds a ping-pong paddle inside, along with an envelope containing photos of the occupants of this house, each with a single-digit number written on the back in what appears to be Em’s handwriting. And while most of the pictures are old, the one of Amir shows him wearing a sweater he’d just bought earlier that day, standing in front of an object in that very house.

Shot over five nights in a single location, and almost entirely improvised, Coherence is no-budget filmmaking at its most delectably inventive. Byrkit’s résumé includes a lot of work in the art department on Gore Verbinski’s films, plus a story credit and voice work on Rango, but there’s no trace of Hollywood in this lean, cerebral puzzler, which trusts viewers to pay close attention to offhand lines and briefly glimpsed objects to piece together what’s happening. (Good luck with that, though. Someone will surely attempt to create a detailed timeline similar to the ones Primer fans have cooked up, but the ratio of speculation to hard evidence here is even more daunting.) Byrkit’s one concession to accessibility is an overly convenient book (actually, handwritten notes in a book) that attempts to ground the film’s fantastic conceit in scientific reality. In that respect, Primer this ain’t, despite the distinct narrative similarity. Schrödinger’s cat gets helpfully explained, and Hugh Everett’s many-worlds interpretation of quantum physics is laid out in everything but name; there’s no attempt to explain how a comet could affect anything, though, so Byrkit might as well have just left the cause of the event mysterious (though the book/notes do serve an additional, non-expository function in the story).

Coherence also lacks Carruth’s visual elegance, no doubt because of its semi-improvised nature. While the on-the-fly compositions are mostly banal, though (and the camera is constantly racking focus), Lance Pereira’s editing is razor-sharp—he’s left virtually all evidence of the actors’ fumbling on the cutting-room floor, creating the illusion of a fully scripted movie in which the dialogue is superbly natural. (He also skillfully punctuates the first act’s cheery banter with repeated jarring cuts to black.) All eight of the actors, including Lorene Scafaria (director of Seeking A Friend For The End Of The World), do solid work, with Foxler making an especially strong impression as the insecure, vaguely dissatisfied Em. Overall, though, Coherence is more intellectual exercise than ensemble piece, with characters who exist primarily to be manipulated by a fiendishly clever puppetmaster named Byrkit.

That’s why it’s so gratifying that the last few minutes of Coherence succeed in accomplishing the one thing Primer could not. Great though Carruth’s movie is, it remains slightly inhuman; the protagonists’ motivation (involving the mostly unseen party they repeatedly attempt to revise) is just an abstraction, never deeply felt. Coherence, on the other hand, provides someone whose extreme actions are painfully relatable. At one point, when everyone’s trying to figure out what the hell is going on, Laurie brings up Sliding Doors, the Gwyneth Paltrow movie about two alternate realities that diverge based on whether the heroine boards or just misses a train. In addition to being exactly the kind of pop-culture reference these characters might actually make in this situation, it’s exceedingly sly, because Sliding Doors—like Krzysztof Kieslowski’s Blind Chance, which it strongly resembles—is about, well, blind chance. Coherence is having none of that. Its anxiety is rooted in the belief that nothing is random, that every decision contributes to a person’s happiness. “I’m not saying no,” Em tells Kevin at the outset, regarding an important life decision that needs to be made sooner rather than later. “If you don’t say yes,” he replies, “it becomes a no.” This film is too complicated to be reduced to an equation that binary, but it recognizes that a person who’s been ruined by ambivalence will seize the opportunity for retroactive resolution. It has a sting in its tail.