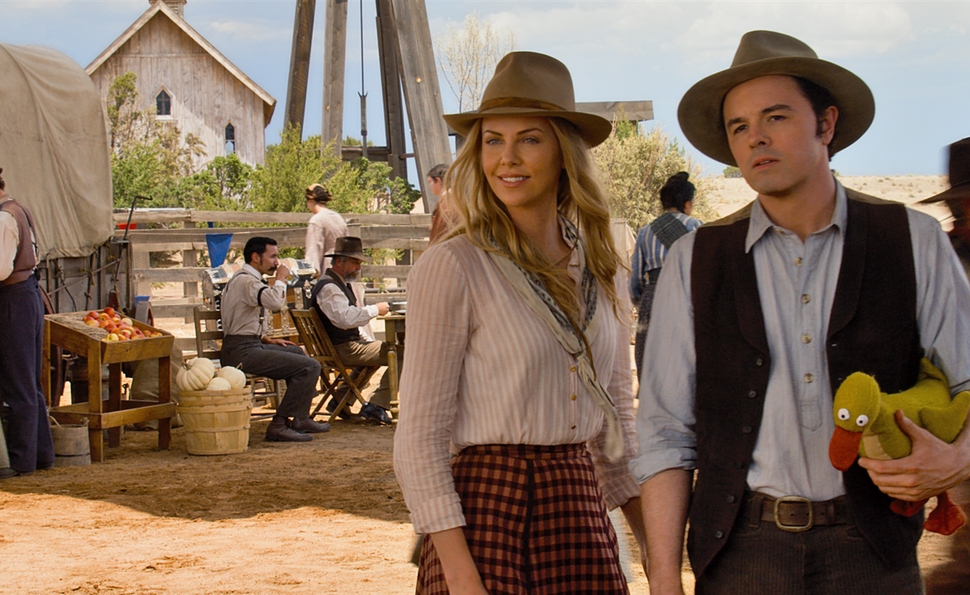 A Million Ways To Die In The West

Seth MacFarlane has been so ubiquitous for so long that it can be difficult to even remember when he wasn’t a huge fixture of American pop culture. Yet it’s still a little jarring watching him star in a live-action movie like his new Western comedy A Million Ways To Die In The West, because his face is so much less recognizable than his voice. Even though he’s logged a fair amount of camera time as the host of awards shows and roasts, it’s still strange seeing a man as famous and successful as MacFarlane make the transition from prolific voice actor to first-time live-action leading man at age 40. It’s a fairly smooth transition, and MacFarlane has a likable presence, but a film as slight and wobbly as A Million Ways To Die In The West would benefit from a stronger center.

Picking up more or less exactly where MacFarlane’s directorial debut, Ted, and his animated series Family Guy left off, A Million Ways To Die In The West casts MacFarlane as Albert Stark, an egregiously incompetent sheep farmer adrift in the Wild West of 1882, which has little use for his effete, cerebral brand of masculinity. His girlfriend Louise (Amanda Seyfried, in a nothing role) dumps Albert for being a meek little nobody, but his luck improves when Anna (Charlize Theron)—a sexy, mysterious stranger handy with a pistol and quick with a one-liner—takes an interest in him and makes it her righteous quest to cheer up this depressed dandy.

Albert doesn’t realize Anna is on the run from her husband, notorious killer Clinch Leatherwood (Liam Neeson). Giovanni Ribisi and Sarah Silverman round out the cast as, respectively, Albert’s virginal best friend Edward and Edward’s fiancée Ruth, a hooker who never loses her sunny innocence or chipper disposition, despite the never-ending stream of humiliations that constitute her profession. Meanwhile, Neil Patrick Harris vamps his way through the role of Foy, the proprietor of a mustache-accessories store, and Louise’s sneering new boyfriend.

Harris’ character is essentially a walking handlebar-mustache joke, but thankfully, it happens to be an inspired walking handlebar-mustache joke, and Harris and MacFarlane’s shared love of musical theater pays off big time in an exuberant production number dedicated to mustaches. Like Ted, A Million Ways To Die In The West has a daft sweetness and underlying whimsy, and MacFarlane and Theron have a nice chemistry, even if it’s a male fantasy that a woman as remarkable as Anna would doggedly pursue the film’s milquetoast lead.

Though amusing throughout, A Million Ways To Die In The West suffers from all Ted’s flaws and lacks many of its virtues. Most alarmingly, MacFarlane’s follow-up feels less like a film than like an extremely long, fairly inspired live-action episode of Family Guy, one that’s only as strong as the latest gag or riff. And this being a Seth MacFarlane production, those gags and riffs are of varying levels of quality.

Also like Ted, A Million Ways To Die falls apart in the third act, and suffers from a villain MacFarlane failed to give any jokes. The film plays Neeson’s revenge plot relatively straight, which wouldn’t be so problematic if MacFarlane had any interest in making a real Western, instead of merely using the Western setting as a framework for gags rooted in the contrast between contemporary sensibilities and the film’s 1882 setting.

A Million Ways To Die In The West is brazenly anachronistic, beginning with a hero who seems like he would be more comfortable making jokes on Twitter than herding sheep. It would be a mistake to call the film a one-joke movie, since the jokes aren’t just rooted in imposing contemporary attitudes on the distant past: There’s also an abundance of mustache-based comedy, and most fruitfully, a rich vein of morbid dark comedy in the film’s notion of the West as a giant death-trap that ensnares much of the population.

As a leading man, MacFarlane neither distinguishes nor embarrasses himself. He has an easy presence that suggests acting in front of the camera comes as easily to him as everything else does. (Creating shows, doing voices, crooning, running a sprawling, multi-tentacled empire while still in his 30s, etc.) Perhaps that’s the problem: MacFarlane is so naturally gifted at delivering glib laughs that he doesn’t really need to try, and A Million Ways To Die In The West would benefit from a lot more effort and a little less of MacFarlane’s cavalier confidence.

GoWatchIt: Buy. Rent. Stream A Million Ways To Die In The West