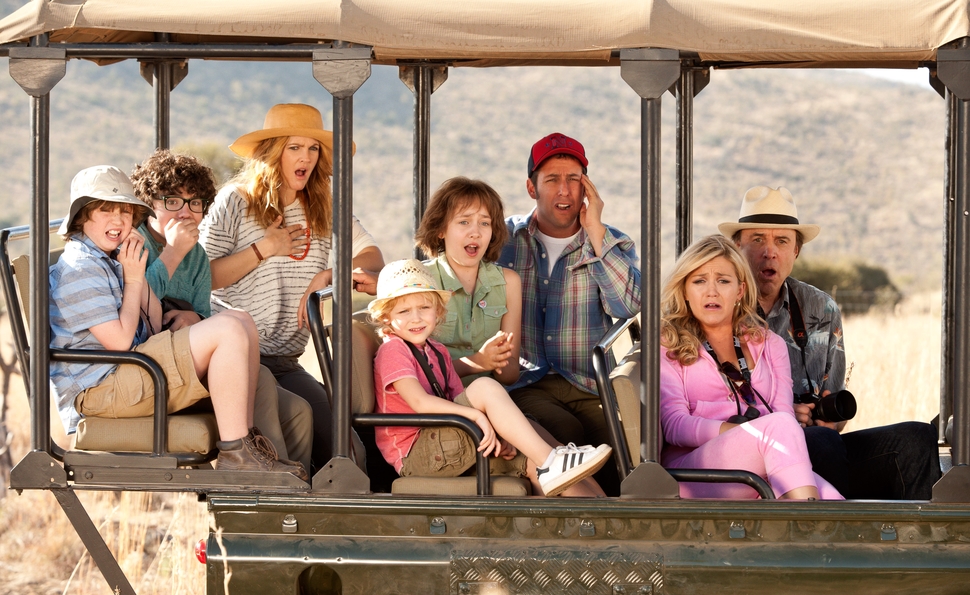 Adam Sandler has loudly, obnoxiously evolved into one of the most consistent performers alive, in that his films consistently beg to be considered when the worst films of any specific year are tallied. Recent Sandler vehicles like Jack And Jill, That’s My Boy, Grown Ups, and Grown Ups 2 broadcast their awfulness with titles, premises, and posters that serve as chilling portents of terribleness to come. Even before afflicting theaters, they loom malevolently in the culture, serving as a dispiriting reminder of the low, low standards of the general public.

It’s almost as if Sandler and his Happy Madison production company are baiting viewers, engaging them in a sadistic, decades-long thought experiment to see how many repellent films he can make before they turn on him. But the upside to Sandler’s movies over the past five years is that they set the bar so low, mediocre vehicles can soar right over them.

Accordingly, Blended, Sandler’s third collaboration with Drew Barrymore—after The Wedding Singer and 50 First Dates—sets itself apart from the Happy Madison honcho’s recent work by virtue of not being egregiously terrible from start to finish. It does get off to a rough start, though. Tapping into the sad-sack side of his persona, Sandler plays Jim Friedman, an everyday guy who's put all his time and energy into raising his daughters after their saintly mother died. Jim is a kind, decent man, a consummate mensch, but he does a bang-up impersonation of an ignorant jackass when he goes on a blind date at Hooters with Lauren Reynolds (Barrymore), a neurotic single mother raising a pair of difficult boys without much help from their smarmy jackass father Mark (Joel McHale, who is cornering the market on Craig Kilborn types).

Jim and Lauren have everything in common—white mini-vans, single parenthood, fundamental decency—but they can’t stop insulting each other in ways that make them seem nastier and worse than they actually are. Despite their disastrous introduction, they keep bumping into each other. And due to circumstances far too convoluted to dignify with an explanation, they end up vacationing together in South Africa’s Sun City, a hotbed of controversy during the height of apartheid. (The place even inspired a protest song.)

Jim’s cruelty to Lauren is even more puzzling considering what a kindly, adoring father he is to his sensitive young daughters, one of whom has adopted her dead mother—who is referenced so often, she almost qualifies as a main character—as an ever-present invisible friend. Lauren, played with a winning combination of child-like daftness and inner strength by Barrymore, is equally lovable and charming, except when she’s dealing with Jim throughout the film’s rocky first hour.

As the dead-mother/invisible-friend business suggests, Blended is unabashed in its sticky sentimentality. It’s a heart-tugger so shameless that it even creates a romantic, borderline-heroic rationale for a man to take a woman on a first date to Hooters: Jim’s late wife was a longtime employee there. But as with 2004’s 50 First Dates, Sandler and Barrymore’s previous collaboration, the syrup goes down easy thanks to the innate likability of its leads. Also like 50 First Dates, Blended works so much better as  romance than comedy that it almost seems a shame the film even angles for laughs at all.

Sandler brings a real sense of grief to the role that grounds the drama. Playing a widower rather than his usual stunted man-child brings out his sadness and vulnerability, and his scenes with his daughters have a disarming tenderness. For a rom-com, Blended has a perverse absence of conflict. It presents two people who would clearly be perfect for each other if they could only get out of their own way, then sends them on the most romantic, ideal vacation imaginable—via a package specifically designed for blended families, no less. In a desperate bid to create conflict where none is necessary, the film has Lauren’s smarmy ex pop up out of the blue to provide one last artificial barrier to happiness, in a sequence apparently designed to pad the running time of a film that already feels way too long.

Blended is never actually funny; the closest it comes to generating laughter is Terry Crews’ demented performance as the lead entertainer at Sun City, a well-muscled goofball whose shtick is part Michael Jackson, part Ladysmith Black Mambazo, and all Terry Crews scene-stealer. Yet thanks to Sandler, Barrymore, and South Africa’s natural beauty, Blended is far more palatable and bearable than it has any right to be; it’s fluff that rises to the level of innocuous disposability. For a man whose post-Funny People vehicles instantly announce themselves as contenders for the worst of the worst, that’s an achievement tantamount to sweeping the Academy Awards.