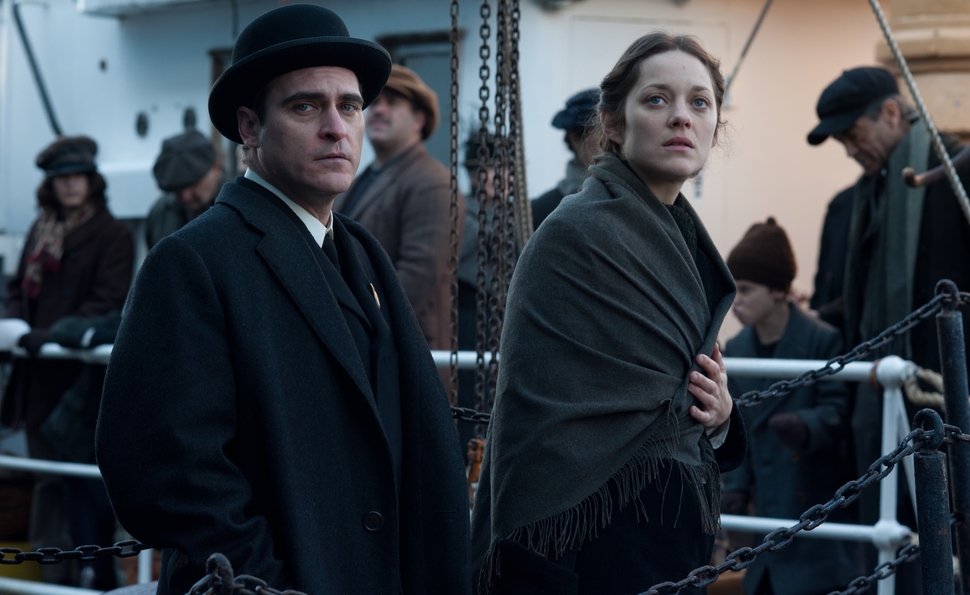 The Ellis Island of James Gray’s The Immigrant is part purgatory, part cattle run. There, human beings, wrung out from their terrible journey across the Atlantic, are assessed with the indifference accorded to steer in a pen. The Statue Of Liberty promises one thing, but no one in this film is excited to shuffle the tired, poor, huddled masses through the weigh station to the American Dream. When Polish immigrants Ewa (Marion Cotillard) and her sister Magda (Angela Sarafyan) take their place in line in 1921, nobody cares that they’ve fled the Great War after losing their parents, or that they’ve just stepped off a ship plagued by disease and starvation. A doctor sends Magda, pale from tuberculosis, to the infirmary indefinitely, with the likelihood that she’ll be deported as soon as she’s released. And because Ewa’s aunt and uncle haven’t come to claim them as expected, she can’t leave the island, either, since female immigrants aren’t allowed to enter the mainland unaccompanied. Just like that, a family is split and dreams are dashed. And it’s on to the next one in line.

The immigrant experience has been on Gray’s mind since his 1994 debut feature Little Odessa, a crime picture set in the Russian enclave of Brighton Beach, but The Immigrant is more in line with sweeping iconography of America, America, or the early scenes in The Godfather Part II. The scale seems every bit as large, yet the film’s intimacy is profound: Ewa may represent the best of America—integrity, dignity, resilience, devotion—but hers is a story of particulars, not generalities, and Gray works hard to ensure that nothing conforms to type. Like Little Odessa, The Immigrant operates largely outside the bounds of American society, a shadow world of criminals and misfits where power and order are dictated by unofficial, illegitimate, and often ruthless means. Using just a few key locations—which only strengthen the sense of cloistered suffocation—Gray evokes this country-within-a-country with an exceptional sense of its rituals and ethnic distinctions. Outside the great melting pot, it gets a little lumpy.

While Magda’s illness keeps Ewa at Ellis Island, she faces deportation, too, for reports from the ship that she’s a woman of low morals. Salvation comes in the volatile form of Bruno (Joaquin Phoenix), who spots her in line and arranges to have her snuck out of Ellis Island, with the promise that they’ll come back to get Magda later. As it happens, Bruno is a part-time pimp who manages a burlesque house full of attractive, desperate women like Ewa who have no money, no papers, and only their bodies as currency. (The burlesque stage show consists of exotic women of various nationalities trotted out in costume; Ewa, in perhaps too fine an ironic point, is cast as Lady Liberty.) But Bruno has trouble controlling Ewa, partly because he’s bewitched by her, and partly because she defiantly isn’t a woman of low morals. When a second man, a worldly magician played by Jeremy Renner, enters the picture, an already-tense situation becomes explosive.

As Ewa, Cotillard initially seems cast in the role of noble sufferer, doomed to absorb all manner of abuse and degradation on her sister’s behalf. But Gray has written her as the opposite of a Lars von Trier heroine, someone who keeps asserting her dignity and strength in the absence of any leverage. She depends on Bruno for money, shelter, and his vague promise of paying for her sister’s freedom, but she doesn’t comply meekly to exotic dancing and prostitution, and her shame spreads to his conscience like an infection. In his fourth role for Gray (after The Yards, We Own The Night, and Two Lovers), Phoenix exposes the terrible conflict within Bruno, who’s in the business of exploiting women like Ewa, but can’t temper his feelings for her, or muzzle his pathological jealousy. Gray puts their relationship on a long fuse, but it pays off in scenes of startling, gut-wrenching emotion, as both reveal the profound depths to which they’ve affected each other.

Gray does many small things to bring the era to life—the burlesque routines and magic shows alone are a marvel of period fetishism—and The Immigrant does more than enough to justify its title, which suggests that Ewa’s story is one of many tales of woe a first-generation American might tell. But what really sets The Immigrant apart is how urgent it feels. Historical dramas often have a reserve that comes with perspective, but nearly a full century removed from this story, Gray seems, if anything, more emotionally invested here than in his contemporary dramas. Stories like Ewa’s are the foundation of the American family, reverberating through the generations that follow. Gray ensures those echoes are heard loudly.