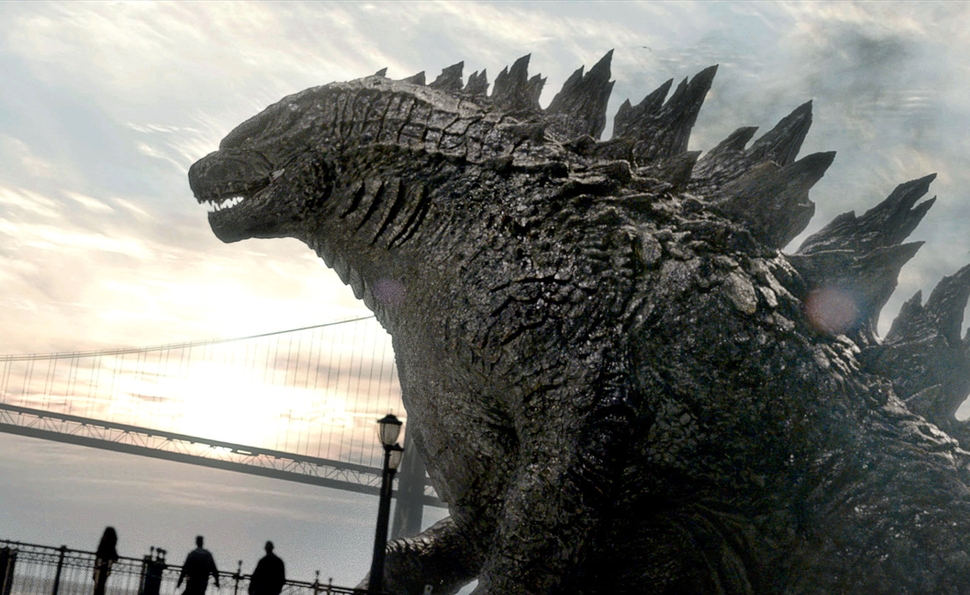 Godzilla turns 60 this year, but he hasn’t been in great health for a while. In fact, little has been seen of the giant lizard since Toho announced a 10-year hiatus following the release of 2004’s Godzilla: Final Wars. That film featured Godzilla doing short, decisive battle with “Zilla,” a dead ringer for the Godzilla from 1998’s much-ballyhooed, little-loved Hollywood version of Godzilla, directed by Roland Emmerich and co-written by Emmerich and his former producing partner, Dean Devlin. But despite that parting single-finger salute, there was little denying the damage the American Godzilla did to the original’s rep. A break seemed like a good idea. Now that break is over.

Godzilla—directed by Gareth Edwards, best known for his low-budget, Godzilla-inspired debut Monsters—is a second attempt at an American-originated version of the creature born of post-war Japanese nuclear anxieties, and it’s an improvement in every way over the last. But it isn’t completely removed from what Emmerich and Devlin were doing, either. Where the 1998 Godzilla borrowed heavily (and clumsily) from Jurassic Park, particularly in its middle act, Edwards occasionally looks back to the Spielberg of Close Encounters Of The Third Kind, with a particular fondness for slow camera movements that reveal first a little, then a lot of an awe-inspiring spectacle. The 1998 Godzilla featured an abundance of big-name actors playing thin characters defined by outsized personalities; the 2014 version features an abundance of big-name actors playing thin characters with as much distinction as their underwritten parts allow. Emmerich’s version all but abandoned attempts to turns its monster into a metaphor; Edwards’ offers echoes of the Fukushima nuclear disaster and vague references to climate change, but it quickly lets them fade. It often feels like Edwards filmed a screenplay a draft or two removed from one that tried to say something, which is surprising, since the political subtext often threatened to swallow Monsters.

Yet for all those worrisome similarities, this new Godzilla is an altogether more satisfying monster movie that delivers when it counts. That’s mostly thanks to Edwards’ mastery of pace and suggestion, and his ability to convey a sense of enormity. The film elides over what would be setpieces in other films, sometimes showing only the beginning of a major confrontation, then letting bits of news footage fill in the blanks. Consequently, Godzilla builds and builds to a climax that feels truly climactic. Though not a found-footage movie, it borrows well from that subgenre’s strengths. When not offering eerie, slowly revealed vistas, or a God’s-eye view of the action, Edwards uses handheld immersion to stay close to those affected by the sudden arrival of giant monsters. That choice lets viewers see them as the characters do: a little bit at a time in the darkness, in pieces through windows, or in one memorable shot, from behind a pair of beating windshield wipers. At one point, a group of characters parachute into the action, and the camera moves with them, floating past the image of a reptilian eye staring at them through the ochre-tinged smoke, without a hint of pity.

There’s a problem with that last moment, though—one that speaks to a bigger problem with the movie. Alexandre Desplat wrote a rousing score for this Godzilla, but the parachute scene instead brings in György Ligeti’s “Requiem,” best known as the trippy music that plays after Keir Dullea heads into the monolith at the end of 2001: A Space Odyssey. It’s borrowed seriousness. So is the cast: Elizabeth Olsen, Ken Watanabe, Sally Hawkins, and Juliette Binoche are distinctive, but aren’t given much to do. Bryan Cranston fares better as Joe Brody, a nuclear physicist who, as the film opens in 1999, plans to warn the Japanese nuclear plant that employs him of some troubling patterns that might prove dangerous. He’s soon proven right, and as the action picks up in the present day, he’s become a one-man X-Files investigator, concerned with the secret truth behind the incident that turned his former place of employment, and the town around it, into a modern ruin. Meanwhile, his son Ford has grown up to become a soldier with an expertise in defusing bombs, though one eager to resume a quiet, normal life with his wife Elle (Olsen) and child in San Francisco. Then disaster strikes again.

In time, however, the seriousness proves to be something of a smokescreen. It’s no longer a secret that Godzilla isn’t the only giant monster in Godzilla. It’s still surprising, however, when Godzilla reveals itself less as a remake of the original 1954 Godzilla than as a homage to one of the series’ later entries, where Godzilla takes on even nastier, more destructive creatures. Edwards’ film doesn’t care much about metaphorical resonance, and cares even less about its human characters, many of which get forgotten for long stretches of the film. But Godzilla has a way with a disaster setpiece, and it cares a lot about providing awesome monster-on-monster action on a mammoth scale. In the service of those, Edwards provides one jaw-dropping image after another, most of them accompanied by a haze of destruction and a pounding sound design, but also a deeply skilled sense of how to construct a scene for maximum impact without overloading an audience’s senses. Beyond that, there’s not much to this new incarnation of Godzilla. But what is there leaves a deep impression, and sounds a mighty roar.