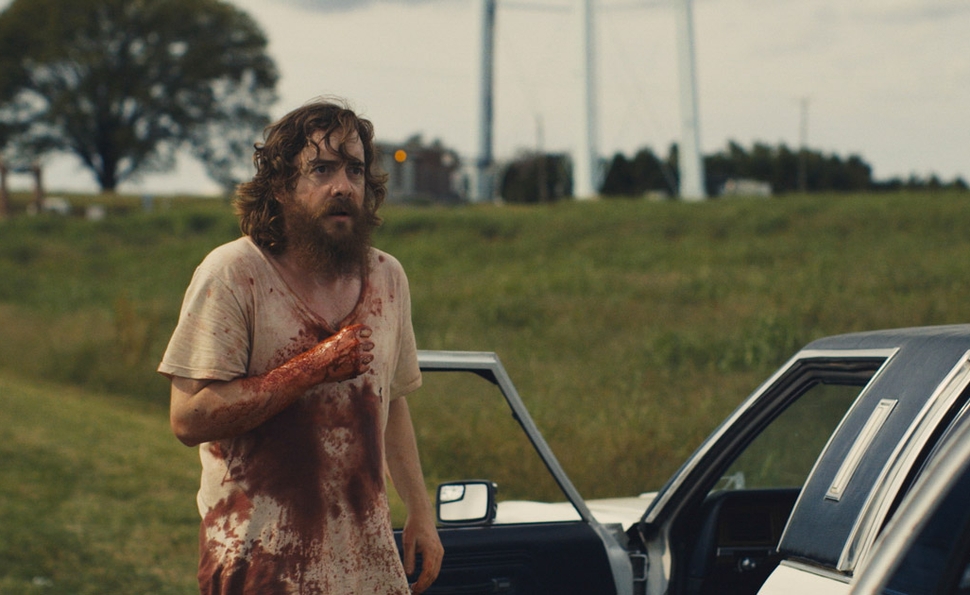 In perhaps the defining sequence of their first feature, Blood Simple, the Coen brothers show how difficult it is to mop up a pool of blood off the floor. There’s a metaphor here about crime and guilt and sins that cannot be scrubbed away, but the literal interpretation is important, too: Murder is not a business for amateurs. Bearing a strong Coens influence—and technical chops nearly sharp enough to match—Jeremy Saulnier’s tense, darkly comic Blue Ruin builds an entire movie around that basic tenet, a revenge thriller about a man woefully ill-suited to exacting revenge. It’s a type of story that’s been told before, but Saulnier makes the crucial decision not to turn Blue Ruin into an out-and-out farce about criminal incompetence; instead, the film’s hero is occasionally resourceful, occasionally inept, and at all times out of his depth. His mistakes may be funny or devastating or both, but his ordinariness is ever apparent.

Introduced in a ragged beard, sneaking in a bath at an unoccupied residence before slipping out the window, Dwight (Macon Blair) lives as a vagrant in Rehoboth Beach, Delaware, picking edibles (and Funland tickets) out of the Dumpster while bunking in the backseat of an old Pontiac. A police officer summons him with a piece of news: Will Cleland, the man responsible for killing his parents in rural Virginia, has been scheduled for release after a plea bargain. Dwight quietly resolves to seek justice for the murders himself, but he lacks the resources and the tools, much less the experience and know-how, to get the job done. He also doesn’t have an end game in mind: Killing Will Cleland may be an eye-for-an-eye situation for him, but not necessarily for the Cleland family. Once the cycle of revenge gets started, it’s not so easy to throw on the brakes.

Dwight may lack foresight, but the key to Blue Ruin is that he’s not dumb, just a weak, desperate man who’s scrapping his way through a narrow set of options. Ideally, he needs a gun for the job, but he doesn’t have the money to buy one from a pawn shop. He successfully steals a handgun from the cab of a pickup truck, but he doesn’t have the key to unlock the chamber, and his attempt to break the lock goes hilariously awry. That leaves an ordinary steak knife, which changes the nature of the crime dramatically. Blue Ruin stays right by Dwight’s side and turns on the consequences of whatever decision he happens to be making at the moment; the rationale for his short-term actions is clear even as the long-term blowback for them lags tragically behind.

Saulnier invests Blue Ruin with wonderful character moments, like a reunion between Dwight and his sister (Amy Hargreaves) that’s like You Can Count On Me in miniature: two long-separated siblings meeting again under a cloud of disappointment and duress. Though the film more than fulfills its genre requirements as a tense, diamond-sharp 90-minute thriller, Saulnier never lets the action get cartoonish, or detached from the flawed characters perpetuating it. Much of the credit for that belongs to Blair’s performance as Dwight: Once he loses the beard and puts on an oversized dress shirt, Dwight stops looking like a streetwise vagrant and looks almost poignantly out of his element, too sad and angry to stop himself from making mistakes that a stronger person would have the discipline to avoid. Like Blood Simple, Blue Ruin deals in crimes of passion, carried out by human beings who are flawed yet tragically relatable. One is about mopping up the blood, the other about the impossibility of stanching the flow.