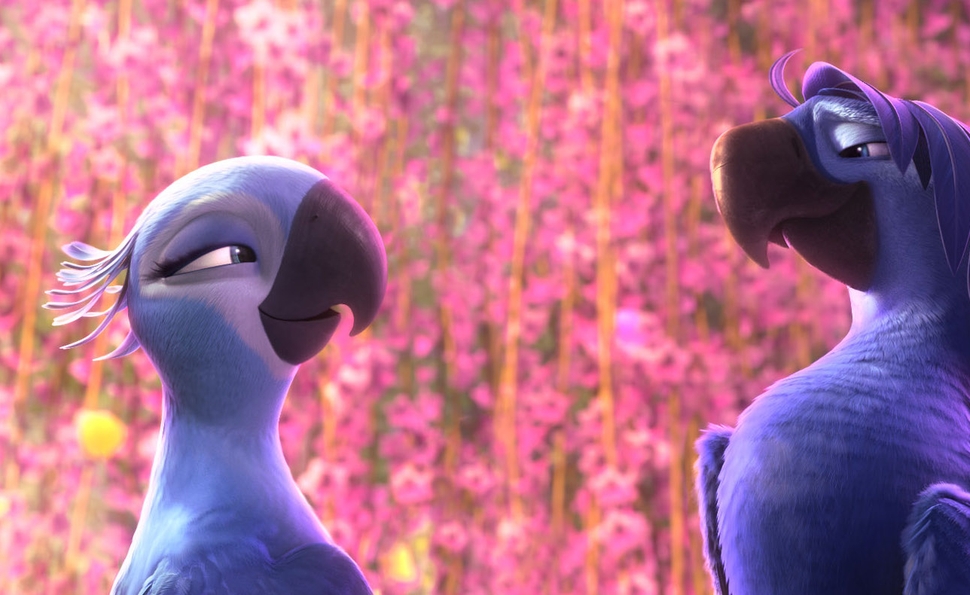 Although Blue Sky Studios has made billions for its parent company, 20th Century Fox, since transitioning into feature animation with 2002’s Ice Age, it’s never become a household name like Pixar. (The worst performer in the company’s history, 2005’s Robots, still posted more than $260 million at the box office.) There’s a reason: Blue Sky products are the cinematic equivalent of the sad, greasy sacks dispensed at a fast-food drive-thru, which minivans keep lining up for because fast food fills the stomach, and at least it doesn’t taste too funky. Overly bright animation, an endless roster of celebrity voices, wisecracking animals (or robots) with the crises of middle-aged adults, maybe a splashy production number or two—that’s the Ice Age formula, and though 2013’s Epic tried to depart from it, Blue Sky otherwise seems intent on taking it to the bank every time.

Picking up where the first Rio left off—$485 million worldwide, and with two happy birdies in Brazil who really didn’t need to go on any further adventures—Rio 2 finds Blu (Jesse Eisenberg), the endangered Spix’s macaw from the first film, still neurotic and domesticated, despite the long journey from America to Rio de Janeiro to mate and help repopulate the species. (A family-friendly animated film built around bird-fucking? Maybe Blue Sky is more cutting-edge than it seems.) Blu and Jewel (Anne Hathaway) have succeeded thrice in their repopulation efforts—if the beaks are a-rappin’, don’t come a-tappin’—but there’s evidence that other blue macaws are flapping around the Amazon rainforest. While Blu’s former human owner, Linda (Leslie Mann), and her ornithologist husband, Tulio (Rodrigo Santoro), work against loggers to find the birds and lobby for a sanctuary, Blu and his family leave their Rio home to find others of their kind.

But wait, there’s more! A deranged cockatoo named Nigel (Jemaine Clement) and his poisonous frog sidekick Gabi (Kristin Chenoweth) are pursuing Blu on a murderous vendetta. And when Jewel reunites with her stern father, Eduardo (Andy Garcia), the old man doesn’t take kindly to Blu’s eccentricities. Will.i.am turns up as a rapping cardinal, and gets some musical support from Bruno Mars and Jamie Foxx—introducing yet another subplot about scouting fresh talent for Carnival—and Tracy Morgan’s drooling bulldog gets shoehorned in there, too, even though he can’t fly to the jungle. There are also big star turns from every color of the rainbow, each amplified to move as many HDTVs off the sales floor as possible.

Amid all the excess busyness, there are formulas within formulas: Blu traveling from Rio to the jungle, fanny pack around his bird-waist and GPS in his claws, essentially repeats the first movie in its journey from domestication to the wild. Blu getting put through the paces by his disapproving father-in-law is Meet The Parents redux. And a big midair “soccer” match between the macaws and a rival species is a Quidditch match without broomsticks. When all parties come together for the big musical numbers—the soundtrack is surprisingly diverse and catchy—Rio 2 rounds up these disparate elements and turns them into a pleasing chorus. But the grab bag of subplots and celebrity voices are otherwise jammed into a sequel that rushes breathlessly to accommodate them all. It takes a lot of effort to give people exactly what they expect.