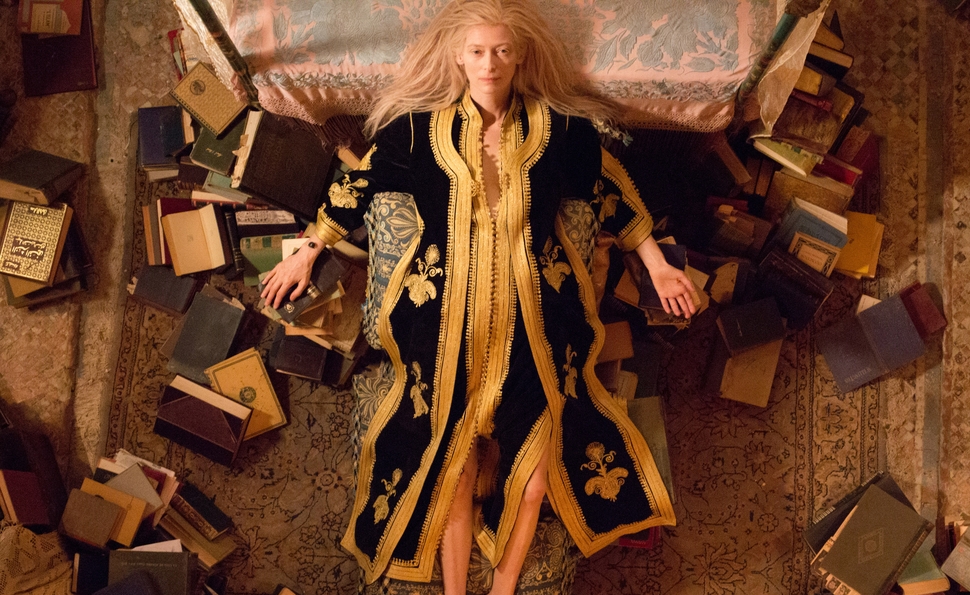 The brilliance of Jim Jarmusch’s Only Lovers Left Alive lies in what it doesn’t do, as much as what it does. In a marketplace flush with vampire movies, Jarmusch isn’t interested in supernatural horror, romantic mythology, or eternal love as the ultimate expression of teenage infatuation. Though the film manifests a deep undercurrent of feeling in subtle, surprising ways, it isn’t florid in its emotions or its violence, and the ambience is thick with ennui more than mortal threat. What primarily interests Jarmusch about vampires is the basic fact that they’ve been around so long: Over ageless centuries, they’ve gained wisdom and perspective on history, literature, and culture that ordinary humans can’t by nature achieve. They’ve also developed the odd habits and obsessions of people who have lived on their own for a long time, like college townies who haven’t gotten out of the habit of pulling all-nighters and sleeping the day away. Only Lovers Left Alive accomplishes the neat trick of reinventing a moribund genre as a distinctly Jarmuschian hangout movie.

Through Adam and Eve, the ironically named vampires played by Tom Hiddleston and Tilda Swinton, Jarmusch channels the weariness of adults who have seen it all, but feel woefully out of touch with the modern world. They are literally creatures of habit: Adam, with the assistance of his young, eager lackey Ian (Anton Yelchin), collects vintage electric guitars and recording equipment, cuts experimental records, and fiddles with Tesla-inspired technology and alchemy. Eve, for her part, pursues a voracious appetite for literature and spends time with the vampire Christopher Marlowe (John Hurt), who actually did write Shakespeare’s plays. Adam lives in Detroit, Eve in Tangiers, so they communicate mostly by phone, but Eve bridges the distance when her sister Ava (Mia Wasikowska) arrives in Detroit from Los Angeles and brings chaos and savagery along with her.

Ava’s late arrival presses the film into action, but Only Lovers Left Alive excels mainly as a vampire slice of life, functioning beautifully as both an inventory of Jarmusch’s literary, philosophical, and musical interests, and a larger comment on the follies of human existence. Details like how Adam and Eve get their blood—from hospitals, rather than living hosts—are pursued as matter-of-factly as the question of where junkies get their supply, and their strung-out ecstasy in consuming it recalls The Velvet Underground’s “Heroin.” Jarmusch draws all the atmosphere he can from the industrial wasteland of Detroit and the exotic streets and cafés in Tangiers, and generally commits himself foremost to the shape of these vampires’ lives more than the direction. Until Ava shows up, there seems to be no obvious reason why Only Lovers Left Alive should go anywhere at all.

But go it does, to a point in time when even immortal beings like Adam and Eve are facing obsolescence and death. Jarmusch’s best film since 1996’s Dead Man, Only Lovers Left Alive shows a similar flair for reinventing genres on his singular terms, but it’s also unmistakably the work of an aging iconoclast who’s clinging to his tastes and his way of doing things, and channeling a certain degree of generational resentment in the process. Jarmusch and his vampires are in the contradictory spot of knowing a lot about the world, yet finding it estranging and incomprehensible. Yet the film has a coarse romantic spirit that emerges from the darkness anyway, tied to a central relationship that’s so familiar and long-lasting that little needs to be articulated. When love is eternal, passion fades into a more permanent and sustaining lifeblood.