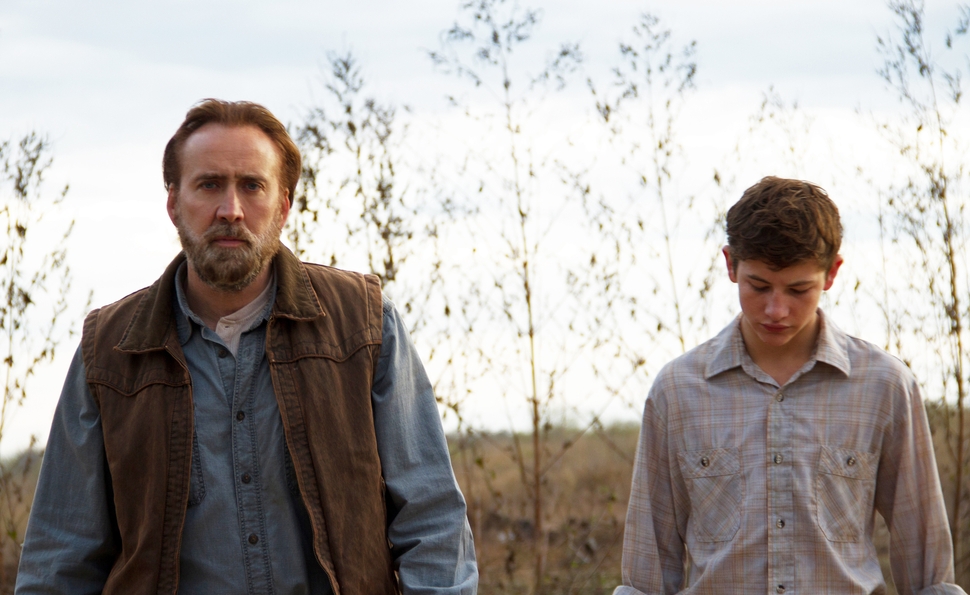 When indie darling turned critical punching bag turned indie darling David Gordon Green started directing lowbrow studio comedies, beginning with 2008’s Pineapple Express, it wasn’t as unexpected as it might have seemed, given the streak of playfulness running through even Green’s acclaimed, artsier early films. That liberating, childlike sense of joy is even more pronounced and essential in his new film Joe, since it comes amid bleak, eviscerating Old Testament darkness. Like its indelibly crafted title character, Joe is paradoxically brutal yet tender, populated by hard men who wear the scars of difficult lives inside and out; their souls are tattooed along with their bodies. Yet even characters who realize their tremendous capacity for evil are also capable of light. Without the levity, the film might be unbearably grim, a stormy exercise in Southern gothic.

Adapted from Larry Brown’s novel, Joe casts a resurgent Nicolas Cage as the title character, a hard-drinking, hard-living ex-convict who spends his days poisoning trees marked for clearing with a motley crew of employees, and his nights poisoning his body with whiskey and trying to numb his pain with booze and whores. Joe is a good man forever on guard against his darkest impulses; scattered bits of his backstory emerge in the screenplay, but it’s a testament to the fiery conviction of Cage’s performance that the exposition is unnecessary. The pain in Cage’s eyes and the suppressed rage in his body language says all that needs to be said about the places the character has been and the ugliness he’s seen. Cage gives the character the world-weariness of a man exhausted from decades of having to police his worst tendencies, and subconsciously looking for an excuse to give up the fight altogether.

Tye Sheridan, who recently visited this gloomy territory in the simpatico Mud, costars as the hardscrabble Gary, who’s learned from experience not to expect anything from anyone. Gary’s made it to age 15 without experiencing childhood; instead, he’s lived through a dire pre-adulthood in which every waking moment is consumed by a desperate hunt for survival. So when Joe takes a shine to the earnest young man and offers him a job, some money, and friendship, Gary is overjoyed. Joe becomes a father figure to Gary, but neither man can escape the specter of violence, internal or external: Joe is understandably as concerned with the suffering he’ll cause while trying to protect Gary as he is with the enemies out to destroy him and all he holds dear, including his worshipful young protégé.

Joe specializes in atmosphere, both of the looming-dread and the local-color variety. The many sequences involving Joe’s largely African-American crew of tree-poisoners don’t push the plot forward, but they do help flesh out the world these characters inhabit, a universe that feels lived-in and realized down to the tiny details.

Joe takes its time. It’s a leisurely paced film of indelible moments that builds to a bleak reckoning in which Joe’s paranoia is vividly realized. It comes with an element of inevitability, but that doesn’t keep the film from feeling electric and alive from moment to moment. As Joe says, in a monologue that serves as a potent reminder of what a great actor Cage can be, he understands he’s speeding toward an endgame. Yet Joe’s brilliance doesn’t lie in its destination, but in the gripping, intense, surprisingly joyous and funny journey it takes to get there.