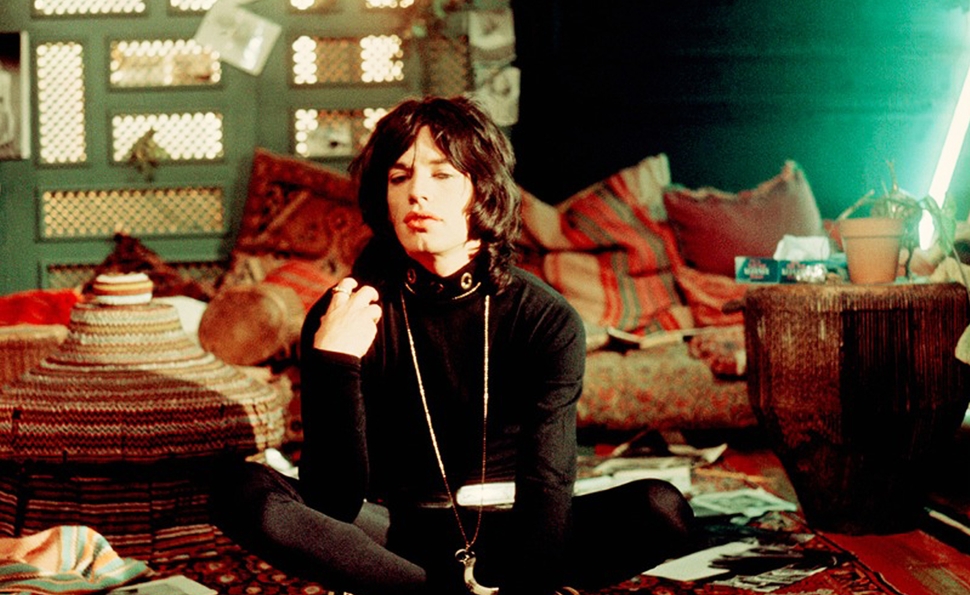 Performance is a film divided down the middle, but not neatly. Co-directed by Donald Cammell and Nicolas Roeg—the latter then a top-rank cinematographer making his directorial debut—it begins as a nasty slice of British underworld life, and ends as a psychedelic excursion into insanity. But Performance’s two sections have a way of invading each other, as befits a film with two central characters whose odd convergence climaxes in an ending that resists any attempt to make literal sense of it, if it allows any kind of interpretation at all. In the opening stretch, Chas (James Fox), a London gangster unafraid of dirtying his hands, runs afoul of his boss and is forced to go on the lam, while the film offers occasional, unexplained flashes of the film’s other protagonist, Turner (Mick Jagger), a retired rock star living in a cluttered home. But even without the mysterious parallels, Roeg and Cammell’s mix of jarring, unconventional editing, sweaty close-ups, and opaque storytelling would still give the film an experimental edge. Later, once Chas takes shelter in Turner’s home, posing as a professional juggler, the threat of his gangland past keeps resurfacing, lending a sense of urgency and dread to the sex, drugs, and other counterculture excesses that overtake his life under Turner’s watch. He can hide, he can even step out of his head, but escape is another matter.

The film deals in sensory overload from the start, whether it’s finding rhyming cuts between Chas’ street-level enforcement of his boss’ interests and legal proceedings addressing the same matter, or lingering on the ugly details of gangster life as Chas and his underlings threaten and humiliate a chauffeur while pouring powerful acid on a Rolls Royce. It intensifies those methods once Chas goes underground, becoming a source of amusement for Turner and his German girlfriend Pherber (Anita Pallenberg, at the time the lover of Jagger’s bandmate Keith Richards). The camera practically becomes a fourth participant in a ménage à trois between Turner, Pherber, and Lucy (Michele Breton), a French teenager also living in their home. In later scenes, the notion of reality starts to slip, then drop away entirely in a musical interlude that finds Turner dressed as Chas, singing to Chas’ criminal partners, a performance of “Memo From Turner” that the film treats as an act of violence.

Jagger was at the height of his rock-star-as-androgynous-theosophist-shaman phase when he appeared in Performance, and the film uses that persona to its fullest, just as Roeg’s The Man Who Fell To Earth drew on David Bowie’s rock-star-as-alien image a few years later. Even before Jagger shows up and starts quoting Hassan-i Sabbah, the end-of-the-decade spirit the Rolling Stones captured so brilliantly on albums like Beggars Banquet and Let It Bleed permeates the film: part druggy exhaustion, part determination to push the limits of experience until revelation comes.

For all its hallucinatory excesses, however, Performance is a film of ideas, even if it’s happier to let them swirl around than attempt to explain them. True to its title, it considers the notion of performance, suggesting that Chas’ threats are as much an act of role-playing as anything Turner does while onstage. Or did, anyway: Why Turner retreated from his own career as a performer remains one of the film’s many unanswered questions, though one that doesn’t feel out of place in a film with more loose ends than knotted strands. There’s much to puzzle over—and the prominent references to Jorge Luis Borges make for a good starting point for that puzzling—but ultimately, the film’s sensual qualities overwhelm its headier aspects. Roeg, who gets a “photographed by” credit, keeps finding one remarkable image after another—a close-up of a tongue exploring lips, disorienting images of bodies in mirrors, neglected gardens—many of them complemented by an experimental score from Jack Nitzsche, all of them serving a sense that Cammell and Roeg have discovered territory that few previously dared to tread. “The only performance that makes it,” Turner says at one point, “that makes it all the way, is the one that achieves madness. Am I right? Eh?” Chas has no answer, but the film around him suggests Turner might be on to something.

This new Blu-ray from Warner Archive ports over a trailer and a pair of features from the 2007 DVD release. They’re good ones, though. A promotional piece precedes an isolated performance of “Memo From Turner” with corny narration. (“Jagger makes great use of a unique device called a Moog Synthesizer…”) “Influence And Controversy,” despite its specific name, is a short-but-solid making-of doc that talks to Pallenberg and others who were there, while shedding some light on Cammell, who committed suicide in 1996, and Fox’s unusually immersive approach to playing a thug.