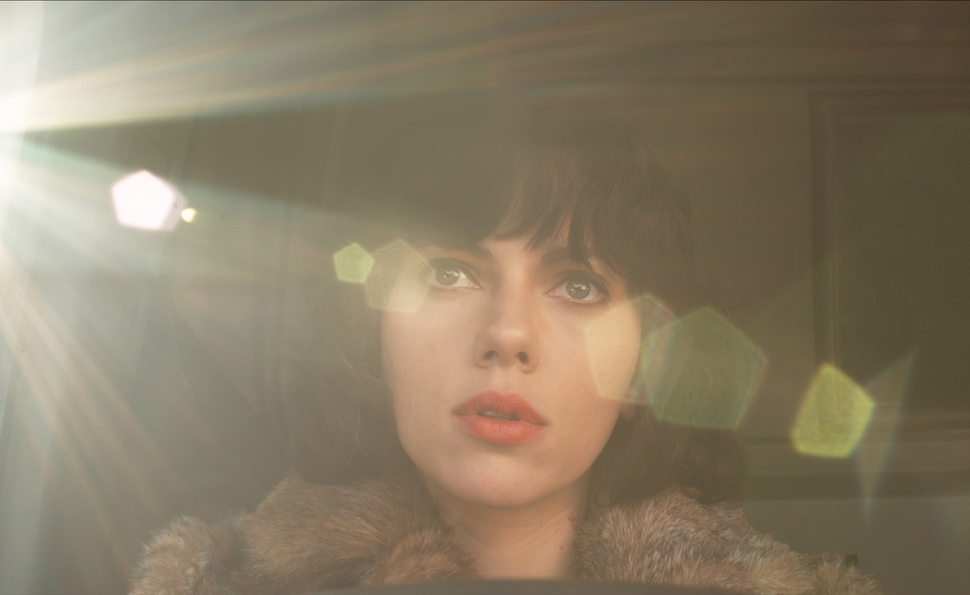 Without a single word of narration, Jonathan Glazer’s adaptation of Michel Faber’s novel Under The Skin gets across one woman’s perspective—which isn’t easy, given that she’s an alien. Faber had the benefit of his own prose to describe what was going through the head of his heroine, Isserley: He inventoried her anxieties as she drove down Scottish motorways, looking for men to seduce and ensnare. Glazer’s main character—now named “Laura,” and played by Scarlett Johansson—reveals nothing of herself directly. She’s a single-minded huntress, who talks with men as though she’s reading from a script, knowing all she has to do is show any interest, and most of her prey will eagerly hop into her trap. But every now and then, Glazer shows Laura out of her element, at a shopping mall or a nightclub, and her bafflement is almost poignant. And sometimes Glazer shows Laura very much in her element, and it’s the audience’s turn to be baffled, as the screen and the soundtrack become an overwhelming flood of scary abstraction.

The movie Under The Skin is bold, and in some ways strikingly different from the novel. While the book was a character sketch overlaid with a cheeky anti-ranching analogy/critique (related to what happens to the men Isserley catches), the movie is overtly cinematic, using the book’s rough outline for a series of setpieces: some bizarrely visionary, some creepily mundane. The former are likely to get the most attention, from art-film devotees and genre buffs alike. Long stretches of Under The Skin resemble a hybrid of Stanley Kubrick films, shifting from the head-trip sensation of 2001’s stargate sequence to The Shining’s ominous tracking shots to A Clockwork Orange’s depictions of a crumbling United Kingdom fraught with peril.

Glazer puts all this into scenes that play out like a classier version of a science-fiction/horror film—one of those cheesy ones about a monster in human form. Glazer’s avoidance of the visual grammar of B-movies makes Under The Skin more terrifying, because it’s harder for viewers to adjust to what’s actually happening. Early in the film, when Laura is being readied for her mission, the backdrop is a blank white, with no sense of where a floor ends and a wall begins; later, when men come back to her unassuming lair, they walk into a pool of inky black, dotted with grayish blobs that look only vaguely familiar. Meanwhile, Mica Levi’s score plays directly on the audience’s nerves, mirroring the movie in the way it uses recognizable instruments and to disorient viewers.

The mundane parts of Under The Skin are even more daring in their way. To document Laura’s hunts, Glazer sent Johansson out in a van equipped with hidden cameras and microphones, and had her stop and chat with ordinary guys on the street. Johansson never breaks character; she fakes her way through social interactions, repeating what people say to her with a thin smile and a blank stare. Between the thick accents of Laura’s potential victims and her own inability to understand humanity, Under The Skin becomes like a documentary, made by aliens, about life in Scottish cities and towns. There’s even a touch of Lynne Ramsay’s Morvern Callar to Laura’s story, as Glazer asks the audience to look through the eyes of a mostly silent misfit, muddling her way through Scotland. Only the discordant music and some intentionally choppy editing connects the softer Under The Skin scenes to the sojourns into other dimensions.

For the first hour of Under The Skin, Glazer strikes a good balance between quietly curious and gasp-inducing, with the only nod to anything like a plot being the occasional appearance of a motorcycle-riding “cleaner” who fixes Laura’s mistakes. Then Laura makes an unexpected choice, and the movie belatedly develops a story—maybe more of one than it needs.

But the last third of Under The Skin serves a purpose, beyond providing the simple satisfaction of a narrative and an ending. In the last stretch of the film, Laura is led into the unknown in the same way she used to lead others, and Glazer flips her circumstances step-by-step, as she ventures into darkness, she crosses water, she comes to an ordinary-looking home, and so on. Glazer doesn’t call attention to any of this, because there’s nothing inherently extraordinary about a forest, a creek, or a house. They’re of Earth—and this isn’t a movie about Earth. The extraordinary achievement of Under The Skin is that while Laura develops some human qualities, Glazer resists the temptation to turn this alien’s story into the story of what it means to be human. The film becomes less jarring as it goes along, but it’s still about a creature who has trouble comprehending pop music, sitcoms, cake, or sex. Under The Skin is an exercise in identifying with the unknowable, and its ultimate conclusion is that while some acclimation is attainable, it’s never a clean fit.