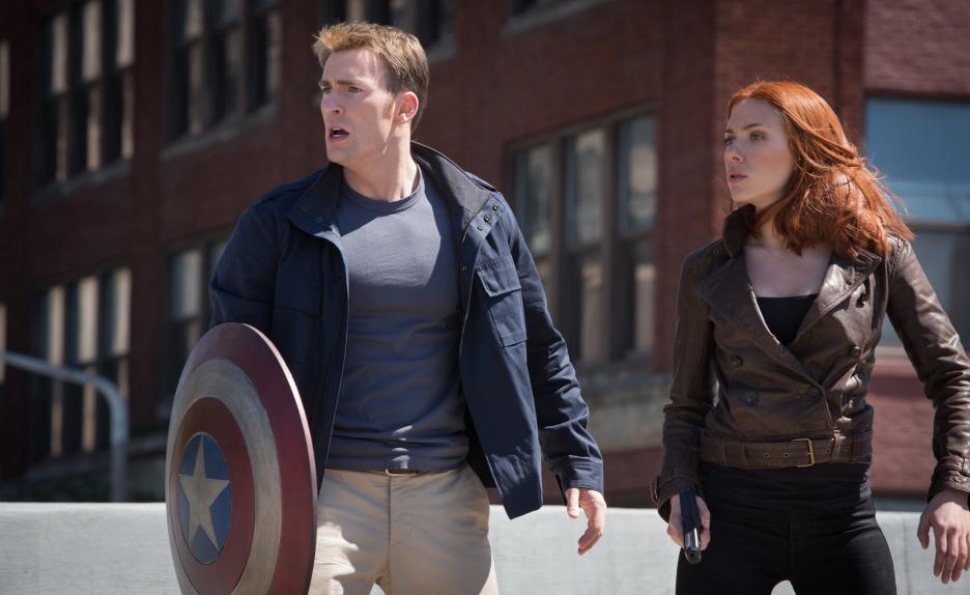 The Batman of the Christopher Nolan trilogy is a hero of the times—the one we deserve, the one shaped by the dark, anxious, complicated world in which we now inhabit. The Captain America of Captain America: The Winter Soldier is a hero for the times—the one we need, the beacon of light that cuts through the fog. Even now that he’s a bulked-out superhero who’s seen plenty of action, Steve Rogers is still the same runty, pre-serum little scrapper who tried to enlist half a dozen times in the first Captain America, before finally being taken on as a project. He’s not a leader by nature, and he isn’t inclined to overthink or question a mission; he just trusts the higher-ups will point him toward the people who need clobbering. If they fail him, he’s lost. He’s the one hero left who’s capable of disillusionment.

Though the film’s references to surveillance and drone warfare are contemporary, The Winter Soldier smartly integrates a crisply orchestrated Marvel action movie with the paranoid thrillers of the 1970s, which were pegged to a mistrust of government and the shadow organizations orbiting it. It’s no coincidence that Robert Redford, star of 1975’s Three Days Of The Condor, appears here in a supporting role, and the film suggests a continuity between America after Watergate and the America of today, which is dealing with a security apparatus that often seems more intrusive than protective. That’s not to say that the new Captain America is a John le Carré-esque chin-scratcher, but the film hits those deeper themes in stride, making them the natural outgrowth of a plot that finds Cap asserting himself as a different kind of perfect soldier—one who questions his mission and makes certain it meets a high (yet simple) moral standard.

But first, there’s ass-kicking to be done, and done righteously. When a group of high-tech pirates capture a S.H.I.E.L.D. vessel, Rogers (Chris Evans) and fellow S.H.I.E.L.D. agent Natasha Romanoff (Scarlett Johansson) lead a successful mission to free the hostages, but a side mission that has Romanoff retrieving data from the ship’s computers troubles him. When he questions S.H.I.E.L.D. boss Nick Fury (Samuel L. Jackson), Rogers gets introduced to Operation: Insight, a secret project that involves building three satellite-linked Helicarriers capable of zapping hundreds of thousands of individual threats at once. It’s preemptive warfare writ large, a mega-drone that analyzes potential terrorists and troublemakers and takes them out before they can strike. (Something is in the air: The latest RoboCop has an army of ED-209s doing the same remote patrolling and killing abroad.)

The secrecy with which Fury goes about his business bothers Rogers, and these aerial warships designed to protect through extrajudicial killing bothers him more, but there’s a range of other characters and complications to face in the meantime. The nefarious HYDRA organization has unleashed its answer to Captain America in the Winter Soldier (Sebastian Stan), a brainwashed assassin with a mysterious past. There’s also more intrigue in the form of Alexander Pierce (Redford), a S.H.I.E.L.D. representative and Insight advocate on the World Security Council, and Sam Wilson (Anthony Mackie), an ex-paratrooper who has fashioned a homemade solution to remaining in aerial combat.

Arriving in the middle of Phase Two of the Marvel Cinematic Universe, The Winter Soldier is among the best of the nine films released so far—roughly on par with the first Iron Man and The Avengers—but if the film has one major flaw, it’s the obligation to serve a larger franchise that keeps taking on weight. Directors Anthony and Joe Russo—who previously directed the inauspicious likes of Welcome To Colinwood and You, Me, And Dupree, but found success on the cult TV shows Arrested Development and Community—have made the tightest possible 136-minute behemoth. But a behemoth it is, larded with superfluous characters and plot elements that may be good for the Marvel Cinematic Universe, but are unhealthy for this particular movie.

Still, none of the extraneous elements are bad elements, and the film excels where it matters: In Hong Kong-style action sequences that fuse martial-arts choreography with good old-fashioned pyrotechnics, in a political framework that gracefully updates post-Watergate paranoia, and in the chemistry between Rogers and Romanoff—one a naïve can-do type whose ideals are shaken, the other a shapeshifter who’s trying to do what’s right. After their long exodus from movies, the Russos have returned as consummate craftsmen who can deploy the pop-culture savvy of their TV shows. The Winter Soldier is the more serious of the two Captain America movies, with none of the retro pizzazz of the first film’s World War II-era sequences. But it could never be described as austere or “gritty” in the style of trendy superheroes. Captain America would never stand for it. He isn’t the brooding type.