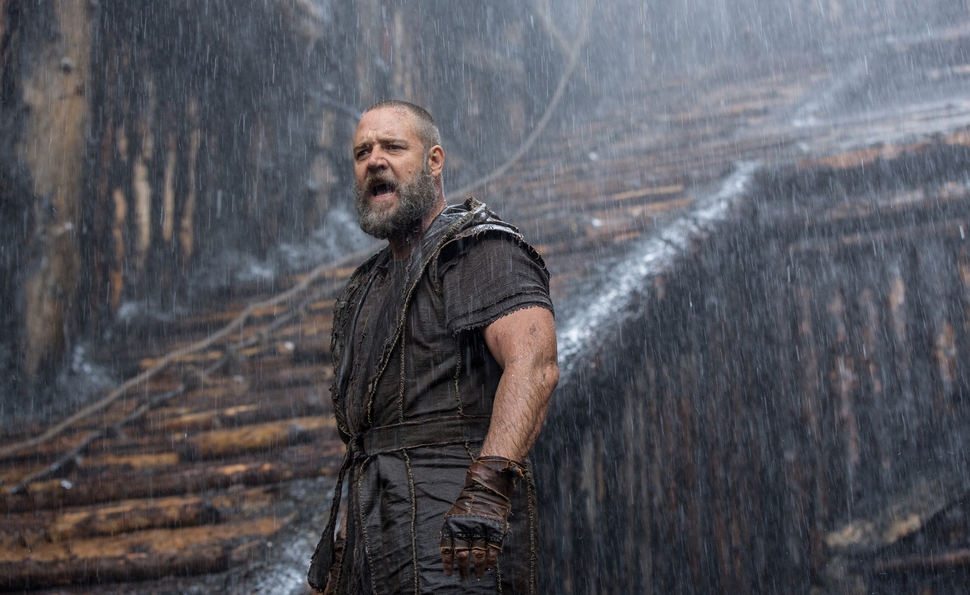 If any year has offered proof that movies run in cycles, it’s been 2014, which has seen a revival of both sword-and-sandal pictures and Biblical epics, both of which seemed terminally unfashionable as recent as a few years ago. Where Son Of God didn’t offer much new material—literally, since it was largely boiled down from a longer TV miniseries—this December’s Exodus will see what Ridley Scott can do with the story of Moses. There’s little chance, however, that it will be anywhere near as radical as Darren Aronofsky’s Noah, a film liberally adapted from one of the most famous stories in the Biblical book of Genesis. It isn’t that Aronofsky, who co-wrote the film with Ari Handel, has changed the text so much as he’s fleshed it out, filling in blanks that others might not have considered blanks at all, and shading in the existing details. In the process, he reshapes it into a story of faith and its limitations, concerned with fundamental questions about humanity’s role on Earth—and reaching conclusions that teeter on the edge of despair. It’s an unwieldy, sometimes overreaching effort, but the laudable ambition makes it easy to forgive some rough patches.

Noah begins at “In the beginning…” then keeps circling back to it, letting nearly every detail of Noah’s story echo the story of humanity’s fall from grace. Here, Noah (Russell Crowe) inhabits a world that’s far removed from Paradise. One of the last descendants of Seth, the third son of Adam and Eve, Noah has taken to living in the wilderness with his wife Naameh (Jennifer Connelly) and their three sons. They live a Road Warrior-like existence on the fringes of a fading, corrupt industrial civilization created by the sons of Cain. It’s a quiet, fearful life that lets Noah instill his children with a respect for nature. After running from some children of Cain led by Tubal-cain (Ray Winstone), Noah and his family wind up in a barren wasteland presided over by the Watchers, a group of fallen angels condemned to take the form of rock monsters (and voiced, most prominently, by Nick Nolte and Frank Langella). After initially threatening Noah’s family, the Watchers come to see him as blessed, offering him protection and aiding his search for his grandfather Methuselah (Anthony Hopkins, who with this and his work as Odin in the Thor films is apparently attempting to corner the market on wizened patriarchs from all world religions).

Noah’s CGI creatures and action setpieces make the opening section into an unexpected, but largely effective mixture of Bible and blockbuster, an attempt to tell a familiar story in the language of a contemporary fantasy film. Working with his frequent cinematographer Matthew Libatique, Aronofsky largely reduces the palette to grays and browns, with only the occasional dash of green to suggest the possibility of a more verdant world, and frequently lets the scale of the landscape dwarf his human characters. Noah’s Earth is a dangerous, permanently overcast place, whose corrupted state he blames on humanity. In one of the film’s most remarkable sequences, he visits an encampment near the site of his under-construction ark and sees only a teeming mass of sin and cruelty. Coming to the realization that he and his own family carry the same potential within them, he decides the human race should die with him, so the Earth can thrive without it.

For all the liberties Noah takes with the traditional narrative, that thematic element becomes its most significant addition, and it dominates the film once everyone’s aboard the ark. It’s a bold move that the film sometimes struggles to make work dramatically, as Noah comes into conflict with his two oldest sons. Ham (played as an adult by Logan Lerman), has seen the worst of his father’s moral austerity, and feels drawn toward Tubal-cain. Shem (played as an adult by Douglas Booth) is drawn to defend his wife Ila (Emma Watson), whose pregnancy causes Noah to vow infanticide if she should give birth to girls, leaving open the possibility of repopulating the Earth. As Noah becomes more fanatical (and Crowe’s performance more grizzly-bear-like), the film starts to resemble a ship-bound cross between The Shining and The Searchers, making a less-effective shift toward family drama and away from the sweep of the film’s first half.

That’s partly because the first half of Noah finds Aronofsky alternating effortlessly between scales, and mixing remarkable scenes, like a long trip through an ark filled with sleeping animals that gives a sense of the boat’s massiveness, contrasted with tense and tender interactions between Noah’s family members. This is an intimate epic unafraid to offer spectacle, most memorably in a stunning mid-film retelling of the Creation, while remaining rooted in its characters’ fears, hopes, and most tellingly, their doubts. Noah has no shortage of signs and miracles, but they come from a silent God, and remain open to interpretation. There’s no booming voice from above here, and no reassurance that all the death and hard choices were worth it, or will result in a better world. Any answers come from within, and that’s the most radical departure of all.