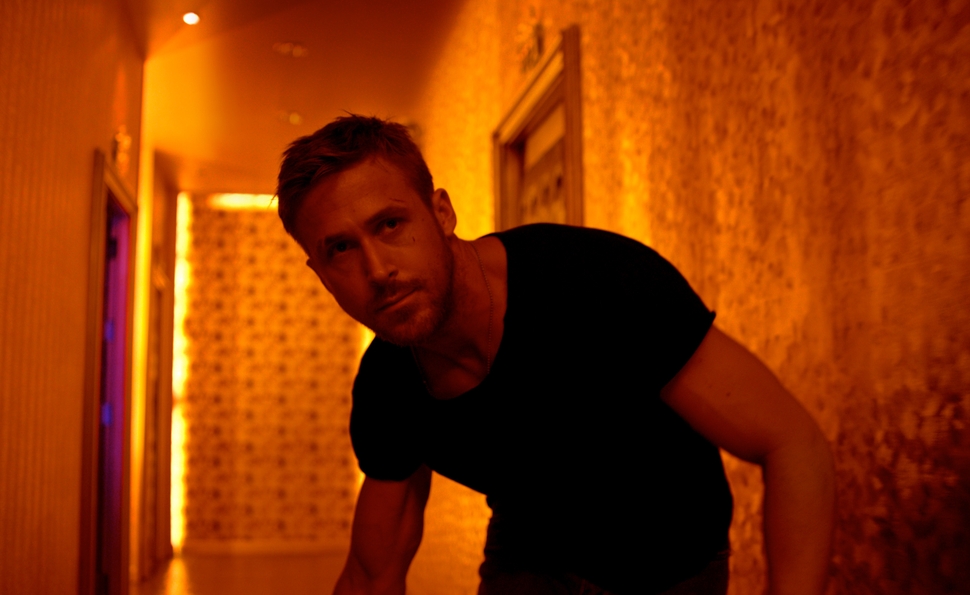 The nocturnal Bangkok of Nicolas Winding Refn’s Only God Forgives has the quality of film noir, but in place of the hard shadows and single-source lighting effects of 1940s and ’50s black-and-white films, Refn directs viewers’ eyes with neon reds and Lynchian blacks. Color palettes are much harder to control than black and white, but every image in the film is breathtakingly vivid and crisp, creating an impression of the city’s underground as an exotic, abstract hellscape where the forces of absolute evil and ultimate judgment co-exist. Refn recently described himself as a “pornographer,” in that he shoots what arouses him—perhaps without thinking through its implications—and Only God Forgives has that dangerously seductive quality. It makes a turn-on out of material that many would find (and have found, based on the boos at Cannes) offensive and irredeemable, if not merely banal.

Furthering the spare, hyper-violent aesthetic of his last two films—the superb six-part Viking saga Valhalla Rising and his English-language breakthrough Drive—Only God Forgives has been so stripped down that its deepest impression is one of brazen unpleasantness. It’s as if Refn, fed up by the tongue-clucking that greets his work in some corners, decided to make a movie specifically to antagonize the people who detest him. The film’s violence isn’t tasteful or “justified”—for those who believe violence must be justifiable, anyway—but a blood-soaked reckoning that serves as its own reason for being. Refn has something on his mind, but appreciating Only God Forgives means first overcoming its numbing brutality and viciousness, which can be a high obstacle to clear. At its worst, the film feels like nihilist chic.

“I want to fuck a 14-year-old,” says the vile Billy (Tom Burke), by way of introduction, but he settles for raping and slaughtering a girl two years older. His actions set off the cycle of revenge that consumes the film, leaving his brother Julian (Ryan Gosling), a boxing-club manager and drug smuggler, in the awkward spot of having to stand up for his family when that makes no moral or practical sense. The underworld has its own criminal-justice system that neither needs nor wants any input from interlopers like Julian. The powers that be, represented by the sword-wielding, seemingly untouchable Chang (Vithaya Pansringarm), let the girl’s father kill Billy, but demand an additional price. But when Julian’s brassy mother Crystal (played by an unrecognizable Kristin Scott Thomas) arrives in Bangkok, she insists that Julian avenge Billy, whatever the repercussions. And if he isn’t willing to do it—he’s a weak boy, in her view—she’ll take care of it herself.

If anything, Gosling has less dialogue here than he does in Drive—in fact, a significant chunk of screen time passes before he says a word—but his silence doesn’t entirely reflect a Man With No Name-style strength. His character is in a terrible spot, and he lacks the certainty to take definitive action: Julian isn’t a decent (much less heroic) person by any means, but his brother’s actions repulse him, and on some level, he feels Billy got what he deserved. He’s also been in Bangkok long enough to understand the consequences of violating the criminal code. The tension in Only God Forgives arises from his tormented, outrageously Oedipal relationship with his mother, who compels him to take measures he knows are foolish—and barring that, ensnares him in her foolish measures. Julian seeks to please her and spare them disaster, and it turns him into a punchy Hamlet, abusing power where he has it (over a prostitute, played by Yayaying Rhatha Phongam) and dithering ineffectually where he doesn’t.

At the twin ends of Only God Forgives, Refn casts Chang as the godlike monster of the title, impassive and final in his judgment, and Crystal as an equally obstinate Mother with a capital M. Both conceits are overwrought—one a graphic cartoon of Eastern badassery, the other a Donatella Versace type given to calling Julian’s girlfriend-for-the-night a “cum dumpster”—but Scott Thomas salvages her character mainly by breaking bad from the genteel types she played in films like The English Patient and The Horse Whisperer. Crystal is Refn’s most grotesque rendering of the Ugly American, rude and entitled, and Scott Thomas makes a delicious meal out of the role.

Nevertheless, Only God Forgives suffers from the disconnect between its stylistic high-art archness and its content’s pulp gratuitousness. Refn gives every sequence a hushed consideration, but there’s rarely a sense that he’s earned it with equivalent profundity in theme, especially when he arrives at a final mother-son scene that takes that relationship to an absurdly literal place. Yet Refn’s filmmaking skills keep on sharpening with each successive effort: Only God Forgives is a sensual wonder, floating an ultra-sleek vision of Bangkok’s hotels, nightclubs, and flophouses on the keys and percussion of another score by Drive composer Cliff Martinez. It’s eye candy with a sour taste.