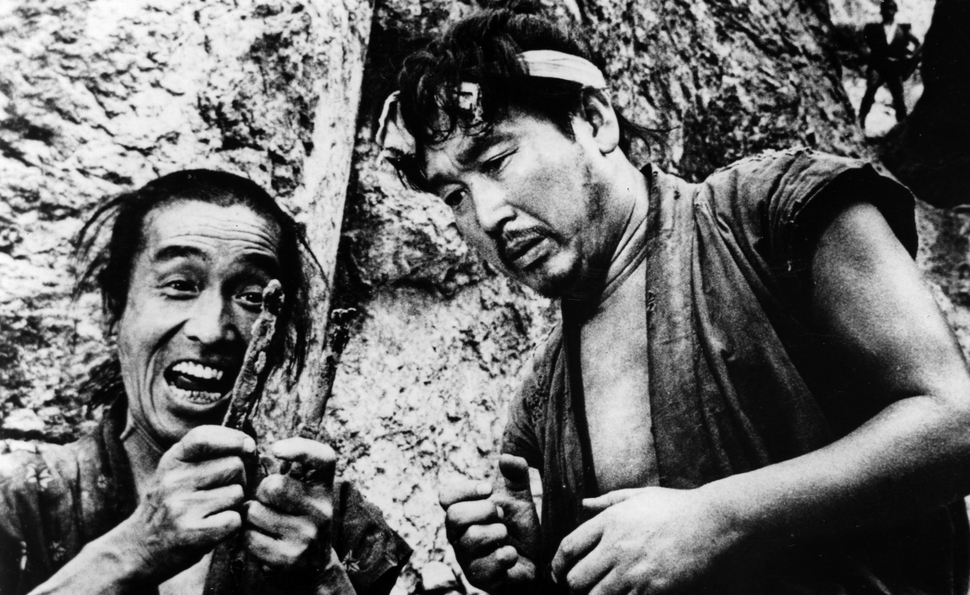 Until Yojimbo surpassed Akira Kurosawa’s The Hidden Fortress at the box office, the latter had the curious distinction of being his most financially successful film, but also one of his least critically respected. Reviewing 1958’s Hidden Fortress in a truncated 90-minute cut for The New York Times, Bosley Crowther referred to Kurosawa “stooping to Hollywoodisms.” In Japan, the film seemed to confirm the opinion of critics suspicious of Kurosawa’s unabashed embrace of Western filmmaking styles. On the one hand, Kurosawa’s skeptics weren’t wrong. The Hidden Fortress is, above all, a roaring piece of entertainment, a Western-like samurai adventure set against the chaos of 16th-century Japan. It’s also more than that—but even if it wasn’t, why complain?

Working in widescreen for the first time in his career, Kurosawa makes his usual impressive use of locations, starting with a long take of two rag-clad peasants—the diminutive Matashichi (Kamatari Fujiwara) and his taller friend Tahei (Minoru Chiaki)—bickering as they cross a barren plain. They’re returning from a battle they missed, arriving just in time to be conscripted into burying bodies. But the war isn’t done with them yet. Soldiers sweep around them, killing a samurai, then riding away as if they were of no consequence—because from where the soldiers sit, peasants don’t matter. It’s a tough world for everyone, but occasionally those with nothing to lose can slip by unnoticed.

That luck, such as it is, doesn’t last long. After quarreling and going their separate ways, Matashichi and Tahei are separately enslaved and forced to work in a ruined castle, then escape together in a rebellion. They’re soon conscripted again, this time caught by their own greed when Makabe Rokurota (Toshirô Mifune at his most leonine), a general on the defeated side, promises them a stake in a tremendous treasure. But unbeknownst to Matashichi and Tahei, Makabe’s real goal is to escort the surviving Princess Yuki (Misa Uehara) back to the safety of her home territory.

Kurosawa stages every scene with an eye toward screen-filling spectacle, crowding a massive staircase set with dozens of extras one moment, using the full length of the Tohoscope frame to capture the space between characters the next, and taking full advantage of the extra space in action sequences as well. But he’s also concerned with the characters’ journey, and how they change—or don’t—along the way. Though comic characters, Matashichi and Tahei remain unrepentant rogues until the end, if anything growing less virtuous as the movie progresses. Uehara was an unknown when Kurosawa cast her, and while her performance largely requires her to pose and look imperious, she still conveys a sense that she’s learned something from being out among the people; her rescuing of a woman from sexual slavery gives the film one of its most touching moments, and a concise example of how virtue gets rewarded. There’s upheaval and disorder in the world of The Hidden Fortress, but also a prevailing sense that right and wrong can still be found in such a world.

The Hidden Fortress’ other claim to fame comes from the famous film it inspired: Star Wars. George Lucas has repeatedly pointed to it as an inspiration, with Matashichi and Tahei serving as models for the much less wicked R2-D2 and C-3P0. And like The Hidden Fortress, Star Wars begins as a story told from the point of view its universe’s lowliest characters, who double as guides for what might otherwise be a confusing world. There’s also a bit of Star Wars in a gripping, lightsaber-inspiring spear duel between Rokurōta and a rival. From there the parallels break down, at least on a story level. But even if Lucas borrowed from Kurosawa more openly than other directors, he was hardly the only one. As Stephen Prince notes on the audio commentary, filmmakers like Sergio Leone were also influenced by the movie—as, doubtlessly, were other movie makers and moviegoers who sought out an entertaining-looking movie with samurai and horses, and found, in Kurosawa’s most crowd-pleasing movie, a way into a corner of film they might otherwise never have considered exploring.

This new Criterion Blu-ray/DVD reissue offers a beautifully restored picture and several other upgrades from the previous DVD release. Catherine Russell provides a context-setting essay. A lengthy excerpt from the 2003 series Akira Kurosawa: It Is Wonderful To Create offers revealing interviews with those involved with the making of the film. The best addition, however, is Prince’s commentary. Like his contributions to other Kurosawa discs, it’s informative and entertaining. Finally, an interview with Lucas gets carried over from the previous Blu-ray version. (He really likes this movie.)