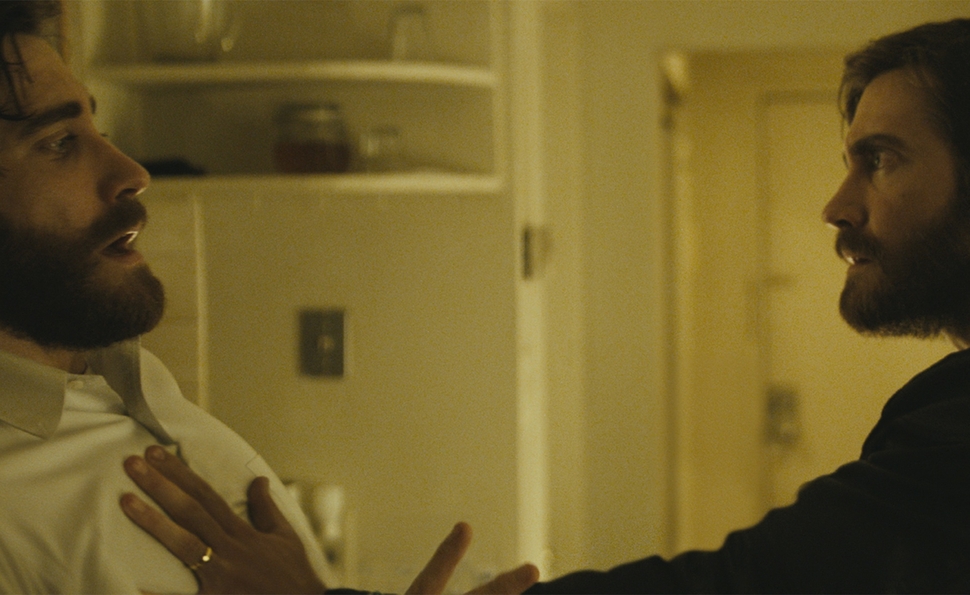 Arachnophobia makes no sense. Humans are far larger than tiny spiders, and while some spiders are venomous, few have enough power to kill. (Only “about a dozen” of the 100,000 species of spiders have venom harmful to humans, according to arachnophiliac.info.) But tell that to folks who freak the hell out when they catch a glimpse of a skittering critter zipping across the bathroom tile. Another thing that makes no sense, but is nonetheless viscerally effective, is Denis Villeneuve’s spider-heavy film Enemy, an adaptation of the novel novel The Double, by Nobel Prize-winning author José Saramago. The film’s epigram reads “chaos is merely order yet to be deciphered.” While a line like that may sound like it’s preceding “How do I know what I see as blue is what you see as blue?”, this movie truly earns this level of far out-ness.

Jake Gyllenhaal stars as Adam, an emotionally catatonic associate-history professor giving the same lectures about totalitarianism each semester, living in a sparsely furnished high-rise, and occasionally having sex with his girlfriend (Mélanie Laurent). When he rents a locally shot movie recommended by a co-worker, he notices a bit player with who looks strikingly like him. Further rentals prove there’s an actor out there who is Adam’s exact double.

At first, Enemy seems to be heading in a Fight Club direction. All of “Daniel Saint Claire”’s credits are a few years old. Maybe our bearded, tweedy quoter of Marx and Hegel got conked on the head and doesn’t remember his time as a thesp? After some clever sleuthing, he discovers that, no, this doppelgänger is living in a different apartment tower across town. But Anthony’s pad (Daniel is a stage name, to add to the false-identity theme) has nicer appliances and furnishings. And his wife, played by Sarah Gadon, bears a physical resemblance to Laurent, except she’s six months pregnant.

The weirdness factor is amplified by a Saunder Jurriaans/Danny Bensi score that dips its spindly legs into atonality, plus a ubiquitous diffusion filter that gives the entire movie a sandblasted look. This is particularly effective given the Toronto setting and Villeneuve’s exploitation of its brutalist architecture. Enemy’s “twins” aspect invokes David Cronenberg’s Dead Ringers, but the film’s look revels in beige concrete in a way not seen since his early films Stereo, Crimes Of The Future, and Shivers.

With dread well established, a creep factor permeates the film, and this is without the psychosexual dream sequences that often feature giant arachnids. The mise en scène brims with symbolic imagery, like the criss-crossing streetcar cables shot from below to resemble spider webs, Ada’s designer sunglasses with an infinity sign as a logo, or street art of a man in modern dress giving a fascist salute. The first act of this movie is a headfirst plunge into an uncomfortable headspace rarely matched—and certainly unexpected, considering Prisoners and Incendies, the more straightforward recent films on Villeneuve’s résumé.

Javier Gullón’s script is a Swiss watch. A clever transition from Adam to Anthony at precisely the 30-minute mark is followed by another bit of narrative sleight-of-hand 30 minutes later. Concerns that there’s no way to maintain this tension throughout the film are, unfortunately, met toward the end. It isn’t that things just get too surreal—David Lynch’s Inland Empire and Mulholland Dr. actually ramp up as they get looser toward the end—but the air simply leaks out of the balloon.

Villeneuve’s decision to focus so much on ambience prevents the characters from resembling real people. A pivotal scene with Mom (Isabella Rossellini) is used effectively to pour more fuel on the ambivalence fire. The scene—and the film—don’t require someone to pop in and give logical explanations for this mystery, but this was the opportunity to provide emotional color to these characters. Other than figuring out why the hell they have a duplicate running around town, what do these characters want?

Even with a final third that doesn’t deliver on the setup, the movie more than makes it across the finish line. It’s hard to criticize too much, especially when there are low-angle short-lens dollies of Gyllenhaal framed like an insect on a motorbike with flaking paint connoting “red in tooth and claw.” Predatory sexuality drives the second half of the movie, leading to something of a wife/girlfriend swap. (The women are positioned as not much more than possessions, which ought to inspire some discussion.) While viewers may identify with Adam because they’re drawn into his world, the jury’s still out on whether they’re supposed to like him. Nevertheless, for a tone poem on loneliness, fluid identity, and photogenic apartments, Enemy is the best entry in the genre since Roman Polanski’s The Tenant. And the last five minutes are just as unpredictable.