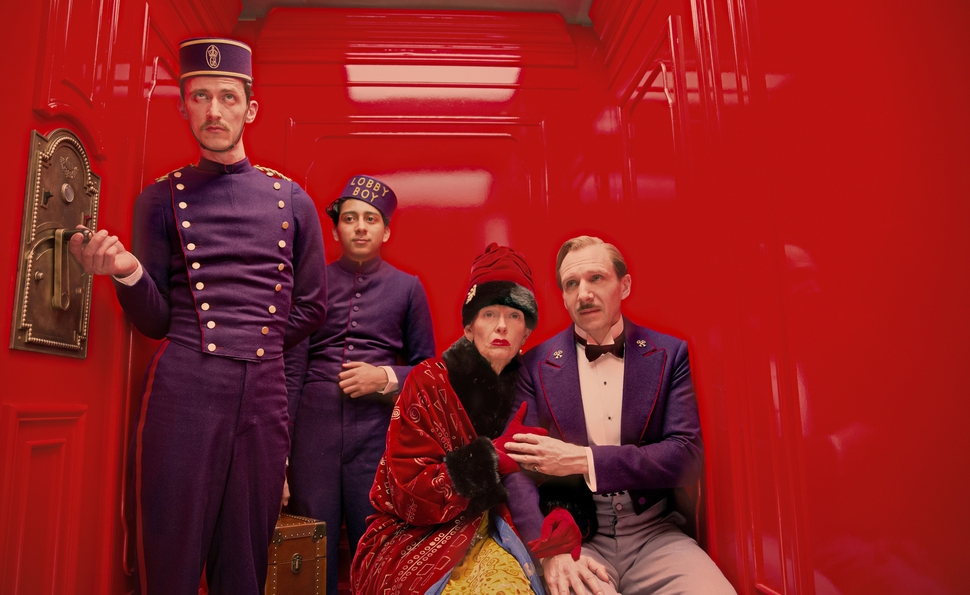 In most circumstances, it would be an insult (or at least a backhanded compliment) to describe the films of Wes Anderson has having the craftsmanship of a Swiss watch, with lots of tiny gears, springs, and levers tick-tick-tick-ing along in perfect syncopation. It makes them sound cold, mechanical, and absent of spontaneity and life, a closed system that forbids contributions from any other hand. Anderson’s latest, The Grand Budapest Hotel, will not shake that impression—it makes the Rube Goldberg machines of Jean-Pierre Jeunet (Amélie) look like crude cave drawings by comparison—but it makes the best possible argument in favor of artistic fussiness, packing layers of allusions, characters, jokes, plot turns, and emotion into a film that carries itself with the lightness of a soufflé. There’s nothing lost in his continued refinement of style; if anything, it makes the pleasures of his work that much more acute.

Much like the family brownstone in The Royal Tenenbaums, the eponymous hotel stands as a remnant of a more glorious past, a crumbling edifice that Anderson touchingly seeks to make whole again. Structured like a Russian nesting doll, The Grand Budapest Hotel tells stories within stories within stories, starting in 1985 at the grave of a writer (Tom Wilkinson) who once visited the once-bustling gem, which sits upon a mountaintop in the fictional Eastern European country of Zubrowka. Flash back to 1968, when the author (now played by Jude Law) joins the gregarious owner, Zero Moustafa (F. Murray Abraham), for a feast in the hotel’s cavernous dining room, and Moustafa regales him with tall tales about the hotel’s glory days, before the ravages of World War II and communism had their way with it.

Flash back again to the 1930s, when concierge Monsieur Gustave H. (Ralph Fiennes) was running the place at its opulent peak, and Moustafa (now played by Tony Revolori) was his awed protégé, occupying the side-cart to a great adventure. Among the services Gustave offers is intimacy with the hotel’s aging, wealthier clientele, most notably Madame D. (Tilda Swinton), an 84-year-old in pancake makeup. When Madame D. dies, Gustave and Moustafa arrive for the inquest, where they’re informed that the deceased has bequeathed an extremely valuable painting to Gustave. In the process, she passes over her children, including her hilariously apoplectic son (Adrien Brody), who dispatches his vicious henchman (Willem Dafoe) to hunt down Gustave and the painting. Also in the picture are an elusive butler (Mathieu Amalric), the besieged executor (Jeff Goldblum) of Madame D.’s multiple wills, an SS-like military officer (Edward Norton), and a young woman (Saoirse Ronan) with a distinctive birthmark who offers cover support for Gustave and Moustafa.

That all may sound hopelessly convoluted, but Anderson makes certain that it isn’t. The Grand Budapest Hotel is first and foremost a caper, and that requires clarity and snap, the orchestration of many moving parts—which here include three distinct timelines, a mad cross-country dash involving parties motivated by greed or justice, the inner workings of a secret society of concierges, and the vile encroachment of war pressing on the borders. Anderson doesn’t sweat a drop in the telling, and his typically bittersweet mix of melancholy and fun tips decisively to the latter here, with such delightful touches as a James Bond-style mountain chase through what appears to be an old Winter Olympics site, a Dafoe performance that’s essentially a live-action variation on the rat he voiced in Fantastic Mr. Fox, and a judicious deployment of profanity in the dialogue. To the audience, he’s mostly playing the concierge here—a professional at their service.

At the same time, Anderson cherishes the opulent bubble of this hotel and the resourceful custodians who protect it, just as his other films cherish the extended families headed by Royal Tenenbaum, Steve Zissou, and Mr. Fox as their worlds deteriorate, too. The nesting-doll structure may seem like cleverness for its own sake, adding a few more plates for Anderson to spin, but there’s a reason The Grand Budapest Hotel doesn’t just stay in the 1930s: He wants to mark the passing of time and mourn it a little. The film isn’t swamped with regret, however, perhaps because such an impossible place never existed beyond the wit and whimsy found in his favorite books, or in films by sophisticated fantasists like Ernst Lubitsch or Michael Powell and Emeric Pressburger. Anderson longs to retreat to such wondrous places—and he keeps getting better at taking audiences there with him.