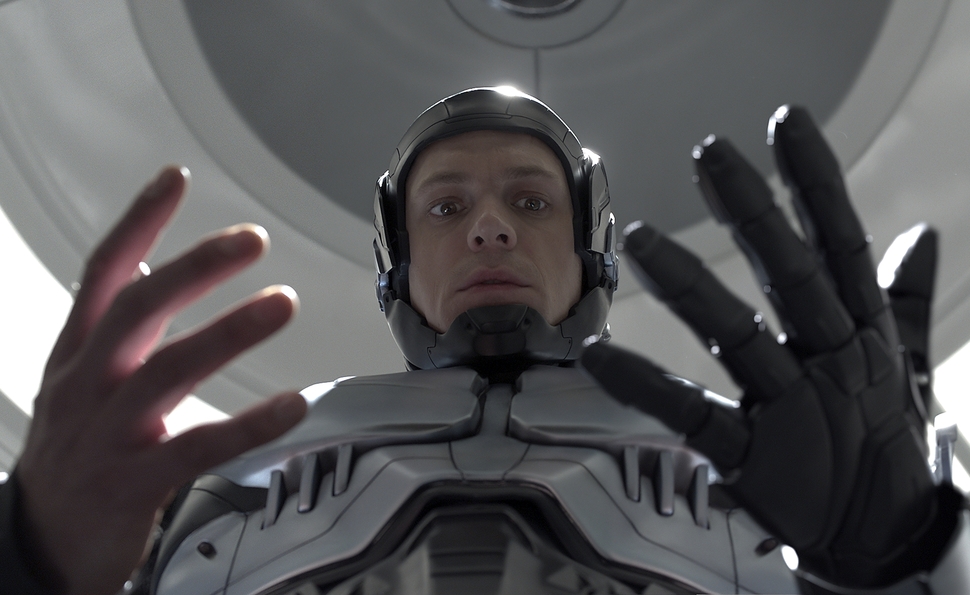 The original 1987 RoboCop, written by Ed Neumeier and Michael Miner, and directed by Paul Verhoeven, is a machine made up of many moving parts: It’s a high-tech action movie in the Terminator mold, but with a sharp, distinctive overlay of science fiction and satire. It’s a comic-book vision that accommodates graphically striking images, extreme violence, and no fewer than three gloriously exuberant bad guys. Perhaps most miraculously, it’s a Hollywood entertainment of subversive artistry during a decade when commerce won handily over art. As with Peter Weller’s half-man/half-machine, there’s the ever-present danger that these opposing elements could come into conflict, but Verhoeven and his collaborators harmonize them beautifully.

There’s no harmony at all to the elements tossed into the new remake of RoboCop, but credit screenwriter Joshua Zetumer and director José Padilha for at least having some elements in play. The whole enterprise whiffs of compromise, confusion, or some combination of the two, starting with the neutering effect of a PG-13 rating, and continuing with an abandoned political agenda, a tedious obsession with gizmos and gadgetry, and a foregrounding of a family story that the original properly relegated to blips of memory. The one consolation is that Zetumer and Padilha aren’t content just to put a gloss on an old hit, like the useless PG-13 remake of Verhoeven’s Total Recall. But the watering-down of their ambition is disappointing in its own way.

In the exhilarating pre-credits sequence, there’s reason to believe the filmmakers have figured out exactly what RoboCop should be in 2014. On a cable news show called The Novak Element—think Bill O’Reilly meets CNN’s Will.I.Am hologram—hawkish host Pat Novak (Samuel L. Jackson) touts the security advancements offered by OmniCorp, a company that’s used robots like ED-209 to bring order to dangerous cities around the world. Though American citizens would still rather have humans police their streets, Novak counters with a live report from Tehran, where the machines are successfully keeping the peace—by turning the city into a hellish, terrifying, drone-patrolled police state. Novak’s point doubles as the film’s nastiest dig at U.S. policy: Why should any American lives be lost when any and all threats can be handled remotely?

Then up come the credits and down goes the movie, though again, the premise has a lot of possibilities. With a law on the books forbidding the use of armed drones in America, OmniCorp CEO Raymond Sellars (Michael Keaton) seeks to turn public opinion around—or simply slip the law altogether—by creating a machine people can trust. Working in concert with robotics pioneer Dr. Dennett Norton (a superb Gary Oldman), Sellars devises a hybrid that combines a robot’s control,  precision, and military firepower with the beating heart—and withered body—of a human being. They get the ideal test case in Alex Murphy (The Killing’s Joel Kinnaman), an honest Detroit policeman who all but loses his life to a retaliatory car bomb set by the city’s most vicious crime boss (Patrick Garrow). Desperate to keep some semblance of Murphy in her life and her son’s, his wife Clara (Abbie Cornish) signs his body over to OmniCorp, and he’s reborn as a sleek new breed of 21st-century lawman.

How sleek? This RoboCop spends an absurd amount of time showcasing how great its computer effects look, to the point where it starts to undermine the film’s message about how technological advancement can lead to civil regression. Where Weller’s RoboCop was a man of steel, simple as that, Kinnaman’s is an effects-house demo reel of touchscreens, multi-cam integration, and buffed-out robot exoskeletons. Important elements go into RoboCop’s creation, like Dr. Norton’s ambivalence toward his Frankenstein’s monster, and OmniCorp’s attempts to adjust Murphy’s humanity like the brightness on a television set. But there’s a point at which this RoboCop remake seems to be auditioning to become a Minority Report remake.

Hiring Padilha, a Brazilian director, to helm the new RoboCop brings a pleasing continuity with the original, given the foreign perspective Verhoeven, a Dutchman making his second film in English, brought to American territory. Though Padilha’s work can be hard to read—his documentary Bus 174 and his Elite Squad movies address Rio’s violence and corruption in radically different ways—he’s the type of director who sees himself as politically engaged, no matter how muddled his politics turn out to be. Yet bookending scenes aside, Padilha has been tamed as Verhoeven never was, and he struggles to bring across the heavy artillery when the action calls for it. The mayhem in the Elite Squad movies is more about fomenting chaos than orchestrating action, and Padilha has an uncertain touch here. (Though the severe restrictions imposed by a PG-13 mandate have to be blamed as well.)

On balance, this RoboCop doesn’t feel like Padilha’s RoboCop anyway—or Zetumer’s, for that matter—so much as it resembles a by-committee behemoth without the courage of its convictions. And after an opening sequence as promising as the one here, it needs at least an attempted follow-through, not the jumble of confused ideas and time-wasting effects that take up the bulk of the film. Before 1987, RoboCop existed as an idea, and a potent one at that; now it exists as a property, one that must be protected rather than shared. Whatever blips of subversiveness can be heard over the din are smothered by timidity.