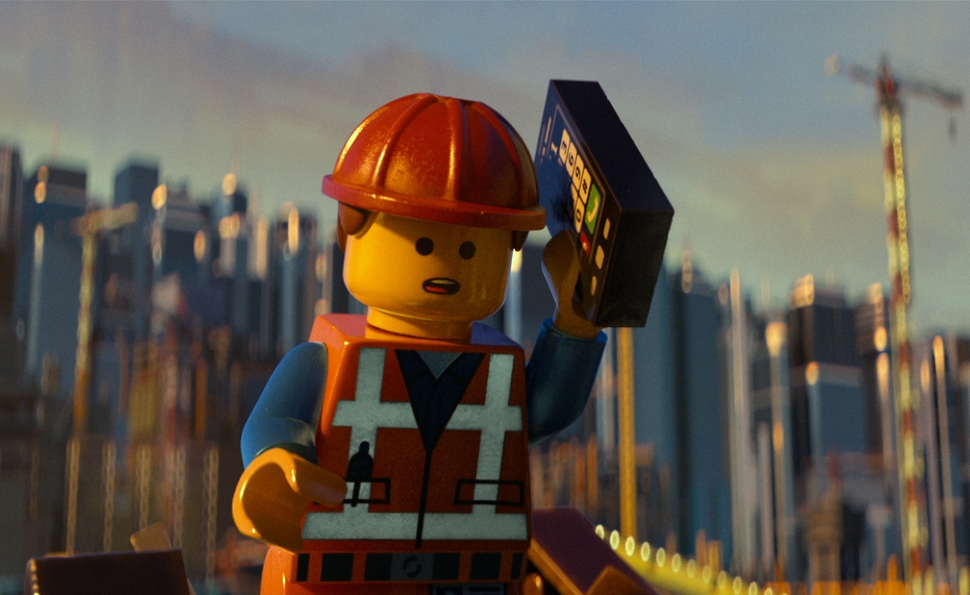 Emmet Brickowoski, the hero of The Lego Movie (voiced by Chris Pratt), is a simple man with simple tastes. He lives in an apartment with a poster for “A Popular Band,” he likes chain restaurants, and he’s perfectly happy with a job as a construction worker that has him tearing down everything “weird” and putting up buildings according to strict guidelines. He follows directions well and lives by a code laid out in the same instruction book everyone else follows. His favorite song is the same as everyone else’s: “Everything Is Awesome.” His only problem: A nagging sense that everything is not awesome.

It isn’t the sort of ennui that keeps him up at night, however, and like everyone else, Emmet spends most of his time going about his day in an orderly fashion, even if he can’t help but be a bit troubled by the vague but dire threats President Business (Will Ferrell) keeps slipping into his public statements. Then, while leaving work one day, he encounters a strange object and a mysterious woman named Wyldstyle (Elizabeth Banks), and shortly discovers he might be The Special, the one prophesied the save the world from what now appears to be impending doom. That is, of course, if Wyldstyle can keep him away from harm long enough to bring him to a group resisting President Business and his oppressive forces.

Those inclined to reduce films to loglines could easily boil The Lego Movie down to “Toy Story meets The Matrix,” but that description fails to capture how much the film plays by rules it seems to be making up as it goes along. For a film that clearly required a small army to make, it often feels thrillingly off-the-cuff, which keeps with The Lego Movie’s themes of creativity and weirdness: Nobody’s following an instruction book with this one. The Lego Movie comes from the team of Phil Lord and Chris Miller, who previously helmed the animated adaptation of Cloudy With A Chance Of Meatballs and the live-action adaptation of 21 Jump Street, both clever, warmhearted films whose central premises didn’t seem capable of being stretched to feature-length. Neither, for that matter, does a movie based around Danish building blocks that have been providing entertainment for kids, and foot injuries for adults, since 1949. But here Lord and Miller tap into why Lego has remained so popular for so long: With enough bricks and inspiration, kids can make little worlds all their own—then take them apart and rearrange them on a whim.

Drawn into the underground, Emmet discovers his new allies include a group of Master Builders with members like Batman (Will Arnett) and mystic sage Vitruvius (Morgan Freeman). Freeman’s performance is the film in miniature: He plays the part of the wise old man, while also cleverly playing against it by getting frustrated at Emmet’s slow-wittedness. Similarly, The Lego Movie sends up elements of the now-familiar, and blockbuster-friendly, “Chosen One” story—at one point, Wyldstyle delivers a flood of exposition, only to be told she needs to repeat it, because Emmet understandably tuned it out—but it also works as one. The film is filled with thrilling setpieces and striking visuals, all of them constructed from tiny plastic bricks.

Or, more accurately, the computer-generated equivalent of tiny plastic bricks. One of The Lego Movie’s strengths comes from Lord and Miller’s decision to embrace the limitations of Lego, making the animated visuals look like they could have been constructed from Lego kits (albeit the biggest, most expensive Lego kits ever made). Characters move with the herky-jerky rhythms of stop-motion animation, fire takes the form of little flame pieces, and one of the main villains, Bad Cop/Good Cop (Liam Neeson), is a man with faces on opposite sides of the same little plastic head.

It certainly works as a feature-length Lego commercial, but it also doubles as a feature-length reminder of how toys can serve as catalysts for creativity, letting kids get lost in worlds the toymakers never imagined. The Lego Movie offers one inventive notion after another, including Nick Offerman as a mecha pirate named Metal Beard who clearly put himself together with parts from un-piratey Lego worlds, and a meeting in which Michelangelo, the Renaissance artist and inventor, sits next to Michelangelo, the Teenage Mutant Ninja Turtle. It’s playtime on film, done with wit, warmth, and respect for the business of imagination.