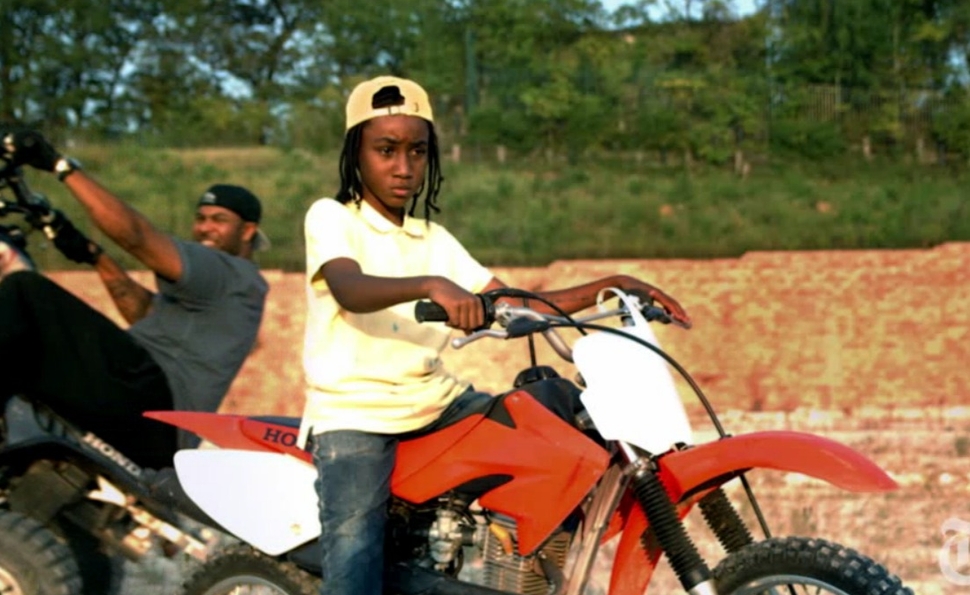 The “12 O’Clock” in Lotfy Nathan’s documentary 12 O’Clock Boys refers to the pinnacle move in the Baltimore dirt-biking scene, when a rider pops a wheelie that sets him virtually perpendicular to the street, front tire straight up to the sky. If this was a symbol rather than a real-life move, it would be too perfect: Here’s a young man, zipping along at high speeds without a helmet, on the precipice between life and death, with his wheel pointed to the heavens. He’s either going to achieve transcendence or ascendance, depending on whether he controls his bike (and his luck) or loses his life to a hitch in balance or a crack in the pavement. For these riders, there is no tomorrow: The pleasure, the power, and the status are all happening today, which makes an outrageous risk seem like a calculated one.

Filmed over a three-year period, 12 O’Clock Boys infiltrates a subculture that Baltimore officially brands as a menace. Roving gangs of dirt-bike and ATV riders, sometimes as many as 100, terrorize neighborhoods from the slums of West Baltimore to the touristy areas near Baltimore Harbor, buzzing around streets and curbs and endlessly taunting the police. Because the danger to drivers and pedestrians is so great, the police are forbidden to give chase, which has the short-term effect of emboldening riders to fuck with their adversaries, and the long-term consequence of their neighborhoods being harangued by helicopters and high-tech surveillance units. It’s a cat-and-mouse game without end, as cops and bikers keep stoking their mutual hostility.

Without underplaying the dead-end recklessness of the dirt-biking scene, Nathan goes to extraordinary lengths to capture the allure for young black men mired in poverty, hostility, and hopelessness. In an artful twist on the guerrilla videos posted on YouTube by gangs like the Wildout Wheelie Boyz, his camera luxuriates in extreme slo-mo shots of bikes at near-vertical, and the looks of absolute joy on the faces of young men who own the streets—at least for the time being. Biking gives them status where they otherwise have none, an outlet for thumbing their noses at the police, and a generalized rebellion that’s common to bikers across many decades and subcultures. (To quote Marlon Brando in The Wild One, “Whaddya got?”) But in these gorgeous sequences—the “ecstatic” part of what Werner Herzog called “ecstatic truth”—the sense of freedom is paramount.

12 O’Clock Boys, like many of the form-breaking docs that have revitalized non-fiction filmmaking in recent years, cuts away the connective tissue that goes into more traditional documentaries, though Nathan leans too heavily on local TV news broadcasts to get basic information across. What shape the film does have is owed to his smart decision to follow Pug, a 13-year-old (10 when the movie starts) who lives for dirt-biking and four-wheeling. He shows Pug losing his oldest brother to an asthma attack, and his mother, Coco, moving him and his remaining siblings into a grim West Baltimore hovel. Pug is a bright, charismatic boy, but he skips school every day, gets into fights with other kids, and defies Coco to such an extent that she’s ready to give him up to the system and focus on raising her other children. His basic survival is a day-to-day miracle that could end at any time.

At times, 12 O’Clock Boys achieves the exalted state of a Terrence Malick movie, with Pug, a naïf on the order of Sissy Spacek in Badlands or Linda Manz in Days Of Heaven, narrating over stylized shots of him wilding out with his boyz. But the film is down to earth where it matters. As reticent as Nathan is to cast explicit judgment, the film shows the tragic impasse between a street culture that’s reckless and provocative, and a police force that exacerbates the problem with heavy-handed tactics. Each side wins its battles. Both are doomed to lose the war.