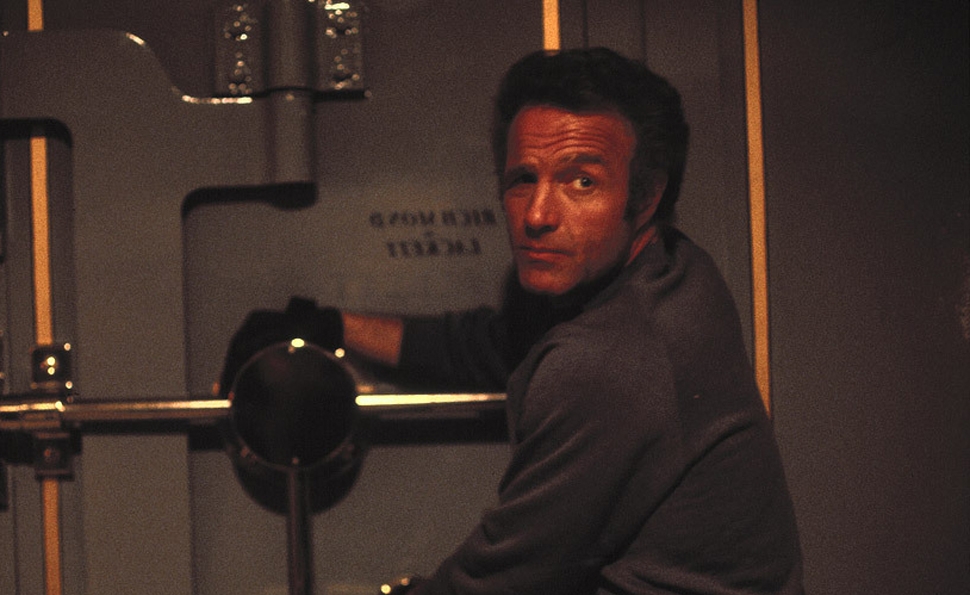 Frank is a professional. That’s the first and most important thing Thief writer-director Michael Mann wants viewers to know about him. Frank isn’t perfect in other areas of his life: He’s impulsive and hot-tempered, and single-minded in a way that robs other people of agency, particularly the pretty cashier he’s forcibly hitched to his wagon. But when it comes to cracking safes and stealing jewels, he knows what he’s doing—and moreover, he expects his crew to play their roles, and he expects payment for services rendered. “Honor among thieves” is a concept he takes seriously, but Frank is doing business in Chicago, where everyone wants a piece of the action, and being a professional is a lonely, perilous endeavor.

Though Thief was a debut feature, its director was already a Mann in full. Themes that recurred later in Mann films like Heat and Miami Vice are already present here, as are the larger-than-life outlaw heroes, the cool blues that dominate his color palette, and the synth-heavy score (by Tangerine Dream) that underscores the action. Debut features are rarely this confident and accomplished, much less such a perfect blueprint of what to expect from a filmmaker down the line. Mann makes movies like Frank cracks safes: His planning and execution are meticulous, and he has a sense of style, too. Frank doesn’t find his criminality any more troubling than does Robert De Niro’s thief in Heat; what bothers him are the scoundrels and incompetents who muck up a well-conceived operation. To that end, it looks like Mann had an easier time of it than Frank does.

Back after 11 years in the clink, Frank (played with Godfather swagger by James Caan) is determined to make a few big scores and retire somewhere warm. In fact, he’s made a postcard collage that details everything he wants in life, including Jessie (Tuesday Weld), a cashier talked out of her reluctance, and a son the two can raise together. In the tradition of “one last job” stories, Frank agrees to take on more risk than usual in order to get the money he needs to retire, which means working with a Chicago mob boss (Robert Prosky) he doesn’t yet trust, and breaking into a bank vault that’s protected by five different alarm systems. (In contrast to silent robberies like the famous centerpiece of Rififi, Frank’s methods are a more sophisticated version of a smash-and-grab, with blowtorches and drills carving holes at maximum volume.) Pulling off such an elaborate heist is challenge enough, but Frank also has to deal with the leeches who want a cut of his operation, from underground heavies to detectives who hound him for a payoff.

Thief is one of the great Chicago movies, and location shooting is only a part of it. While there’s grit and character to The Green Mill, the famed jazz club with ties to Al Capone, or those familiar street scenes under the rumbling el tracks downtown, Mann extends that to a more comprehensive treatment of “the Chicago Way.” Caan’s Frank is a force of nature, a hardened ex-convict who returns to the criminal life with set ideas about where his life is going to head, and that includes fair expectations for the men he works for and with. But the city itself, with its intricate system of corruption and graft (and its brutal means of enforcing it), is the true villain of Thief, and Mann renders it with a force greater than even Caan at his toughest can muster.

Mann has a talent for making cops into Cops, crooks into Crooks, and heroes into Heroes, for telling stories where stark types of the kind found in noir or crime fiction are transformed into legends. With his imposing certainty, Caan brought him halfway there in Thief, but Mann carries the rest with grandiose style and an emphasis on the details of the job itself. It’s one of those movies that’s so invested in the ins and outs of a specific task that it’s almost like a how-to video, yet Caan and his men have to sweat out hours of terrible labor. They’ve earned their hundreds of thousands in stolen diamonds. And Thief implies they’re entitled to keep every penny.

The most special feature of this Thief Blu-ray is how great it looks compared to previous home-video versions, including a 1995 DVD that renders the film as a first-timer’s rough draft instead of the polished, beautiful, fully realized work it actually is. Unfortunately, the ’95 disc also provides the source of the audio commentary with Mann and Caan, which lacks the disciplined production that’s become the Criterion standard. Mann and Caan plainly enjoy each other’s company, though, and despite some long gaps in the conversation, they share some behind-the-scenes stories and insights, including Mann’s contention that the long scene with Caan and Weld at the Oasis remains the best in his career. Better is a Mann interview by Variety critic Scott Foundas, recorded for the disc, about Chicago’s cynical urban landscape, the discarding of the Frank Hohimer book on which the film was ostensibly based, and what Mann learned from talking to prisoners at Folsom. Caan also gives a new interview, in which he cites Thief among the two or three films he’s most proud of doing, and points out how he never uses a single contraction in his speech. Lastly, Tangerine Dream’s Johannes Schmoelling talks about composing an electronic score with an “otherness of sound,” privileging noise over conventional orchestration.