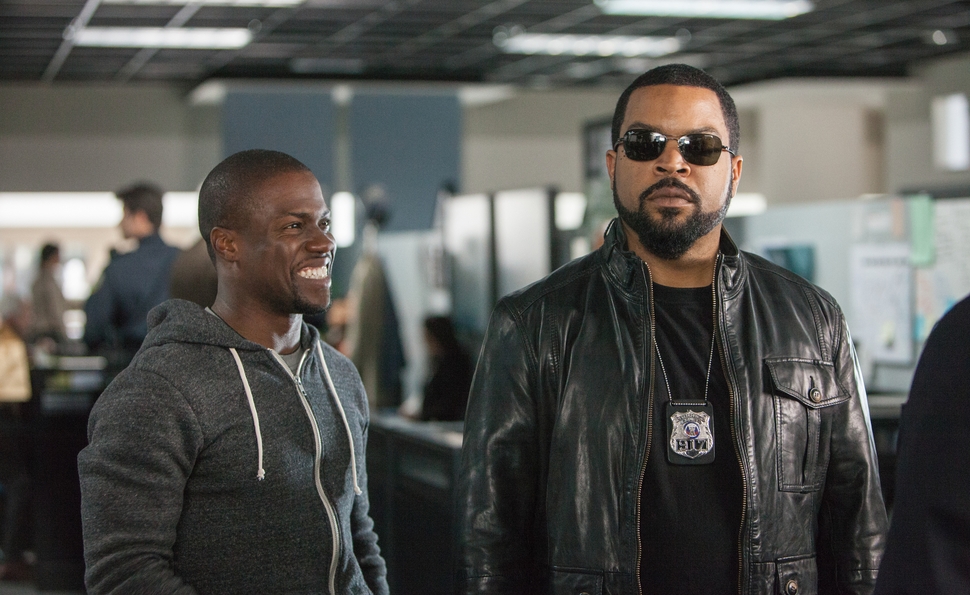 In the action comedy Ride Along, Kevin Hart, the comedian of the moment, embodies a new breed of action hero: the sort that might run away screaming like a little girl at the first sign of trouble. Where Hart’s Ride Along co-star Ice Cube embodies a rigidly conventional conception of gruff, glowering masculinity, all dour authority and steely-eyed toughness, Hart represents something fresher, more subversive, and modern. His characters’ motor-mouthed bravado and swagger is forever undercut by his diminutive frame and high-pitched voice, which regularly veers into dog-whistle registers when he’s agitated and overwhelmed—meaning pretty much constantly. In his inspired stand-up and scene-stealing film roles in films like the recent surprise smash Think Like A Man, Hart is the excitable puppy, trying to hang with the big dogs but not quite figuring out how. The deep strain of self-deprecation in Hart’s comedy is physical as well as verbal: He’s fearless and inventive in contorting his tiny, elastic frame in ridiculous ways. Hart understands intuitively that dignity is the enemy of all great physical comedians.

In Ride Along, Cube plays one of those big dogs, a badass veteran Atlanta cop named James Payton. He essentially repeats his performance as a perpetually apoplectic police captain in 21 Jump Street, only this time, he’s glaring and yelling at a prospective police officer rather than established ones. Payton's grown fiercely protective of his gorgeous sister Angela (Tika Sumpter) since their parents’ death. James doesn’t think his sister’s loving but diminutive boyfriend Ben (Hart) is worthy of her, but when Ben asks to go on a ride-along with James to prove his worthiness as a man and a potential fellow police officer, James accepts, hoping to scare Ben off police work and from wanting to marry James’ sister. James deliberately seeks out the kind of loopy, Reno 911!-style cases—the kooks, the crazies, the frothing nutballs—designed to challenge Ben’s perpetually imperiled masculinity. Ben accidentally insults tough bikers, gets bullied by a small child, and has an embarrassing altercation with a nearly naked man slathering himself with honey in public. Ben’s toughness is constantly challenged, and constantly found lacking, while James smirks in the background.

Then the film takes a turn; Ben stops being a hapless target for James’ abuse, and begins to redeem himself as a man and a future lawman. Ben’s swagger is of the purely digital variety, a product of his self-styled glory as videogamer “Black Hammer,” but damned if those videogames don’t give Ben the skills necessary to crack the big case.

Ride Along plays its mismatched-buddy-cop clichés straight, embodying the slick, familiar formula 21 Jump Street spoofed so adroitly, meaning there’s never any question that Cube’s scowl of angry disapproval will eventually melt into a scowl of grudging acceptance once Ben proves himself, and that these foes will emerge friends. Cube has seemingly spent the past two decades searching for a comic foil who fit him as perfectly as Chris Tucker in Friday, and he seems to have found one in Hart, who’s every bit as manic and expressive as Tucker, but adds his own intriguing metrosexual element.

Ride Along is at its best when Hart wiggles free of the strictures of formula and locks onto an inspired riff, like when he discourses extensively on rainbows while loopy on hospital morphine after getting shot, or when it delves into Hart’s nerdy immersion in gamer culture. To its credit, Ride Along ultimately respects Hart’s unique take on masculinity, acknowledging that a guy whose aggression takes place entirely in the virtual realm of videogames, who is healthily and understandably obsessed with his beautiful girlfriend, and who thinks his way through problems is every bit as much a man as a traditional tough guy like Cube.

This is time-worn, overly familiar material, indifferently directed by journeyman Tim Story, but Hart’s manic comic invention and textured persona elevates it somewhere beyond the level of pleasing mediocrity onto the slightly more distinguished realm of the agreeable-enough time waster. In January 2014, that’s just about all that can be asked of most movie stars, newly minted or otherwise.