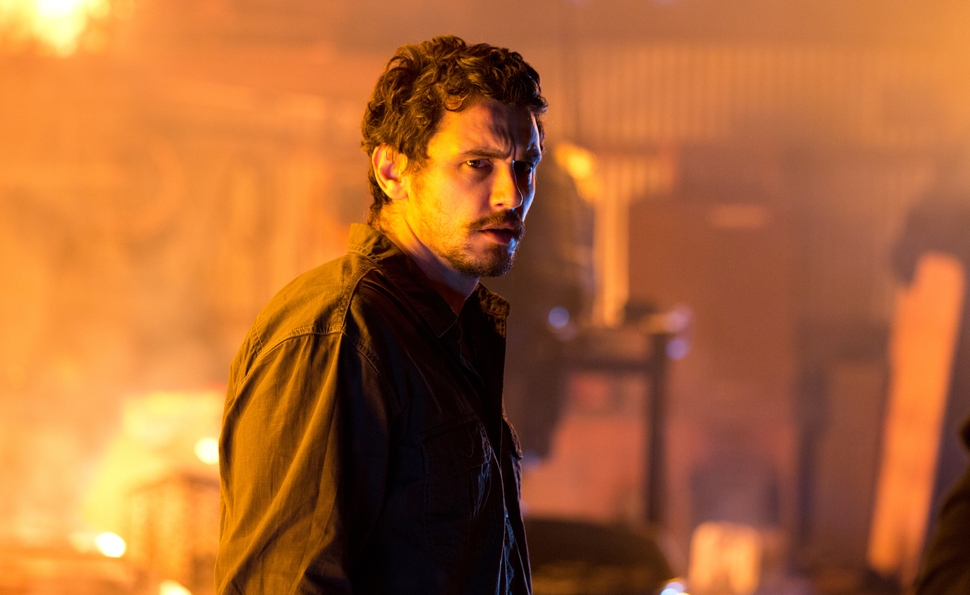 As the wonderfully nicknamed “Gator” Bodine, James Franco swaggers into Homefront like a redneck version of Al Capone in The Untouchables, theatrically threatening a group of tweaker teens stupid enough to impinge on his monopoly over the local meth business. He makes a big entrance, but Franco’s performance is otherwise surprisingly nuanced for a depiction of a meth kingpin named Gator in a dumb-ass Jason Statham vehicle. He furthers his exploits as an actor whose career now represents one big act of performance/conceptual art.

Gator is a bad guy, but more than anything, he’s a pragmatic small businessman forced to deal with the endless headaches that come with running the meth trade in a sleepy backwater town and dealing with oppressive familial obligations. His pain-in-the-ass meth-addict sister Cassie (a scary-skinny Kate Bosworth) never stops making demands, despite his clear dislike for her.

Homefront is only really compelling when it’s exploring the hassles and complexities of being an overwhelmed small-time meth dealer, or when it makes good use of the local color of its backwoods Louisiana setting. It isn’t an encouraging sign when a character ordering black coffee with honey makes a bigger impression than any of the big action setpieces.

The incongruous appearances of Franco and Winona Ryder as hard-living Louisiana outlaws doesn’t make Homefront unique so much as somewhat less generic, as does Sylvester Stallone’s credits as sole screenwriter and producer, but not as an actor. Stallone adapted Chuck Logan’s novel as a vehicle for himself, but when he became too old for the thankless role of Phil Broker, a DEA agent who has appeared in a series of Logan novels, the job fell to his Expendables co-star Statham.

Homefront takes place in the kind of deep-fried Southern small town where everyone knows everyone else’s business, and isn’t afraid to gossip about it whenever possible. So when a single father with the chiseled face of a male model, the body of a Greek god, a giant house, and a British accent moves into town, folks take notice, despite Broker’s Jay Leno-like propensity for rugged, everyman denim ensembles.

Hiding out in the middle of nowhere after a bust gone tragically awry, Broker just wants to raise his 10-year old daughter Maddy (Izabela Vidovic) in a loving, rural environment and do manly physical labor, but fate has other plans for him. The trouble begins when Maddy responds to a chubby kid’s bullying with a vicious beatdown, just as her father taught her. Alas, the little boy happens to be the child of Cassie and her bullied, hectored husband. When Cassie prods her husband to confront Frank, he suffers the fate of seemingly everyone who’s ever tried to beat up a Jason Statham character: He gets his ass kicked.

Cassie decides her family’s honor must be avenged, so she ropes Gator into her revenge plans. When Gator discovers that the town’s mystery man is, in fact, a decorated ex-undercover FBI agent, he decides to use that information to move up the criminal food chain by “delivering” Broker to the imprisoned meth kingpin whose son died in the ill-fated raid that opens the film. Gator ropes old acquaintance/methed-out biker groupie Sheryl Mott (a somewhat miscast Winona Ryder) into helping him with his ill-thought-out scheme, but the situation quickly escalates into an all-out war between the forces of good and evil—wholesome, all-American family values on one side and the druggy burlesque practiced by Gator and his creepy clan on the other.

Homefront’s immersion in the scuzzy world of Louisiana meth-heads gives it a certain sordid flavor, but it’s ultimately yet another movie where Jason Statham glowers, scowls, and tries to keep a low profile before exploding into impressive, extended fits of righteous violence. Statham has an interesting chemistry in his few scenes with Franco, rooted in the actors’ dramatically different personas, but at its core, Homefront is thoroughly generic, a grim exercise in formula whose action sequences are edited into a frenetic, incoherent blur, especially the awful opening setpiece. Statham is proficient as always, but the screenplay does nothing for him beyond provide more excuses for him to kick ass and shoot people in the name of peace and non-violence.