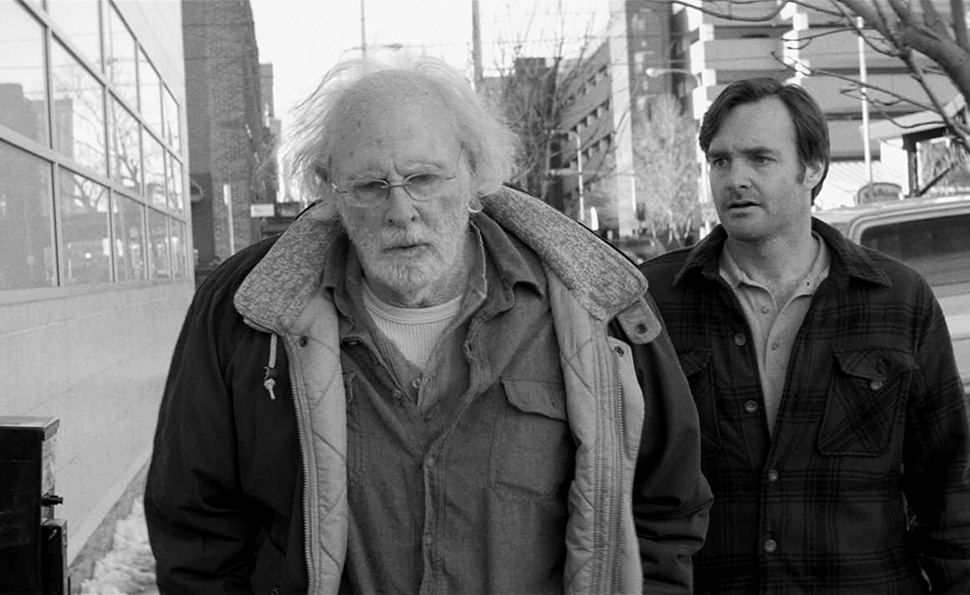 Though Nebraska marks Alexander Payne’s return to the Midwest after excursions to the California coast and Hawaii in Sideways and The Descendants, respectively, he was never as far from home as he seemed. As the expression goes, “You can take the boy out of the Midwest, but you can’t take the Midwest out of the boy.” Payne was able to find the scruffier elements of paradise, from the tacky wood-paneled wine bars of Santa Barbara County to the pockets of Honolulu where ordinary Hawaiians go about their business. Nebraska is a triumphant homecoming for the director of Election and About Schmidt, full of the hallmarks of a Payne production: exquisitely detailed interiors, a perceptive feel for the banalities of everyday life, an understanding of his lead characters’ follies and hidden virtues, and a populist’s heart. But it’s also of a piece with The Descendants, going deeper into the tragicomic issue of what a family inherits from their experiences, and from each other.

While Payne is shooting in black and white, he doesn’t aim for a retro quality from the photography; he’s just evoking the slate-gray expanses of rural Montana and Nebraska, and the dreary timelessness of a one-horse town that stopped growing half a century ago. It’s no coincidence that his star, Bruce Dern, started his career about half a century ago, too, and can readily draw from his history as an actor—and viewers’ history with him. Known best for his irascibility, Dern brings that and a ragged soul to the role of Woody Grant, a demented alcoholic in Billings, Montana who’s among the many retirees duped by a direct-mail million-dollar-sweepstakes scheme. Woody wants to collect his prize personally in Lincoln, Nebraska, but he can’t drive, and he’s caught trying to make the 900-mile trek on foot.

In a desperate bid to please his distant father, Woody’s son David (Will Forte), an electronics salesman, decides to drive Woody to Lincoln himself, without any thought other than indulging his dad’s fantasies for a couple of days. This plan meets the fervent objections of David’s more successful brother Ross (Bob Odenkirk), a local broadcaster dubbed “the Tom Brokaw of Billings,” and their battleaxe of a mother Kate (June Squibb). En route to Lincoln, Woody and David make an extended pit stop in Woody’s home town of Hawthorne, where an old rivalry with a business partner (Stacy Keach) is renewed, and word of his million-dollar haul makes him a local celebrity—and brings out the circling vultures.

Most of Nebraska is waylaid in Hawthorne, the sort of heartland town stuck in a recession that’s extended for decades, perhaps not long after Woody returned from fighting in the Korean War. And like a lot of veterans from that era, Woody carries around secret traumas like a hitch in his gait—nobody knows what he’s seen or done, but it’s crippled him emotionally, and made him fundamentally inaccessible. For David—and later Ross and Kate, who turn up to rescue them—seeing his dad in Hawthorne gives him a chance to tour through the broken remnants of his father’s life and understand the source of his paternal negligence. His discoveries are frequently heartbreaking, but Dern doesn’t make an active play for the audience’s sympathies. He just gets them.

At the same time, Payne doesn’t drown the movie in sentiment, but strikes a careful balance between bawdy humor and wrenching emotion, often at the same time. In fact, the film’s most moving scene is also its funniest: A visit to the graveyard is full of painful revelations about Woody’s extended family and uproarious bits of gossip from Kate, who has absolutely no qualms about speaking ill of the dead. Squibb, who had a brief turn as Jack Nicholson’s wife in About Schmidt, makes the most of her showcase here, running off with scene after scene with what could be described as soulful vulgarity. Woody and Kate’s marriage isn’t of love-for-the-ages kind—in Woody’s telling, it just sort of happened—but there’s a coarse bond between them that runs deeper than expected.

Nebraska is one of Payne’s best films, a near-perfect amalgam of the acrid humor, great local color, and stirring resonances that run through his work. The road-movie genre allows Payne and his screenwriter, Bob Nelson, the freedom to bring in small scenes and subplots that don’t have to drive the narrative forward, like David meeting the publisher of the town newspaper, who happens to be his father’s old flame, or a wordless congregation that gathers to watch the Lions-Bears game on a Sunday, or a hilarious caper involving a stolen air compressor. In the end, Nebraska makes viewers feel like they know this town, this family, and the cantankerous old bastard at its center.