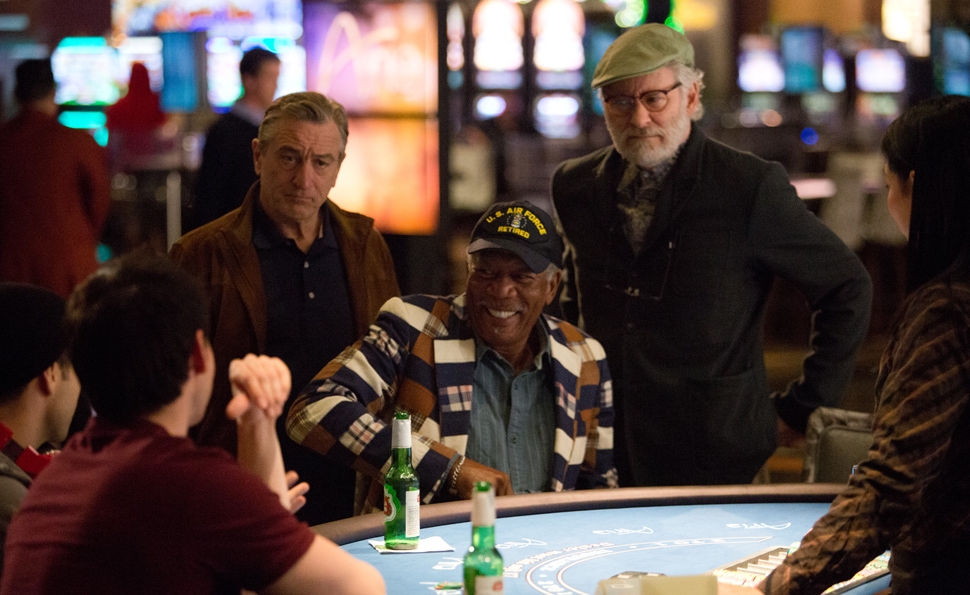 Thirty years ago, it would have seemed far-fetched to imagine Raging Bull star Robert De Niro voluntarily appearing in a movie where his face appeared next to the thrusting crotch of a widely mocked male pop star during a Las Vegas wet-and-wild bikini contest. Even 20 years ago, that seemingly preposterous image might have qualified as a winking gag on The Critic about Hollywood’s sleaziness, and its ability to ensnare even the most distinguished thespians into its web of greed and compromise. But these days, if you tell De Niro that he needs to head to the set to position his face near the Speedo-clad, dangling testicles of LMFAO member RedFoo, he’ll apparently just wearily concede that yeah, that sounds about right, then inquire how much he’s being paid for this particular humiliation.

There are probably entire generations who know De Niro primarily as a scowling old man from a series of dumb comedies that clumsily reference a past where he apparently played mobsters or something. The novelty of De Niro spoofing his image wore out long ago. Who could have guessed that after the success of Analyze This, Billy Crystal would largely stop starring in movies altogether, while De Niro would mostly devote himself to inane slapstick and hammy mugging?

De Niro continues to test audiences’ affection and patience with Last Vegas, a geriatric buddy comedy uniting four Academy Award winners in a comedy-drama that keeps its comic and dramatic elements separated like the discreet components of a McDonald’s McDLT. The first half of the film is devoted to the expected gags involving Viagra, ShamWow, and Florida as God’s waiting room, while the second half sends its characters through an intense gauntlet of life lessons and big speeches.

Last Vegas follows a reunion of four old friends who reunite for the Vegas bachelor party of Billy (Michael Douglas), a successful businessman who realizes, while delivering a eulogy for his mentor, that he isn’t getting any younger, and should probably marry his much younger girlfriend lest he end up dying alone. De Niro scowls his way through the role of Billy’s chief rival, Paddy, a crank who has been in a state of deep depression for a year, following the death of his beloved wife. Paddy has never forgiven Billy for not supporting him through his crisis, but the roots of their conflict go back even further, when they were competing for the same girl. Once the boys are reunited, Paddy and Billy once again end up in a state of romantic competition over Diana (Mary Steenburgen), an attorney-turned-lounge-singer whom both men want, in spite of Billy’s seemingly imminent nuptials.

Morgan Freeman and Kevin Kline round out the supremely overqualified cast as, respectively, Archie, a spunky senior overjoyed to escape the clutches of his loving but overprotective son, and Sam, a bored Florida man whose suspiciously understanding wife gives him an unexpected gift upon dropping him off at the airport: Viagra, a condom, and permission to cheat on her as long as he keeps it a secret.

The nicest thing that can be said about Last Vegas in its early going is that it’s breezy and inoffensive, with the glib surface pleasures of seasoned old pros playing off each other in a low-stakes, high-spirited environment. But the film’s humor is heavily dependent on the notion that older people swearing is inherently hilarious. In fact, it condescendingly imagines that old people doing anything other than drafting wills or grimly contemplating the ever-present specter of death is adorable: Sam’s efforts to cheat on his wife is depicted as absolutely precious, the cutest thing a grandpa type could possibly do, short of leading a kitten parade of some sort.

As Last Vegas groans to a conclusion, however, it loses interest in slapstick shenanigans—though it does find time to send two of its Oscar-winning leads hurtling haplessly into bodies of water—as it piles on big speeches and unearned emotional resolutions. During one particularly shameless stretch, Archie imparts important life lessons to two characters who barely factor into the narrative—Archie’s son (Michael Ealy) and a bully (Jerry Ferrara) in consecutive scenes. If guest stars Redfoo—who shows up to oversee that bikini contest, inexplicably judged by the four lead characters—and 50 Cent, who shows up wanting to hang with the guys, had scored just a few more minutes of screen time, it’s possible Archie would have set them straight with some tough love and pointed advice as well. (“Now, 50 Cents, your life won’t be worth a dollar until you find a woman you respect to share your life with, and learn the true meaning of friendship!”)

Last Vegas sets the bar awfully low for itself. It’s the geriatric equivalent of a ramshackle teen sex comedy, only intermittently elevated by the caliber of the talent involved. Last Vegas closes by teasing a sequel, but by this point, everyone is way too old for this shit, and that includes RedFoo, who is far too dignified a cultural figure to have his good name dragged down by repeatedly appearing in movies with such money-chasing mercenaries. Unlike Robert De Niro, Redfoo still has a reputation to protect.